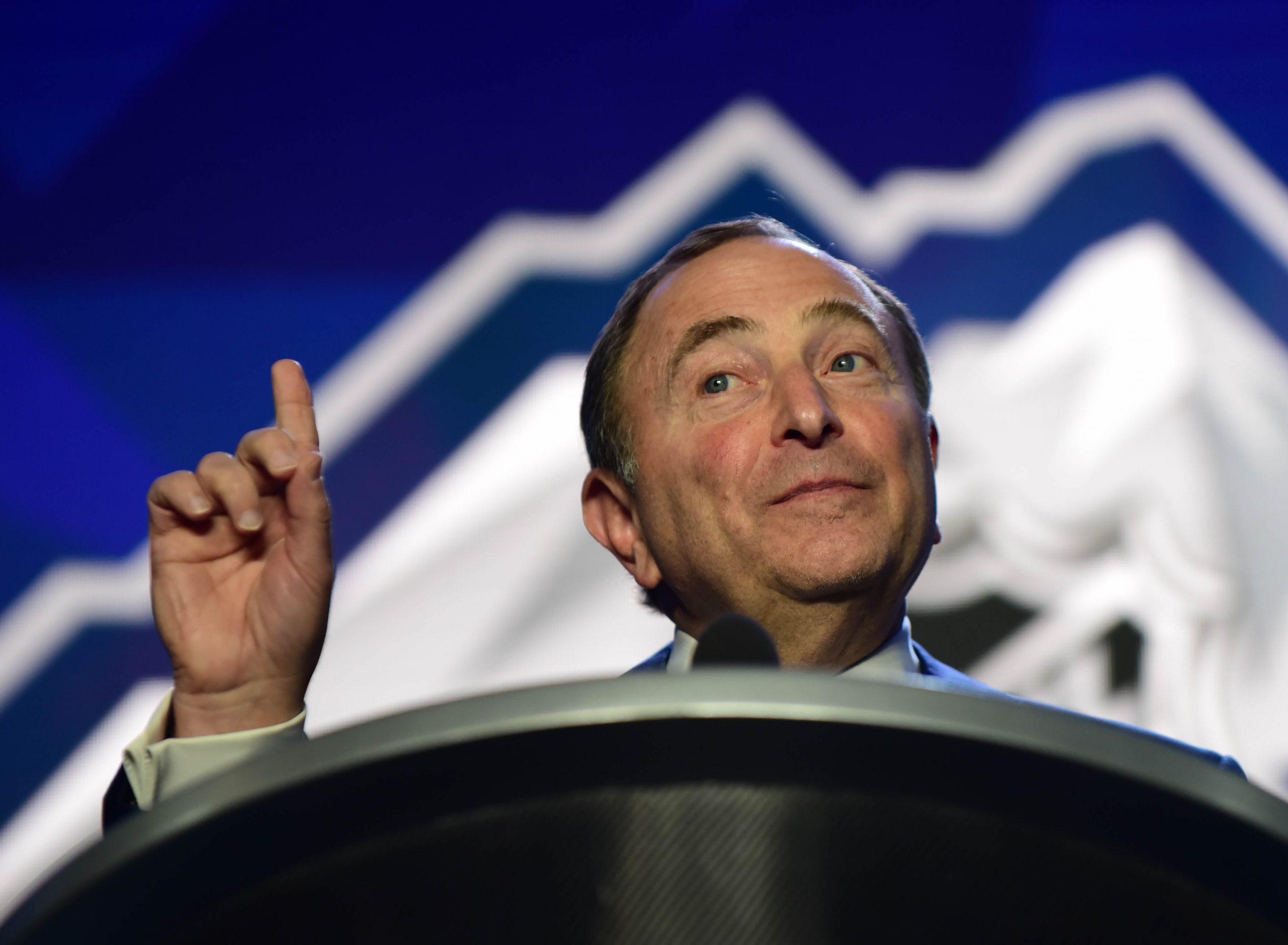 The Stanley Cup was not awarded in 2005 as the NHL locked-out its players under the direction of Gary Bettman for an entire season. The primary goal was to create cost-certainty with the league claiming it had spent a larger percentage of revenue on player salary than other professional sports (it reported a net-loss of $273 million USD for 2002-2003). The lockout lasted 10 months and 6 days and resulted in the cancellation of 1230 games and a net-loss of an estimated $2 billion dollars in revenue. The NHL was successful in imposing a salary cap set to 57 percent of hockey-generated revenue. This was Bettman's second effort at securing a cap via lockout, his first having failed in 1994-1995 after 102 days and the cancellation of 468 games.

In 2012-2013 the NHL again locked-out its players seeking to reduce the cap to 46 percent of hockey-related revenue. Hockey-related revenue was also redefined so that the NHLPA percentage of total revenue was reduced to 43 percent. The lockout resulted in the cancellation of 510 games and an estimated loss of one billion dollars in league revenue. This time the league forfeited 123 days of the season.

The NHL averaged 337 million dollars per season for a total of more than 4.7 billion dollars during the entire period charted above. Teams averaged 12.05 million USD annually. Ten teams reported an average net-loss. The Vegas Golden Knights data consists of 2017-2018 and 2018-2019 only. Atlanta Thrashers data is combined with Winnipeg Jets.

Average annual profit before and after the 2012-2013 lockout

Between 2005 and 2012 fifteen NHL teams lost money on average. This number was reduced to six between 2013 and 2019. Average NHL team profit was 5.15 million before the last lockout and 18.62 after. The Edmonton Oilers profit increased from 11.93 to 19.82. Since the 2005 the Edmonton Oilers' profits have ranged from 8.2 to 25 million dollars and the team has not posted a loss during this time. Data from the lockout shortened season is excluded.

Average annual change in profit since the 2012-2013 lockout 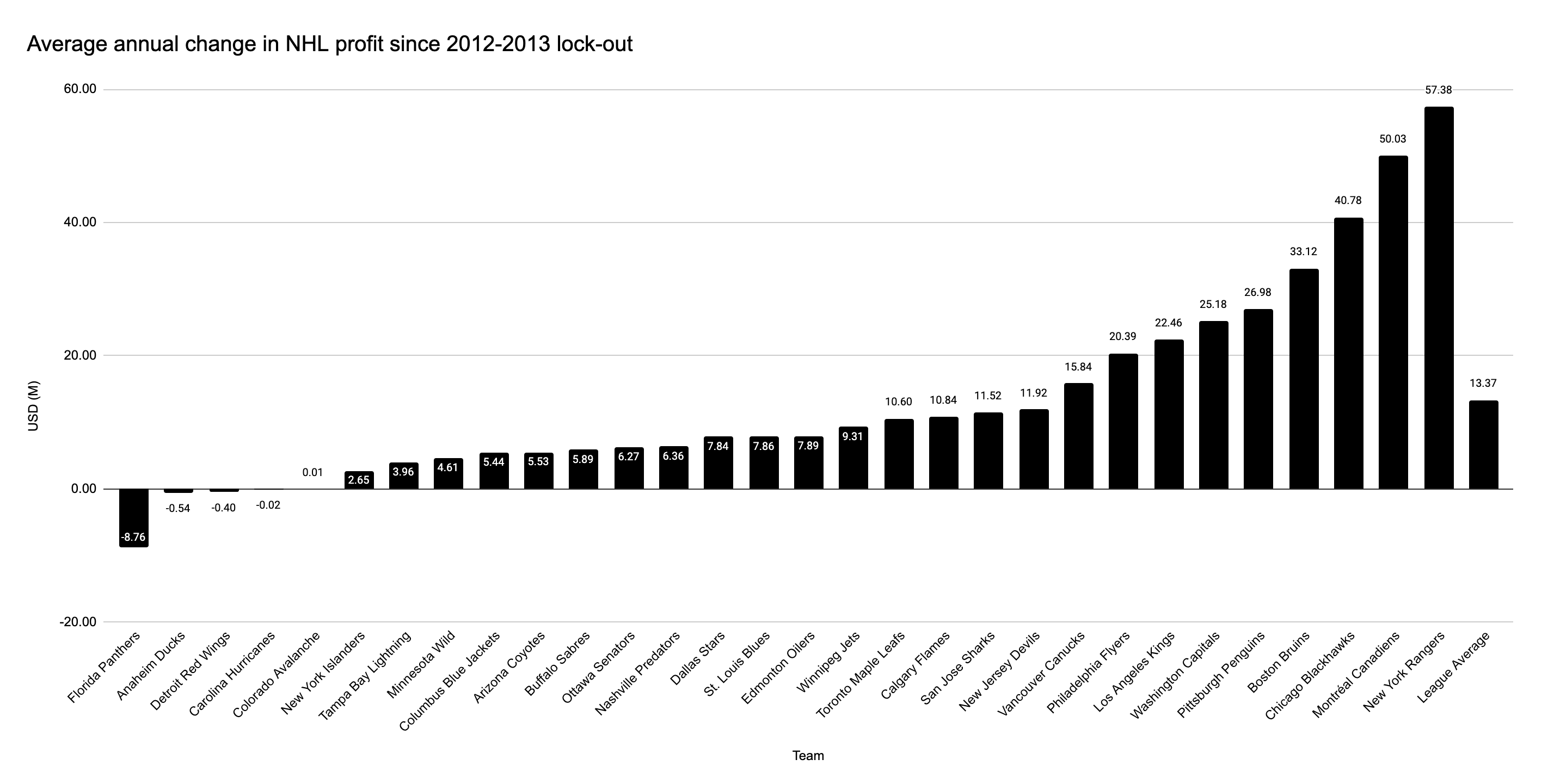 26 NHL teams have observed an average increase in NHL profit since the last lockout. These increases have been 13.37 million USD on average. Some teams, such as the Montreal Canadiens and the New York Rangers, have reported increases of more than 50 million dollars while one team, Florida, has reported average losses. The Edmonton Oilers have seen an an average increase in profit of over 15 million dollars. Data from the lockout shortened season is excluded.

The difficulty presented is one of wealth distribution; there is a large difference in profit between teams. Montreal, New York and Toronto are extremely profitable while several of the southern teams are not (Arizona, Florida, Carolina). The profits made fit the patterns of GDP and wealth in the broader economy with concentrated wealth in the largest urban centres. Nation states solve wealth distribution issues like these with surplus-recycling mechanisms that tax the rich and give to the poor. Wealthier regions in-turn benefit from poorer regions by receiving affordable labour and manufacturing.

Instead of profit redistribution program between teams the league has opted for a salary cap and revenue restructuring that takes money away from the NHLPA. Known exceptions where teams have shared profit include the Arizona Coyotes (who were owned by the league from 2009 to 2013) and the Canadian Assistance Plan.

We are entering a new stage of the COVID crisis where the economy is opening-up and we may be on the verge of NHL hockey to resume in the summer. So far we have lost close to 70 days of the season. The league is eager to push-forward and use the leverage of a lost season on the NHLPA as a means of achieving greater cost certainty. It's particularly within its best interest to do so as the collective bargaining agreement will expire after 2021-2022.

In this COVID-shortened season the league will go looking in the players pockets for help, instead of the pockets of its wealthiest teams and owners: it's already happening in baseball. In the pandemic fall-out its possible that we will also see requests for bailouts and subsidies in order to help some franchises through the shut-downs and low exchange rates. But before the government, fans and players fall for a Bettman directed sob story, they need to keep in mind that the owners had no qualms whatsoever in shutting down for a total of 535 days in pursuit of the salary cap and cost-certainty.