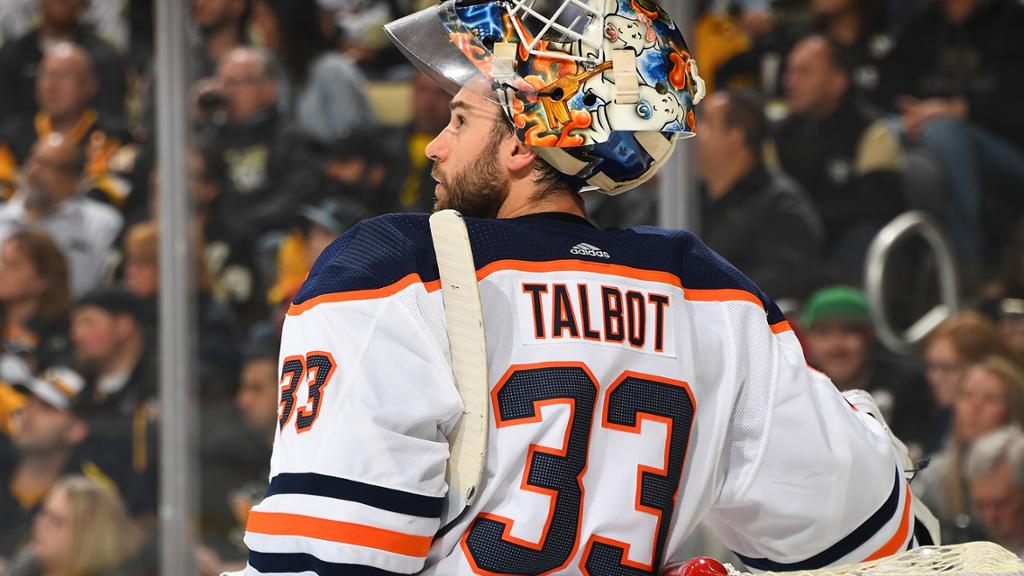 Burger Baron Bobby's Challenge and the Mechanics of the Chiarelli Shake

In the rumourverse surrounding the soon-to-drop 2019 UFA deadline there has been a lot of talk about which goalies the Oilers should pursue. By this move Holland will say something about his willingness to undo the mistakes of his predecessor.

Holland is faced with the kind of mess that only the holiest of orderlies could forgive. On the surface it may well look like Burger Baron Bobby did the Oilers a solid, snapping-up a veteran leader who crafted a dynasty team during the late nineties and early aughts by selecting over-looked European prospects, by prioritizing defensive play and by developing players properly. Holland and Mike Babcock created the best team of the Corsi era, during which time the Oilers were the worst*. Excluding his European fetish (a tactic torn from Glen Sather's playbook), Holland is very un-Oilers and he's not had to deal with this kind of mess before.

The Baron has put before Holland the kind of task that requires the vigour and stubbornness of youth; it's a bit like Fred Rogers leading a motley crew that cut their teeth on 80's easy money, liquor, drugs and women. Make no mistake, Nikki Sixx-Rings and The Great One gave up mullets and cat shirts 20 years ago, but they still don't understand that winning is no longer only about elite talent; Holland gets it. Can Principal Holland bring order to Ridgemont High? We will see, but at this point we should already be doubtful.

Before I dive into what I think we should do regarding goaltending, perhaps I should state the primary failures of the Chiarelli Presidency: he is not risk averse and he has a Coke Machine mentality. Chiarelli stated from the very beginning that he would move the Oilers towards being a bigger "strong on the stick" team. Unfortunately, for the Oilers, Chiarelli bet on long-shots and focused on micro stats instead of having a Gestalt mentality. He made big moves, made big bets, and it seems now everyone pretty much agrees that he made big mistakes.

Chiarelli's penchant for size and his willingness to throw-away good players while betting on long shots is evident in our current goaltending situation. Instead of betting on a player that gave a fantastic season as a starting goaltender -Cam Talbot- Chiarelli opted for the larger long-shot Koskinen (no thanks to Jari Kurri). Holland has the chance to reverse this mistake. .

Here is what I would like to see from Holland.

1. Trade Koskinen to interested parties. It will be easiest to do this before July 1st, as that is the date (to the best of my knowledge) when Koskinen's partial no-trade clause will kick-in. Koskinen's no-trade clause adds to the risk involved with his singing and according to Cap Friendly involves a 15 team no-trade list. I would guess that a current possible destination would be Jarmo Kekäläinen's Blue Jackets. Seeing as how Bobrovsky appears to be on his way out and Kinkaid, who is also UFA, leaves something to be desired, would Jarmo want to go-forward with Koskinen and RFA Korpisalo as his net minders? Would Josh Anderson be on the table? I don't know, but that would be my starting point in negotiations which might also involve Puljujärvi as Kekäläinen is in a unique position to see the value in both of these Finnish players.

2. Sign Talbot to a deal equal-to or slightly greater-than the Koskinen contract. That would involve something like 3 or 4 years at 4.5 million. Talbot is worth it. He deserves to feel that his incredible contribution to this team has been recognized. As part of the deal ask for feedback on the current coaching situation and investigate if there is a better-fit. It's almost impossible to evaluate Dustin Schwartz from our perspective, however, it does seem that a slightly younger Talbot did better under Benoit Allaire. It also seems that Schwartz has had difficulty motivating Oilers' goaltenders through what appears to be an untenable situation: goalies come to Edmonton to die a slow death behind a defense that has consistently been one of the worst in the league.

3. Secure a back-up with a short term contract. Mrázek is known to perform well in a back-up capacity and has good stats. Apparently there have already been discussions between Holland and Mrázek's agent. My second choice would be Cam Ward who can probably pull-out a couple of unexpected victories while playing 30 games.

The bituman Pipeline of Statistics and Reason (thesis) 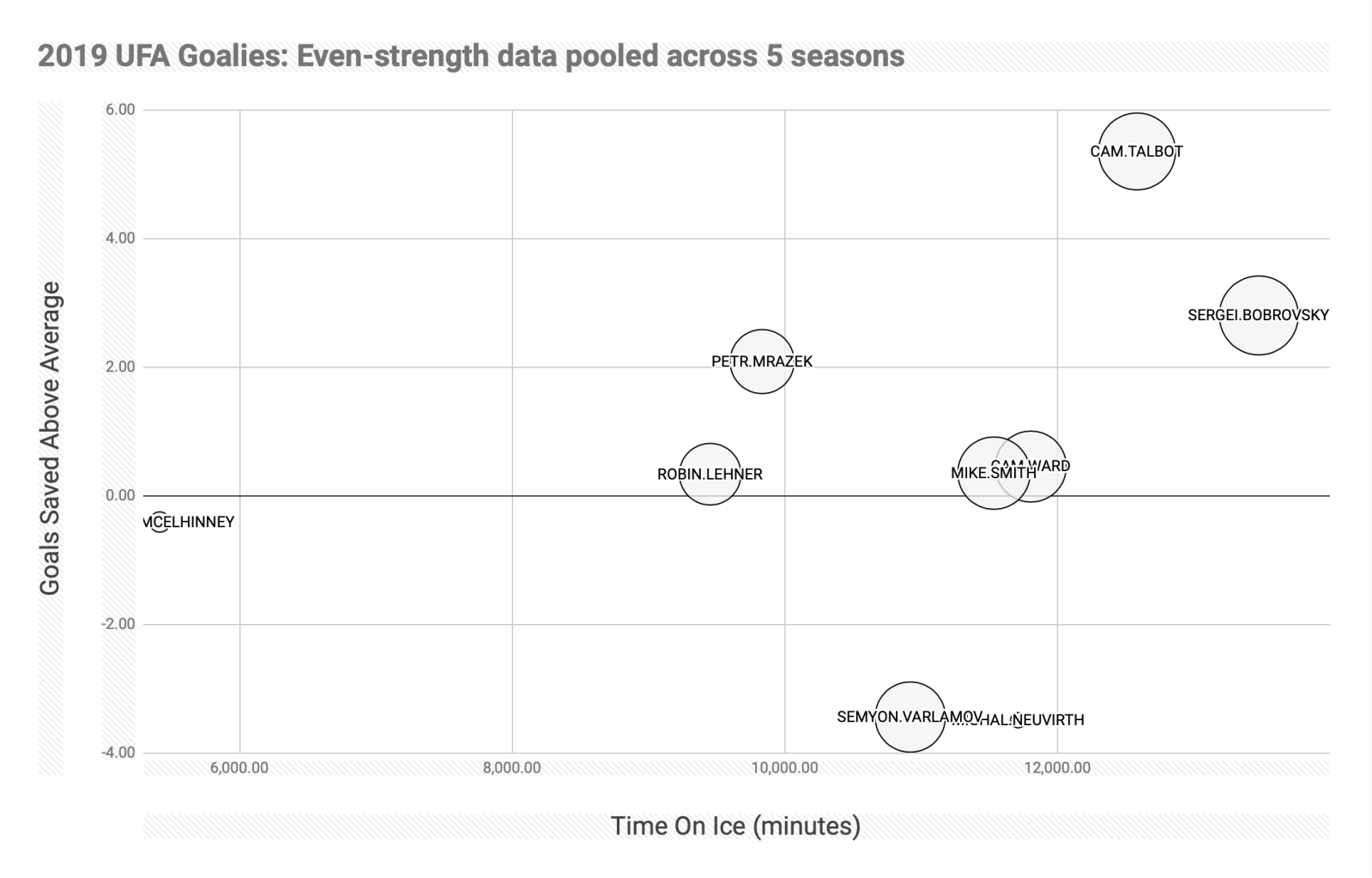 The above chart and table show even-strength time-on-ice (TOI - abscissa) and Goals Saved Above Average (GSAA - ordinate) pooled across the last five seasons for UFA's in consideration. Bubble size in the chart is determined by Games Played (GP). GSAA is chosen here as it allows for comparison across teams.

In terms of looking at past performance as a predictor for success the best candidates for the Oilers' net are Bobrovsky and Talbot. Talbot is a hidden gem. In over twelve thousand minutes of even strength hockey Cam Talbot has saved 5.35 more goals than an average NHL goaltender. It doesn't sound like much but when one considers regression to the mean it really is an incredible statistical achievement.

Another notable UFA by the numbers is Petr Mrazek. You can see why Talbot as a number one and Mrazek as a number two is possibly a desired combination. Their combined salaries are likely to equal the money that Bobrovsky is going to receive in free agency and the term required to get them to sign is much lower than the term that Bobrovsky will receive. It's surprising how poorly Varlamov shows in the above data, especially as he is likely to command premium July 1st. 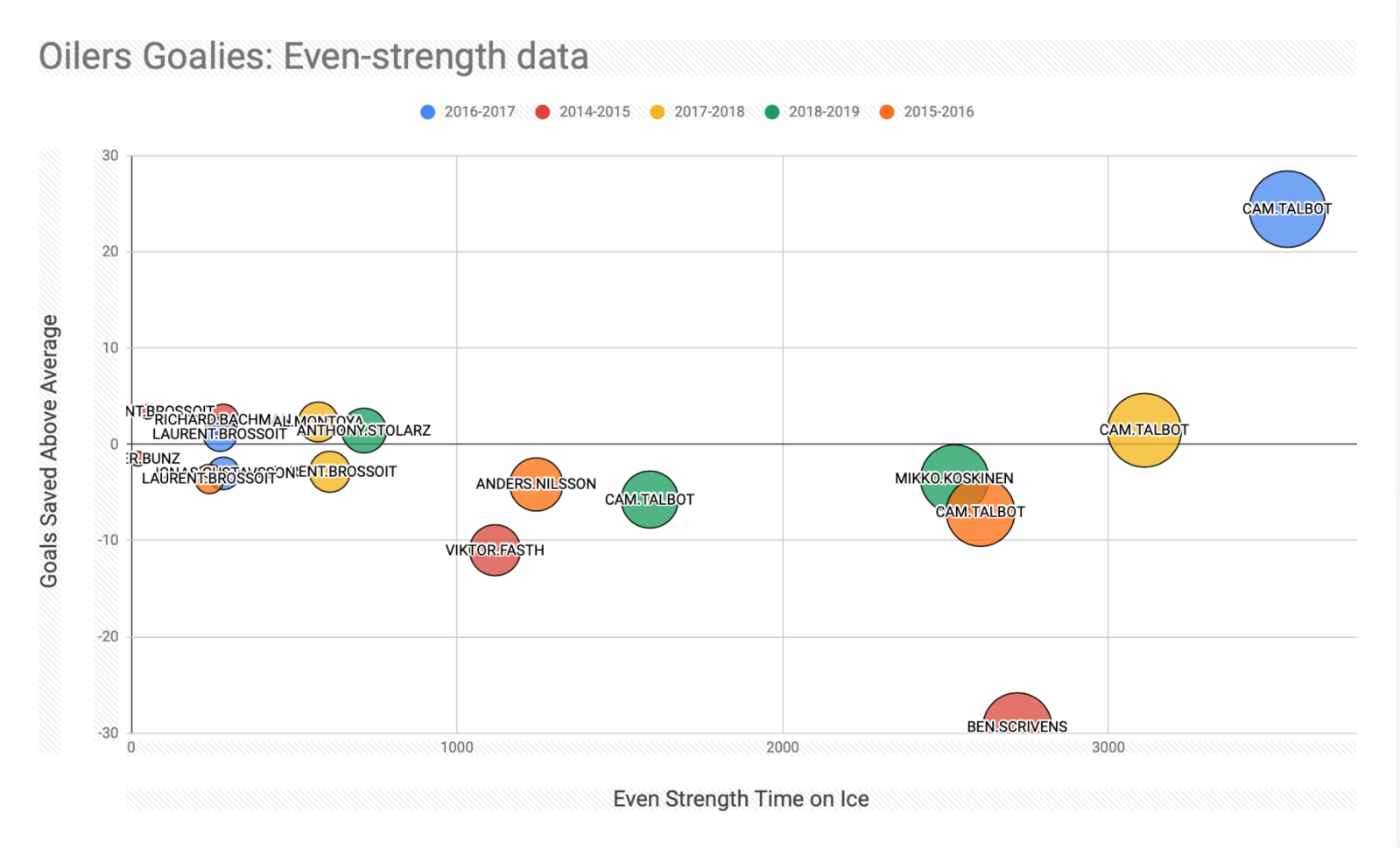 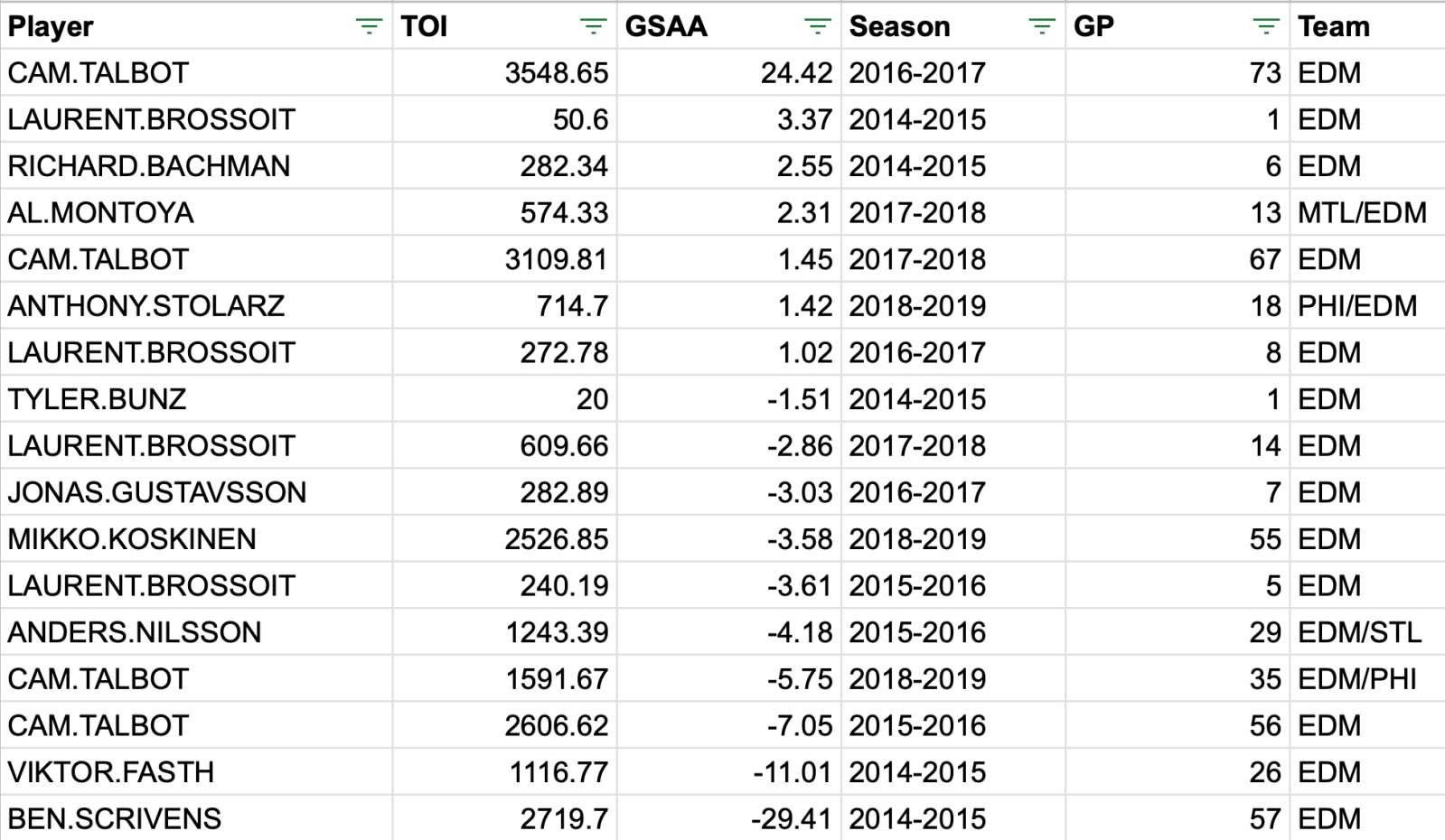 The above chart and table show even-strength TOI (abscissa) and GSAA (ordinate) for Oilers' goaltenders over the past five seasons. Bubble size in the chart is determined by Games Played (GP) while colour is determined by season.

One way to evaluate Mikko Koskinen's performance last season, would be to compare it to compare it to Talbot's first season with the Oilers in 2015-2016. Mikko's first season with the Oilers was better than Cam's. However, his performance was still under average. Does this mean that Mikko has the potential to out-perform Cam's playoff-making season? I don't see any evidence to indicate that this might be the case.

Betting on Talbot is low-risk (Synthesis)

Do Talbot's first and last seasons (which are under-average but not disastrously so) counter-indicate or somehow undo his performance in 2016-2017? No. It's safe to say that we have evidence that Cam Talbot is an above-average goaltender capable of playing above-average minutes with a below-average defence in front of him. It's also safe to say that he's capable of an outstanding season. Although there is some boom and bust to his play, the bust is not big as the hole left in the Alberta economy when WCS dips below six dollars a barrel.

Having watched pretty much every game that both Koskinen and Talbot have played with the Oilers I'd say that last season the team appeared to loose confidence with Talbot in net, particularly when he let in a very early goal (which seemed to happen a lot on home ice). However, in many of those early goals Talbot was not the only party to blame. Several Oilers seemed to struggle on home ice. Combined with the uncertainty caused by management's pursuit of Koskinen, Talbot's confidence was undermined. I believe new management and a new coach could allow Talbot to soar to his previous heights, especially if the Oilers could get 35 solid games from Mrazek.

There are no large problems with Koskinen's stats above. As I indicated above he did fairly well in his first season. Watching his game, I believe that he is extremely effective in taking away the bottom of the net. But he is not a fast mover and not a very good skater. I'm not confident that he is the best choice in game that requires more lateral movement and participation in play. If Mikko were signed as a back-up to Talbot, I would have no problem with that. But I object to the Chiarelli Shake that has been dumped all over us.

Make no mistake about it: our playoff appearance in 2017 was due to Cameron Talbot. He should be our starting goaltender and the coaching staff and team should be able to get behind him as they have in the past. If we let him go to Calgary, we can expect Dubnyk 2.0 except that this time it will actually involve the winning of the Vezina and perhaps a Stanley Cup and Conn Smythe trophy.

* Below is a chart and chart description by bituman from March 2015. 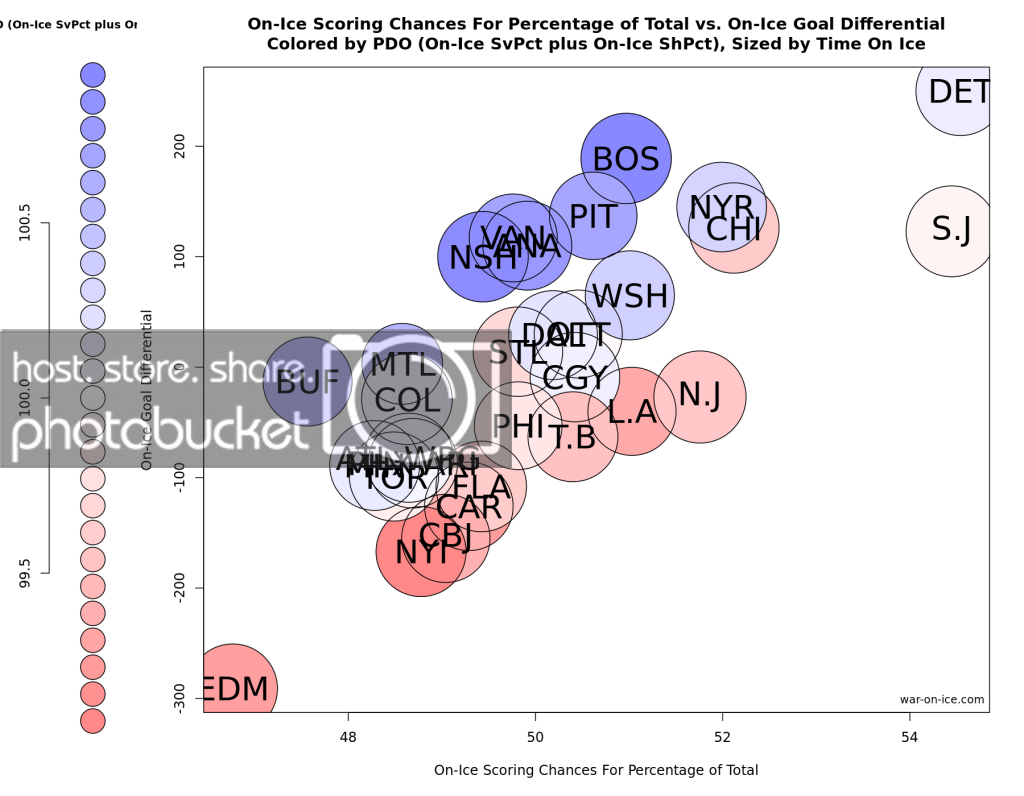 "This shows cumulative Scoring Chances For % vs Goals For % with PDO as bubble color since 2005-2006. Basically, this is the Oilers since the start of early published advanced stats. It includes the Pronger team. We don’t get chances, we don’t score, we give up chances, and we get low shooting & save percentage to boot.

This year we’re better than Buffalo & Phoenix. And many stats have us at about 25th for the moment. But after all of the draft picks, coaches, 3 GM’s and trades we’re still guaranteed to finish in the bottom three.

It’s completely astounding. We’re absolutely the worst team of the Corsi era, the worst team post lockout. Nine years of this garbage. It already equals in length Gretzky’s NHL career with the Oilers."