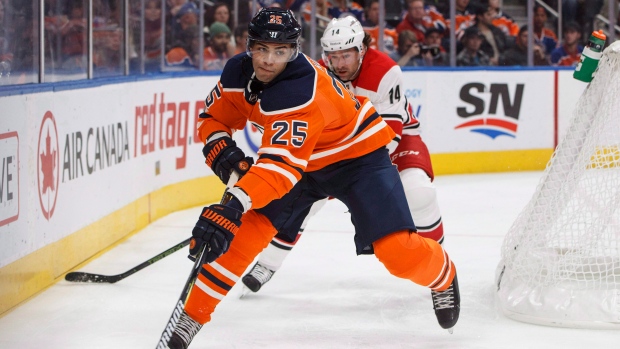 Much hoopla was made by analysts after the first 10 games of our season that our extremely low shooting percentage would eventually regress to something higher. After 26 games our even-strength shooting percentage was 6.93 and was lower than our end-of-season averages of the past decade. After 27 games and a 7-5 win over the Flames (I use "win" loosely) it popped-up to 7.51, good enough for 19th in the league. After game 31 and 6-2 and 7-2 road victories we were 16th in the league at 7.64% and scoring 2.55 even-strength goals per hour. After thursday's 4-0 loss to the Predators, where we pummelled Saros with 46 shots, our percentage has sunk a bit to 7.36.

Have we arrived? Is this the regressed average we've all been waiting for? Possibly - or very nearly. Somewhere in the sevens seems about right for this team. During 195 regular season games under McLellan the Oil have an averaged 7.74 percent (11th during this period).

PUMP UP THE VOLUME

I suppose we should not be surprised that under Todd McLellan we have become the "kings of Corsi" even though our brave coach is aware of who but not what Corsi is:

"Volume shooting, I don’t know what that does to Corsi or Fenwick because I don’t even know what those things are, but volume shooting is important. I think it breaks down defensive zone coverages, gets players out of position, taxes the opposition, makes them play more minutes in their zone." source

I take "volume shooting" to mean not just a healthy proportion of shots for/against but the rate of attempted shots per minute. His teams seem to place importance on not only out-shooting the opposition, but on out-shooting the opposition with temporally dense flurries. As of this writing the Oilers have pounded their opposition with a hailstorm of pills at 63.74 per hour, the second highest rate in the league. Under McLellan, the San Jose Sharks also led the league in shot volume during his time as coach. Cumulatively between 2008-2015 regular seasons they pounded their opposition with 58 attempted shots per hour. However, as a shot-volume team the Sharks only scored 2.27 goals per hour while registering a 7.51 shooting percentage, good enough for 26th place in the league.

There are a number of questions that we should ask regarding volume shooting. In fact, it is something that we should be able to define somewhat easily with statistical analysis. But before we do, before going through the somewhat lengthy process of defining "volume", let's take a look at where we are as of game 31, why our shooting percentage is bad and why our "possession metrics" are good.

Can we really shoot more and score less? Isn't that what our team has shown in the October and November? Let's review our 10-game rolling averages for the following: 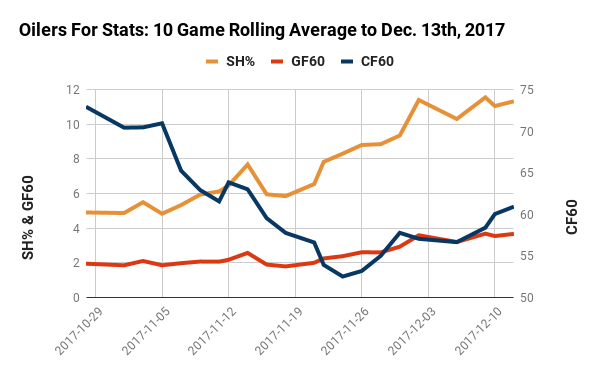 Can we really allow fewer attempted shots and allow more goals? As Curly would say, "Certainly!" Let's review our 10-game rolling averages for the following:

The chart below shows that our 5v5 goals-against have risen since the start of the season, as our save percentage has decreased. However, this increase in goal production has come with a wax and wane of shot volume. By this chart, goals against look downright out of phase with shots-against, particularly the rolling average between the 19th and the 26th of November. 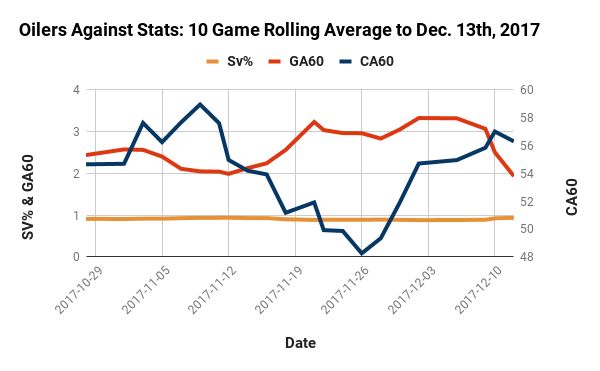 So generally speaking, our goals-for and goals-against seem more driven by our shot and save percentages than our shot rate. What happens when we look at both together?

The chart below indicates that the Oilers GF% follows their PDO, not their CF%. This agrees with my previous league-wide analyses that have shown PDO to be a better predictor of future goals (R2) than Corsi. 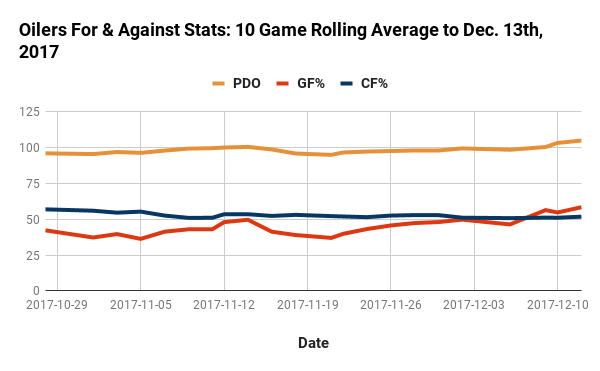 Maybe you are like me and are skeptical of the statistical validity of a rolling-average analysis? Maybe you think it's just eye candy? Fine. How about using Pearson Correlation Coefficient to see if the goals the Oilers are scoring and allowing are more strongly correlated with their shot-volume, or the quality of the shots they take and allow? 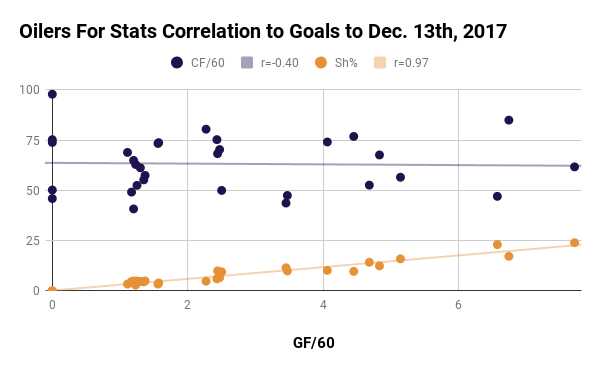 The Chart below plots CA60 and SV% against GA60 for the first 31 games of the Oilers' season. The correlation of Sv% to GA60 is -0.86, while the correlation of CA60 to GA60 is -0.40. When the Oilers have increased their Sv%, they have generally decreased their goals against. Decreasing their shots against has not really had an effect on the goal volume they have allowed. 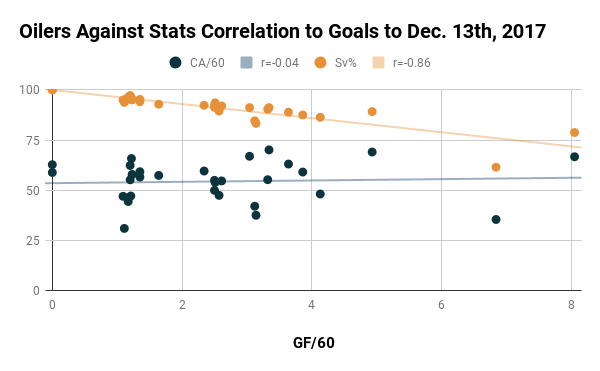 If we look at for and against data together, we see that the Oilers GF% is generally driven by shot and save percentage not Corsi, with a strong correlation of 0.77 for PDO. 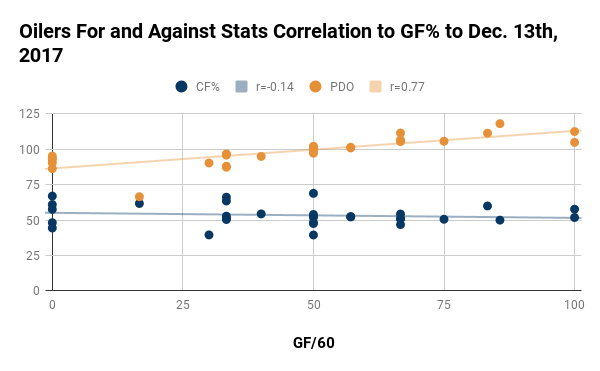 TURNING THE DEFENCE TO ELEVEN THIRTEEN

We greatly increased our defensive shot volume in the months of October and November. Many shots from defenders helped bolster our Corsi while decreasing our Sh%.

By November 28th the Oilers defence had contributed 41 percent of their teams attempted shots, while the league-wide average for defensive contribution is only 35 percent.

League-wide it's quite true that defenders have a much poorer shooting percentage than forwards. This season, using data to November 28th, forwards had a 5v5 iCSh% of 5, while defenders had an iCSH% of less than two. Box plots for this data is shown below.

It stands to reason that through "activating defence" and "shot volume" the Oilers decreased their shooting percentage and their goals-for percentage. By November 28th, our defenders were individually contributing more than 13 shots per hour of 5v5 time on ice on average, while the overall mean of NHL defenders is less than 10. This data is shown below in box plots.

WHAT I THINK THIS MEANS

So what? What's particularly interesting about all of the above data?

The above results agree with my previous analyses that show that save percentage and shooting percentage are better predictors of future goals than shot rates for and against. NHL hockey is first and foremost a game of quality, not quantity. Teams that have better quality of defensive play and better quality of offensive play are more successful. Quality shows in percentage data not rate data. I'm not convinced this would be the same at lower levels of play, for example in the CHL or post-secondary leagues. Ultimately, however, a team's success is due to both the quality of it's chances and the rate of said chances: both percentage and Corsi are important. It's just that percentage is more important.

I think the above shows that out of the gate (particularly in October and November) McLellan encouraged his defenders to shoot and activate and that in their youthful enthusiasm they actually slightly decreased our goal rate. Certainly there are other events that happened at the same time which affected our scoring: a sick Connor McDavid, a missing Andrej Sekera, etc. Interestingly, this activation also increased the number of attempted shots against the Oilers, but does not seem to have affected the rate of goals against.

I think this data shows that part of McLellan's tactic is to use shot volume to force the opposition to take penalties. As his teams have traditionally done very well on the power play this technique has worked. But the Oilers power play difficulties (which Freud might have called a death drive) have thrown a pretty big wrench into the works. McLellan's tactics have been team defence first, pummelling the opposition with shots, and winning through special teams. All of this is visible in the data. These tactics were not successful for the Oilers in the first 25 games of the season.

As a fan of McLellan what I am learning through the data is that he might not always know how to offensively activate his forwards. There are techniques for this, however, having a young defensive core pummel the opposition with shots is not one. Perhaps the coaching staff has self-corrected and this is why we saw a drop-off in shot volume during the month of November.

From a fanalytics point of view, I think the data above begs the question, "Is there an optimal shot volume?" Tentatively, I would say, "Yes, between 55 and 65 CF60 for the Edmonton Oilers." Shot rates above 65 seem to correlate with a poor quality of play and low GF60.

VIC'S FERRARI HAS NO GAS

Over the past few years I have posted several times on Copper and Blue about the statistical importance of percentage data including so-called PDO. My scientific approach to analytics has forced me to recognize percentage data as a better predictor for future success than shot rate data (including Corsi). But what is interesting is that it's not at all clear what these numbers mean: their interpretation is essentially subjective.

I have no secrets here. I am using basic stats. I am aware of more complex models of shot quality such as expected goals or scoring chances, however, I am ignoring them at present for a few reasons.

One reason is that the "analytics community" (whatever that is) apparently prides itself on objectivity and spreadsheet analysis over narrative. But over the past ten years or so there has been a relentless barrage of narrative stemming from Vic Ferrari's notion that there is no shot quality and further to this PDO's notion that variance percentages is due to luck. Neither are true... at all... except in the very short term. The game of hockey is more about the quality of shots and is more percentage-driven than ever. And worse than this, the variance in PDO is actually a better predictor of future goals than Corsi.

You can't make this stuff up. Truth is better than fiction. The old way of thinking (that of chasing percentages, 90's thinking if you will) has more objective substance than the "new fancy stats". There is more objectivity in the subjectivity of the GM's who coughed-up massive contracts to star goaltenders than the Darryl Sutters who asked the Anze Kopitars of the world to start playing defensively at the opponent's goal line.

But what if the fiction, the Corsi narrative that is bullish on rate data, is not only fallacious but damaging? Well, I think it is. And the evidence above with our fair Oilers indicates that this is the case: high-volume Corsi when it crosses a certain threshold (approximately 65 CF60) can actually be damaging to scoring - specifically when the shot volume is driven by activated defence.