The Professor has to go

I like Ben Scrivens. I’m a fan of Ben Scrivens. I like his nickname, the Professor. It makes me think of a gentler time when Ginger and Gilligan filled the airwaves. When the Professor turned-away the most shots faced by a goaltender in a shut-out game in January 2014 I was elated. The game was both awesome and discouraging with Scrivens showing his potential to be an NHL starter and the Oilers showing their lack of potential at defence. It was a highlight of the Eakins' era right behind Smyth’s record and retirement.

There have been claims lately that the Oilers' terrible defence is responsible for Scrivens' demise. On the surface these claims seem justified. In April Jonathan Willis wrote:

However Dubnyk’s struggles in 2013-14, preceded as they were by multiple strong seasons in Edmonton and followed by this year’s tour de force with Minnesota, show that even a good goalie can collapse behind the Oilers’ defence.

Scrivens’ work elsewhere suggests that he is a good goalie. He’s under contract for another year. There’s no good rationale for the Oilers to buy him out or try to trade him at a disadvantage when they can simply retain him as one half of a tandem and stand a very reasonable chance of him returning to form.

Scrivens as back-up? Maybe. Scrivens as part of a tandem? No thanks. The reason to buy-out or trade Scrivens, or in the very least limit his play? He failed, and he failed where other goalies have succeeded. Scrivens is not yet a starting goaltender in the NHL. This was obvious by November of last season. Instead of admitting that his gamble of not securing an established starter was back-firing, Craig MacTavish decided to scape-goat Frederic Chabot who is largely responsible for Dubnyk's success. The Professor should be traded or waived, or perhaps played no more than thirty games as a backup (an expensive backup). Maybe someday Ben will get another shot at being a starting goaltender but that chance should not be with the Oilers. In my mind this is different than the Dubnyk situation where he had a record of success before a season of failure.

Below we see the drastic nose-dive in Scrivens' save percentage as a starting goaltender. His hextallies are decent in the medium danger-zone area indicating that Scrivens is good at stopping players on the rush but below-average in the crease, and poor at tracking shots from low-danger areas. Perhaps Frederic Chabot could help him with puck tracking (oh, shoot!). 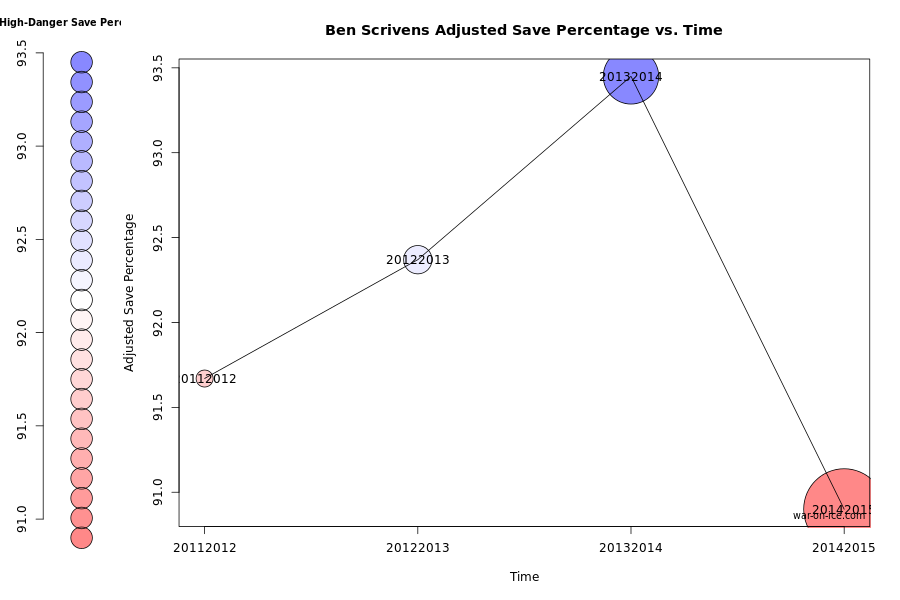 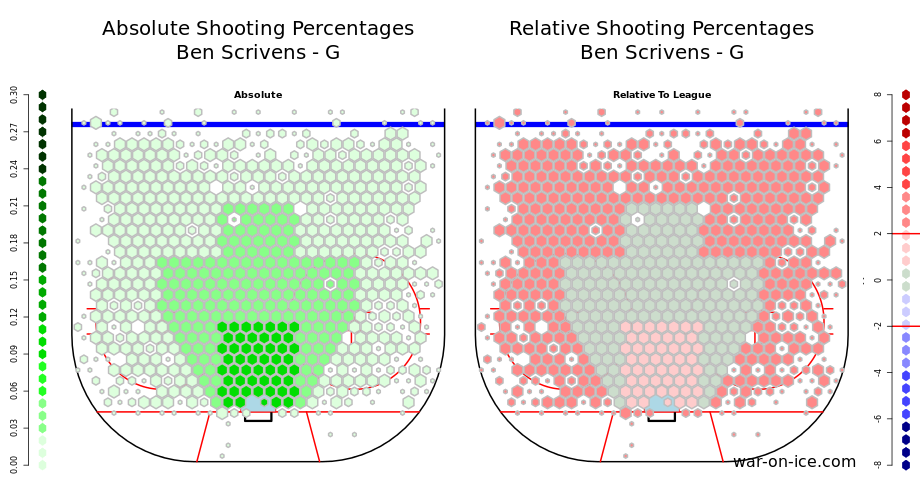 The premise for replacement

To date on Copper and Blue chappy35 has examined a couple of the unrestricted free agents (UFAs) out there including Michael Neuvirth and Antti Niemi. Other writers have also been putting pen to paper and doing their homework, helping to write the last chapter in the Professor's dissertation with the Oilers. Woodguy wrote an extensive evaluation of the top UFA’s and many of the other usual suspects have voiced their views including Jonathan Willis and David Staples. What could I (of lowly fanpost status) possibly add to the conversation at this point? Perhaps not much. But alas, like the teetering petrochemical industry, bituman will try.

Instead of searching for the best goaltenders available I wanted to do something different. I decided to look for goalies that were familiar with the high flood-waters of poor defence. I started-out by determining the worst defensive teams over the past four years. I chose war-on-ice’s high-danger scoring chances against per 60 minutes metric. The idea behind this metric is one that I’ve explored before. High danger scoring chances give the nod to shot quality and I suppose I'm a bit of a fan of quality. 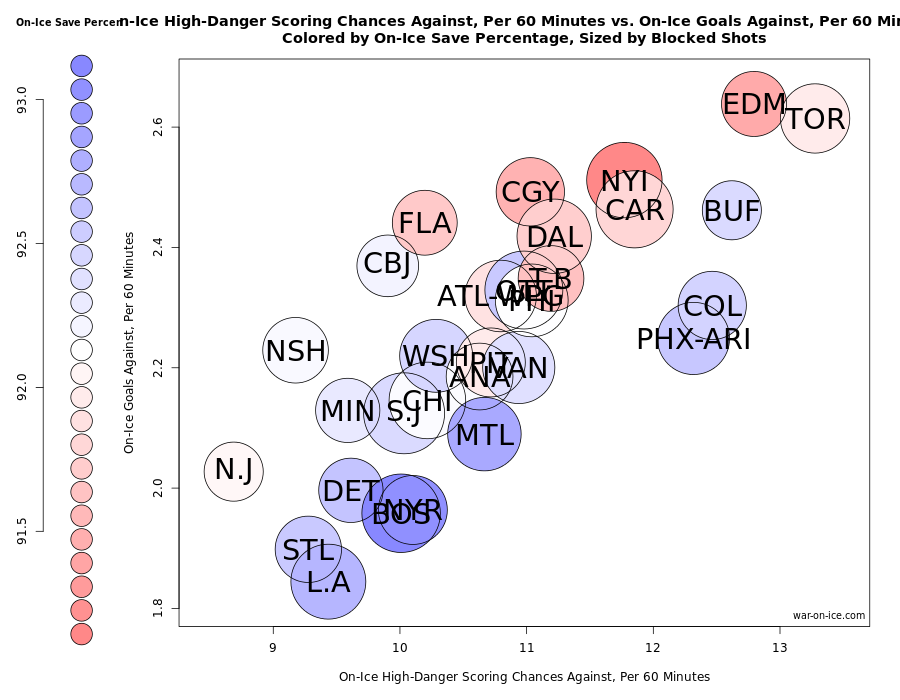 The above shows even strength high-danger scoring chances per 60 minutes vs on-ice save percentage cumulatively since 2011. Bubble colour indicates save percentage while bubble size corresponds to number of blocked shots. The worst defensive teams in the league have surrendered approximately 12 or more high-quality chances per game: the New York Islanders, Carolina Hurricanes, Arizona Coyotes, Colorado Avalanche, Buffalo Sabres, Toronto Maple Leafs, and the Edmonton Oilers. Of those seven teams, Arizona, Colorado, Buffalo, and Toronto have received better goaltending than Edmonton (they have bluish bubbles). It’s notable that the worst of the teams defensively is Toronto, which has given-up more high-quality chances per hour than any other team cumulatively since 2011; if not for their goalies the Leafs' destiny may have been very different.

Below are the goaltenders corresponding to our terrible defensive teams filtered for time on ice and other variables. We see that several goalies have fared much better than our protagonist under similar and worse conditions. The table below is sorted in order of High-danger save percentage (Sv%H). 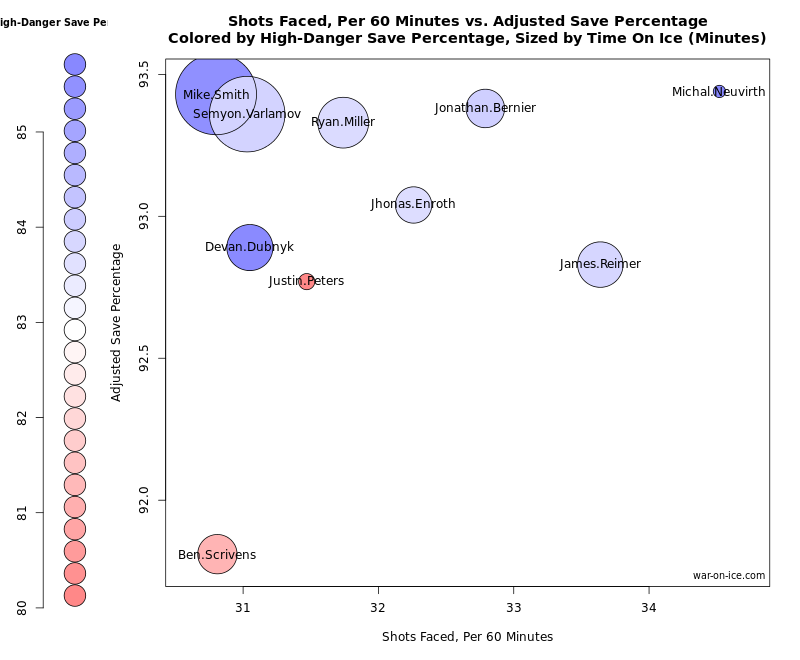 I don't have a whole lot to say about Neuvirth that hasn't already been said by C&B resident expert chappy35. His numbers are impressive but he only has one year of experience as a starter. Neuvirth's really good at stopping shots from the high-danger zone. The Oilers probably need that. 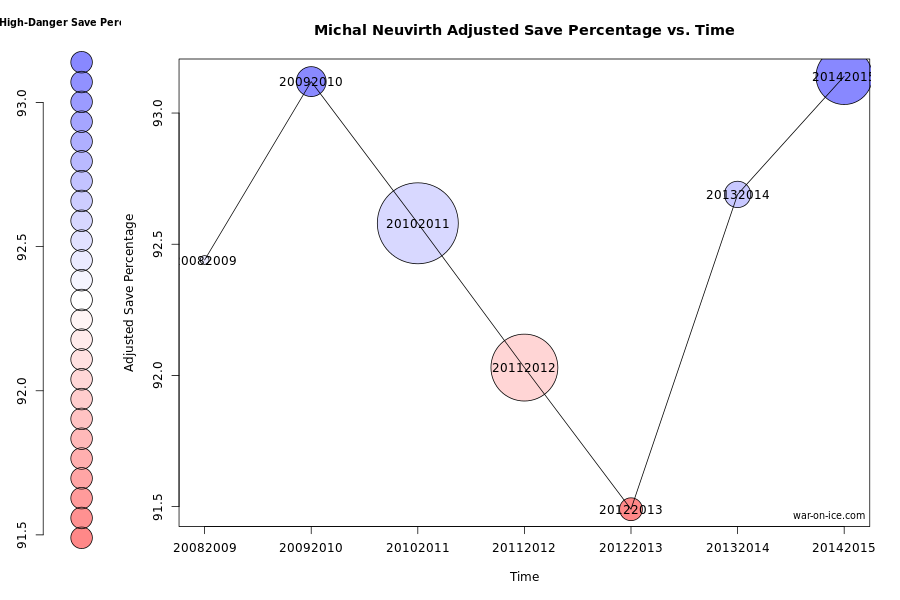 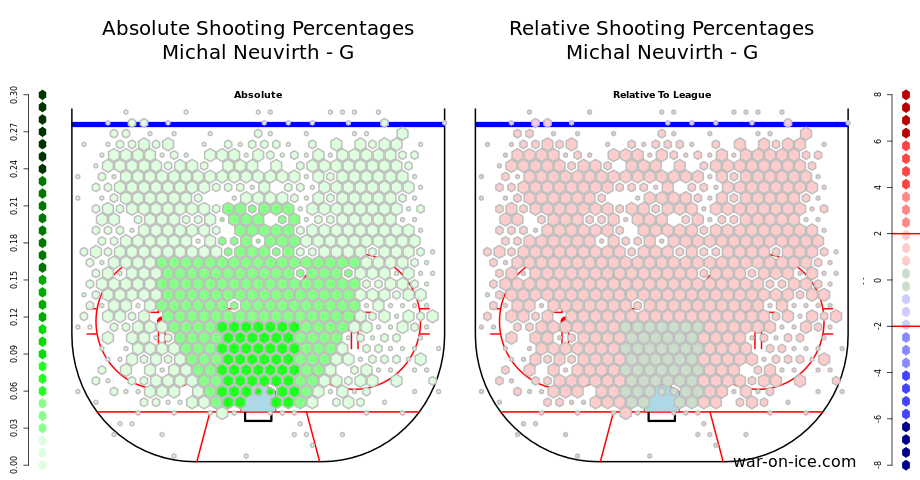 Dubnyk's not going to sign with Edmonton. I wish he would. But he's not. He's included here for the sake of completeness and because I like Dubnyk. 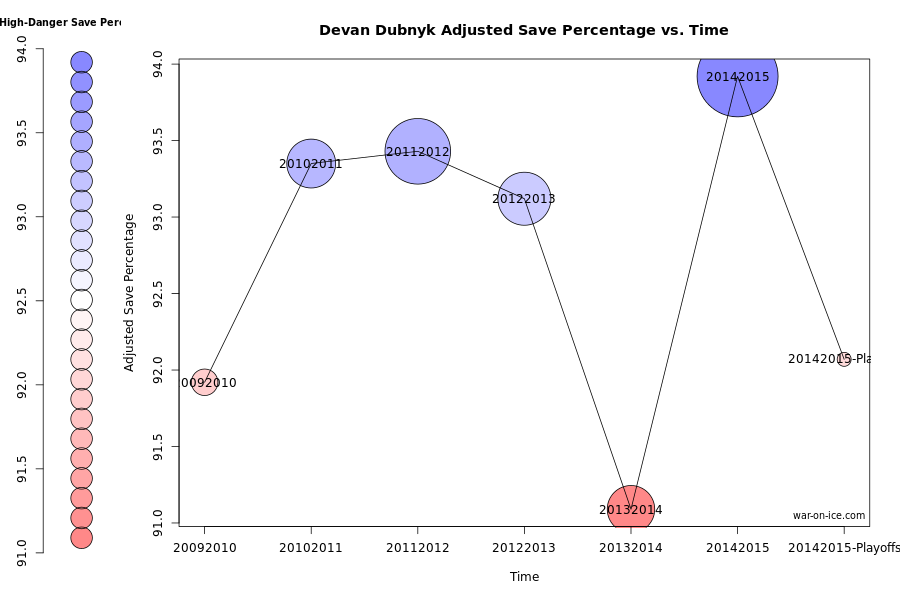 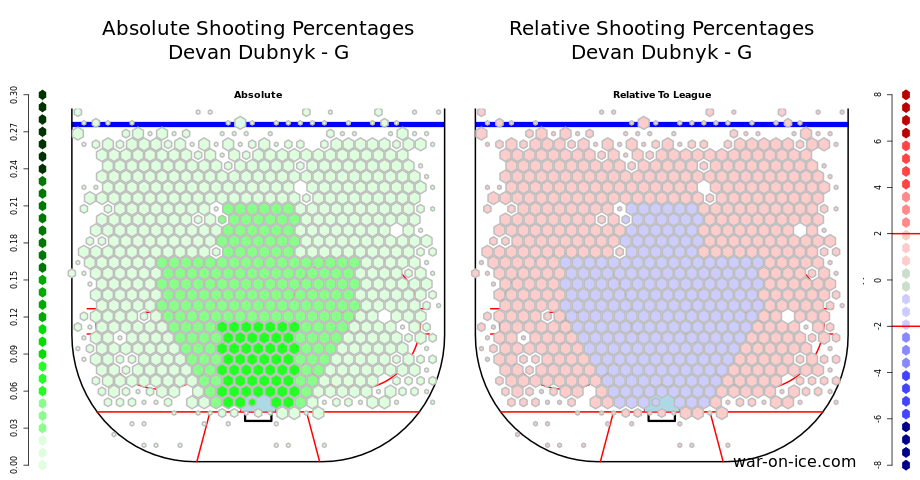 Smith has faced a work-load approximately as heavy as Scrivens' for more than twice as long and has generally performed very well. In low and high-danger zones he's been above average, which on a bad team is an accomplishment. In the middle danger zone Smith has been slightly below average indicating that he may have surrendered many goals on the rush. The length of Smith's contract makes in unlikely that he will be going anywhere soon but one has to wonder if his recent IIHF gold medal experience, fresh in the mind Todd McLellan, might bring him to Edmonton at some point. Contract aside, I would support Smith coming to Edmonton and breathing new life into his save percentage. 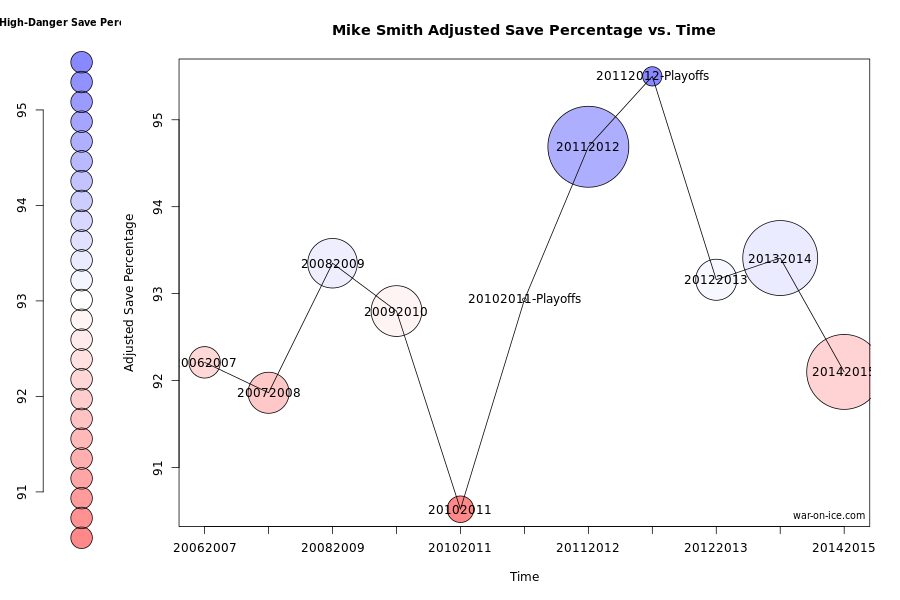 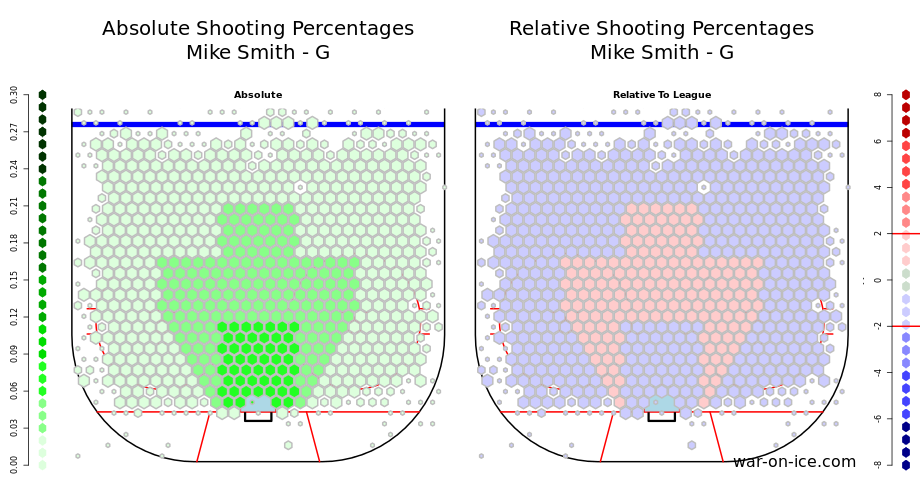 Jonathan Bernier is a good goalie. If adjusted save percentage means anything he's as good as Varlamov, Smith and Miller. Bernier has been as successful as these goalies on a defence that measures worse than the Edmonton Oilers (I didn't know that was possible). According to Jim Matheson Bernier has been on the Oilers' radar before, perhaps Peter Chiarelli can help make MacTavish's dream a reality. Instead of Bernier the Oilers ended-up with Scrivens (who was traded to LA from Toronto for none other than Jonathan Bernier). Is Bernier better than Scrivens? Yes. Is Bernier worth trading for? Yes. Might Toronto trade Bernier? Maybe. Elliote Friedman reports that Bernier had a rough year. The Pension Plan Puppets figure Bernier is worth around $5.5M for 3 to 5 years. If 2014-2015 was a rough year for Bernier, the Oilers should jump at the chance to sign him because honestly his worst is better than Scrivens' best. Offer sheet Bernier? Hell yes! Is he worth a 5 year $5.5M contract and a first, second and third round pick? Yes to the contract, no to the picks? Maybe it's better to look at a trade in this situation. 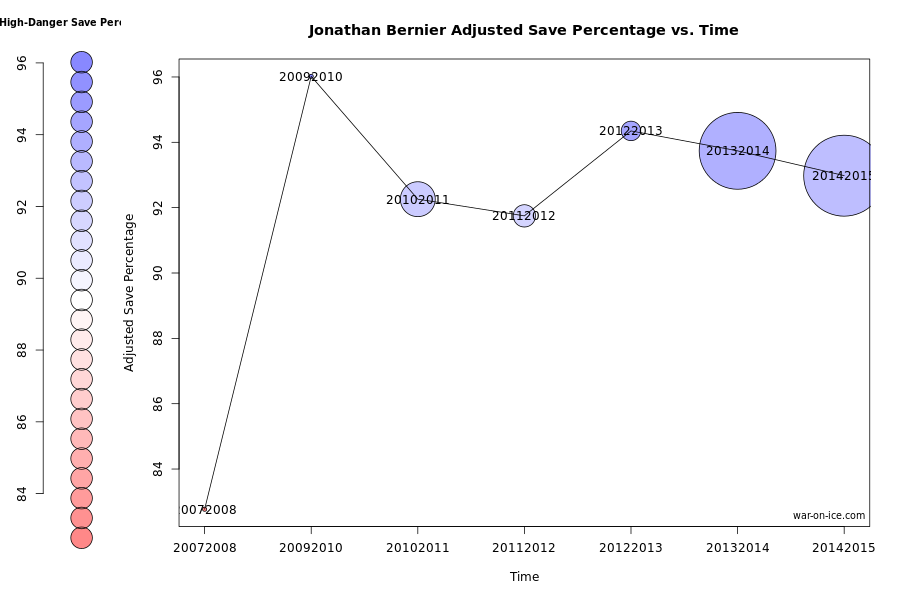 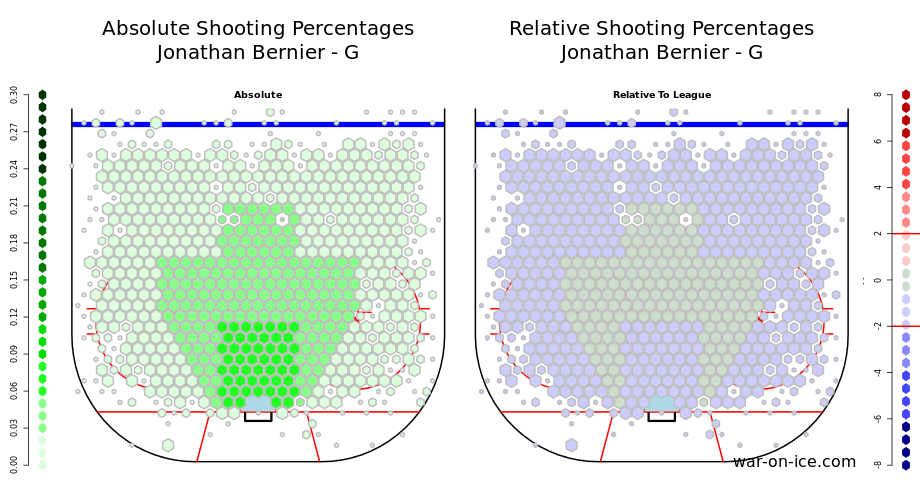 Varlamov is another goalie with a big contract who probably isn't going anywhere. Varlamov should have won the Vezina in 2013-2014. It should be no surprise that Varlamov is as good as he is. Unless, of course Patrick Roy and Francois Allaire could possibly be wrong when it comes to goaltending. Traded as a restricted free agent by Washington for a first round pick in 2012 (Filip Forsberg) and a second round pick, did Colorado know something others didn't? 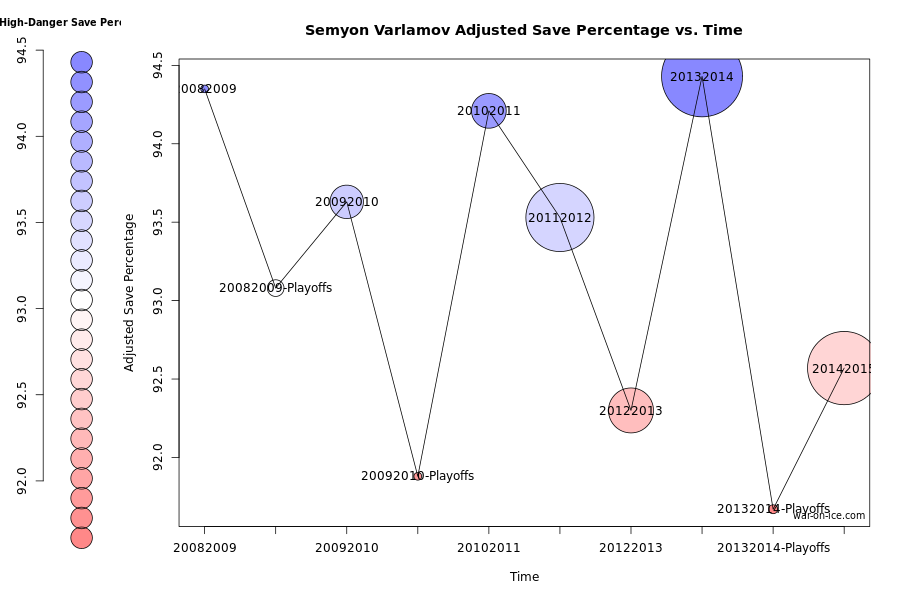 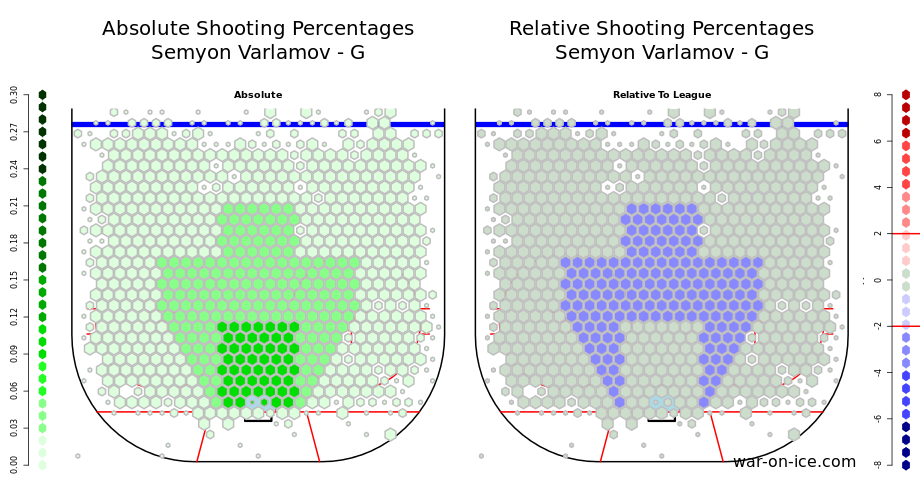 James Reimer is the Devan Dubnyk of the Maple Leafs, except he might just be better. At least, that's what the bubbles are saying (thanks again war-on-ice!). Reimer is another goalie that seems to struggle a bit with the medium-danger shots. His low-distance and crease play are very good. Should the Oilers trade for Reimer? Yes, if the idea is to try him for a year to see how he fits, without giving away major assets. 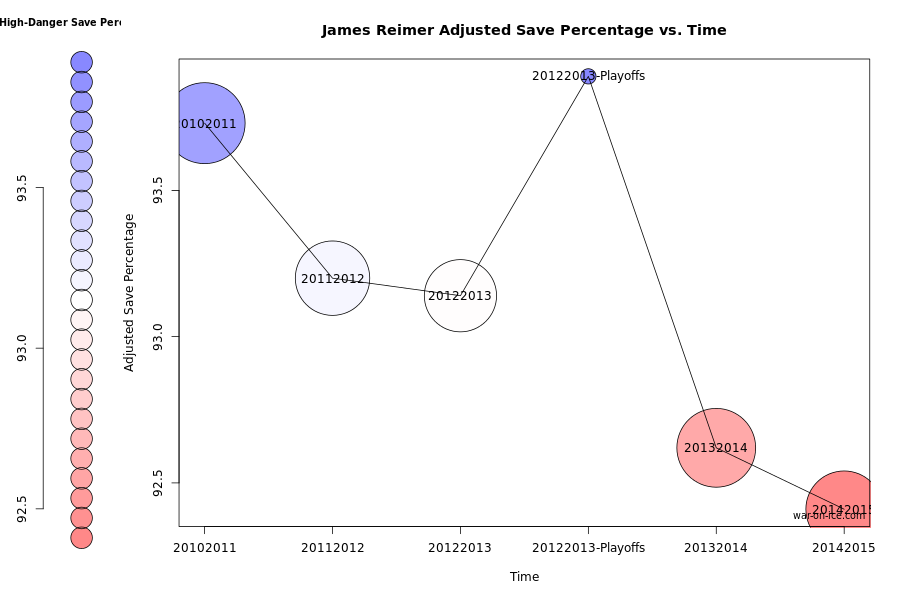 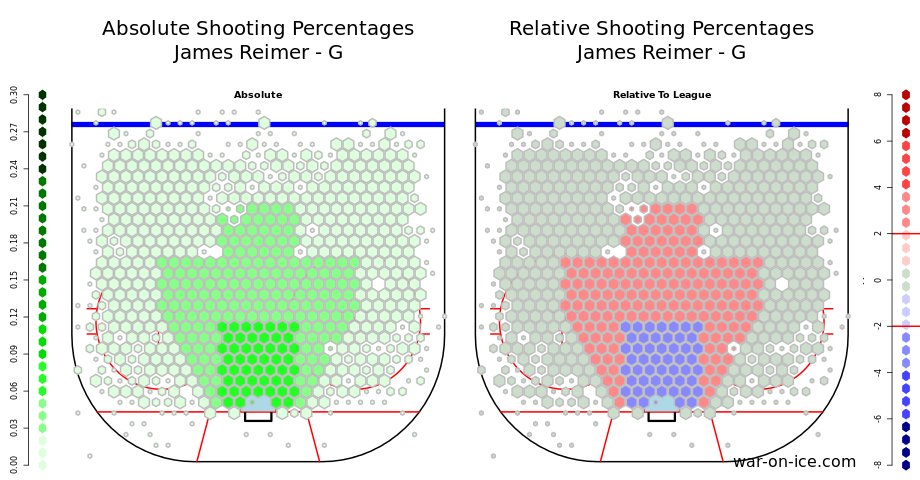 Ryan Miller is a highly-distinguished veteran approaching the end of his career. He might still be an improvement over Scrivens. Over the past four years on a team that is as bad as Edmonton, Miller has been perfectly average. His game seven play against the Flames was not spectacular, which leads one to wonder if he's showing his age. I would like Miller in a tandem situation, perhaps with a goalie like Enroth. But the price tag seems too high for that kind of arrangement. 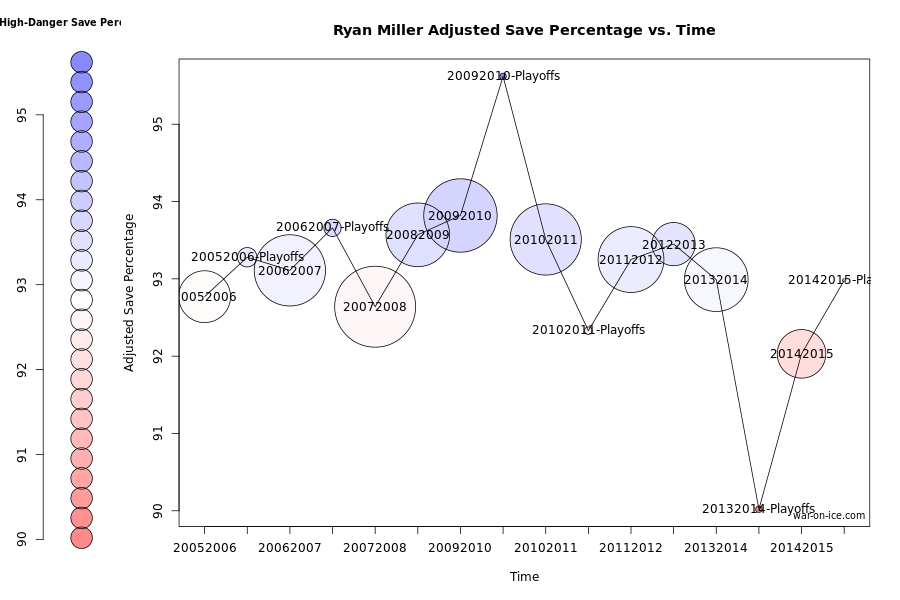 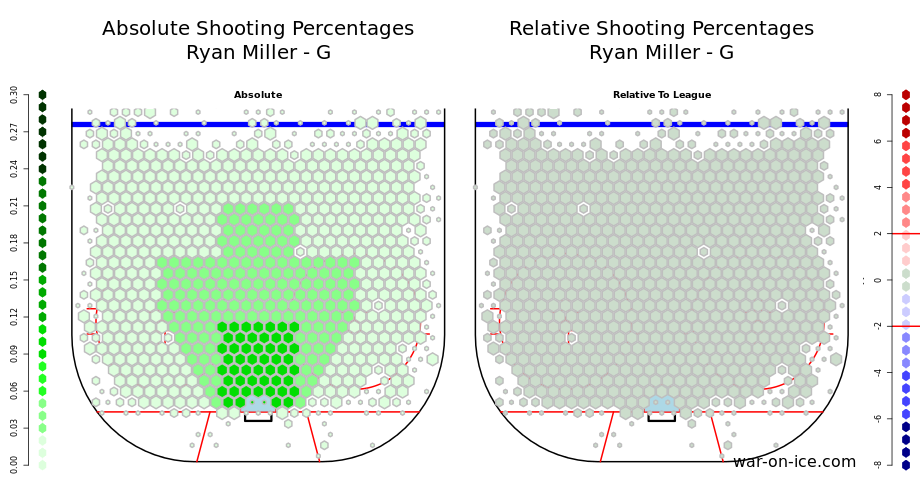 If the Oilers manage to acquire Enroth as a free agent I will be very happy. Over a very similar period of time-on-ice and on a smiliar team Enroth has outperformed Scrivens by a bunch. But he's never been relied on to be a starter. Should Edmonton take the chance? Maybe as part of a tandem he'd be great. 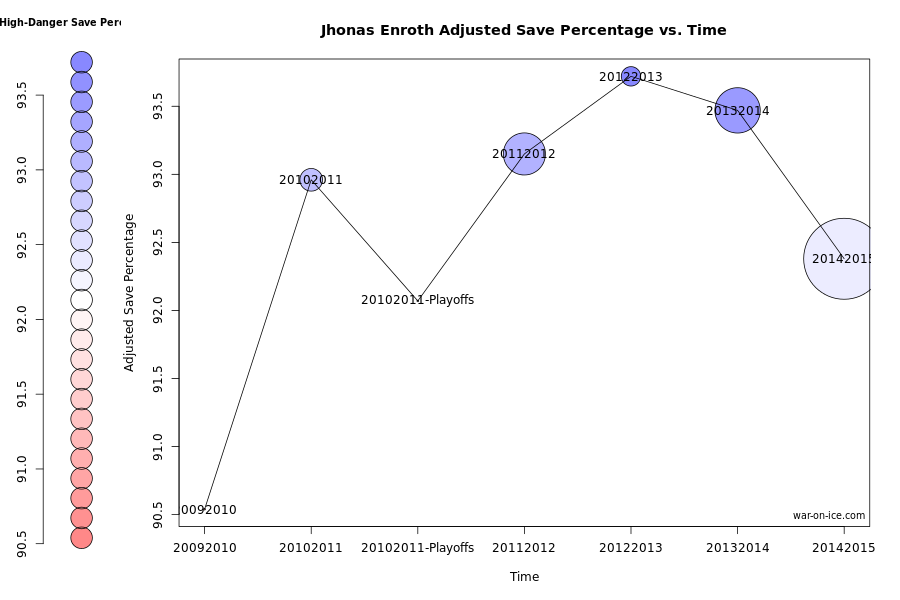 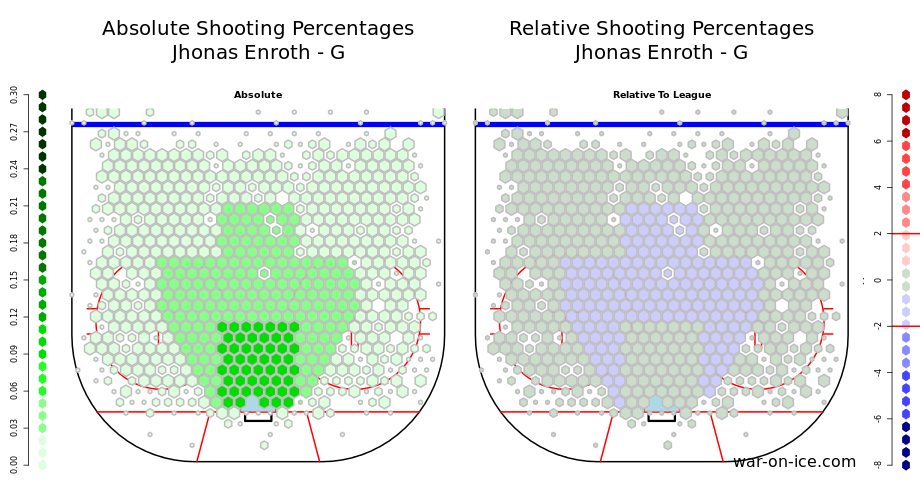 Justin Peters is a goaltender I didn't expect to emerge from this analysis. Over 47 games with Carolina Peters put-up numbers slightly better than Scrivens', although his high-danger save percentage was worse than Scrivens'. 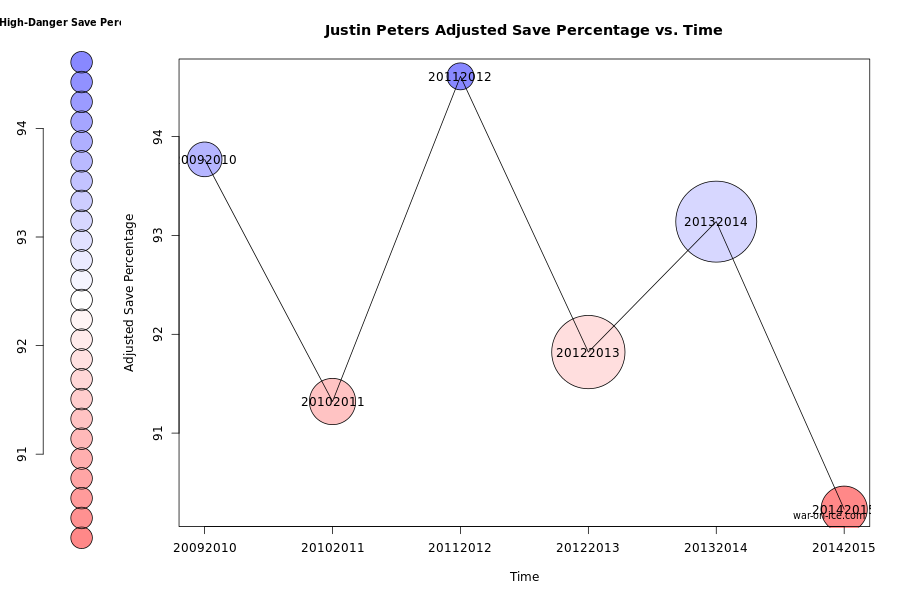 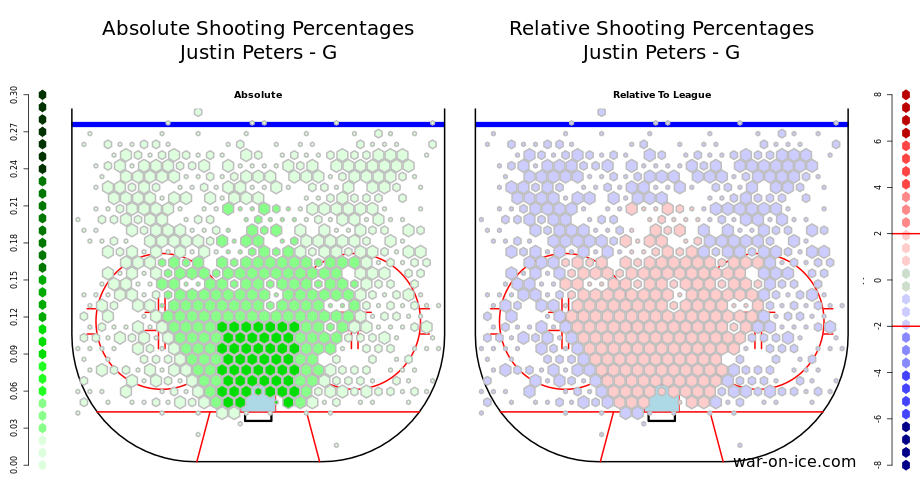 Jonas Enroth is a UFA acquisition that can be had a a good price. He's proven that he can be a solid backup or tandem goalie when facing high shot volume. He also has a decent high-danger save percentage. Enroth and Neuvirth as a pair might work well, both played for Buffalo last season. If the Oilers are shopping for a solid back-up or are looking to build a tandem, Enroth is a great choice.

Jonathan Bernier or James Reimer might be available. Bernier is worth trading significant assets for. If Toronto is looking to move him this is a good chance for the Oilers to move-in. Bernier might be better than Dubnyk or any goalie we've seen in a long time. I like Reimer in a trade for minor assets. He's going to be UFA and it's not worth sacrificing important players for a goalie that might move-on in a year's time.

A big trade for Mike Smith is something I fear. McLellan might want to try to pressure the club to acquire Smith given their recent gold medal together. With all of our talent up-front I can see Arizona jumping at the chance. I don't believe that trading a significant asset for Smith would be worth it at this time.