Earlier this week I posted a chart in the comments section of a piece by Derek, which I put together using war-on-ice's amazing chart tool. According to C&B regular GCW_69 the chart became a hit on Twitter. Given the popularity of this "new way to smell old stink" I thought it might be fun to present a few variants of the chart and discuss them. After all, masochism is the plat du jour so below please enjoy 50 Shades of Goilers! 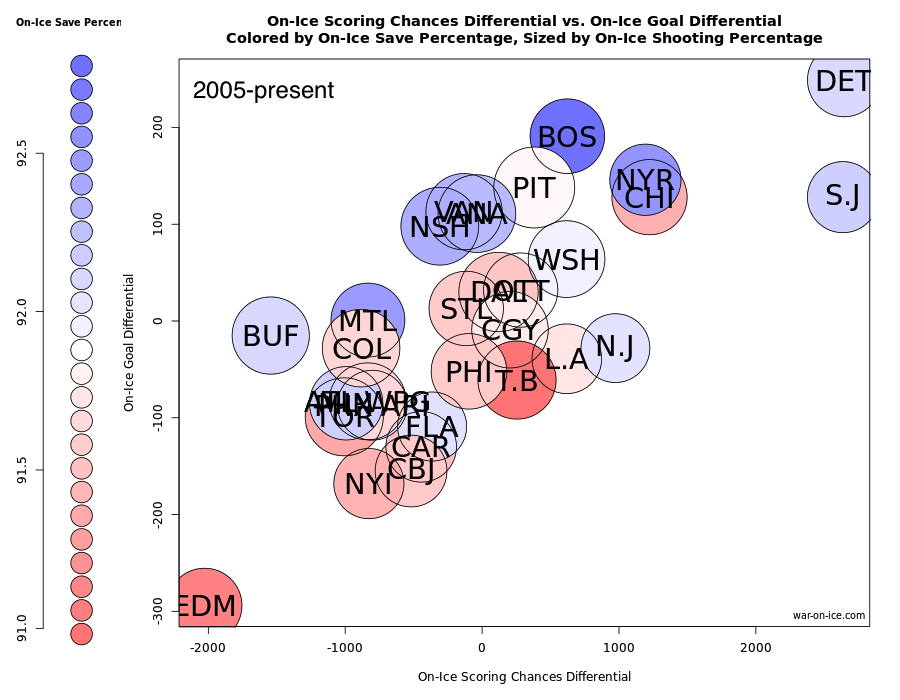 Above are the cumulative results since 2005-2006. Basically, this is the Oilers since the start of published advanced stats. We don’t get chances, we don’t score, we give up chances, and we get low save percentage to boot. It’s completely astounding. We’re absolutely the worst team of the Corsi era, the worst team post lockout. During this time we've had a luck run to the cup, three General Managers, six head coaches, three number one picks, and countless trades and acquisitions. Below are corresponding charts for each season, under each coach, and under each GM. 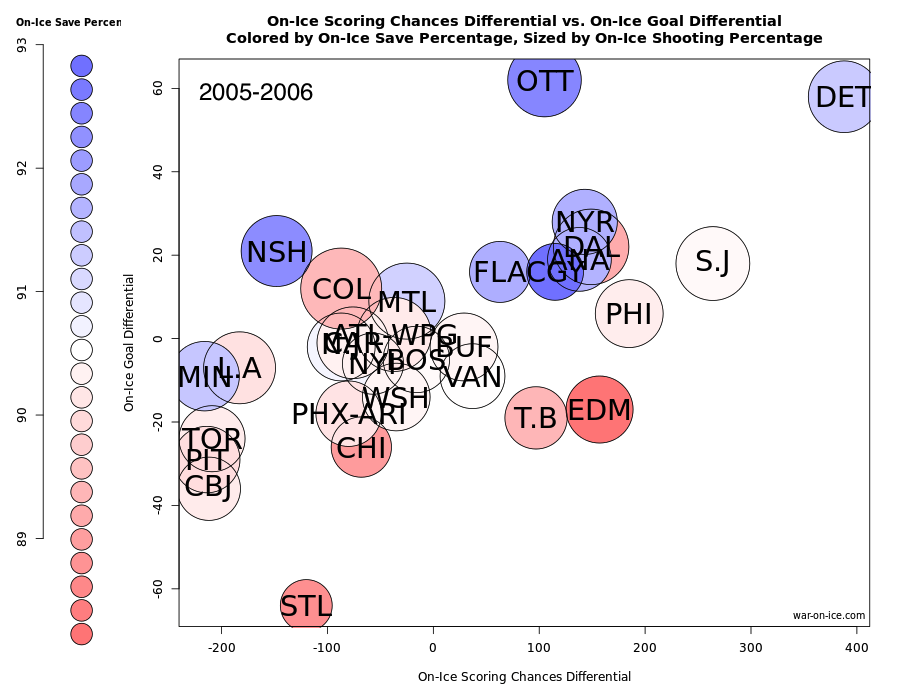 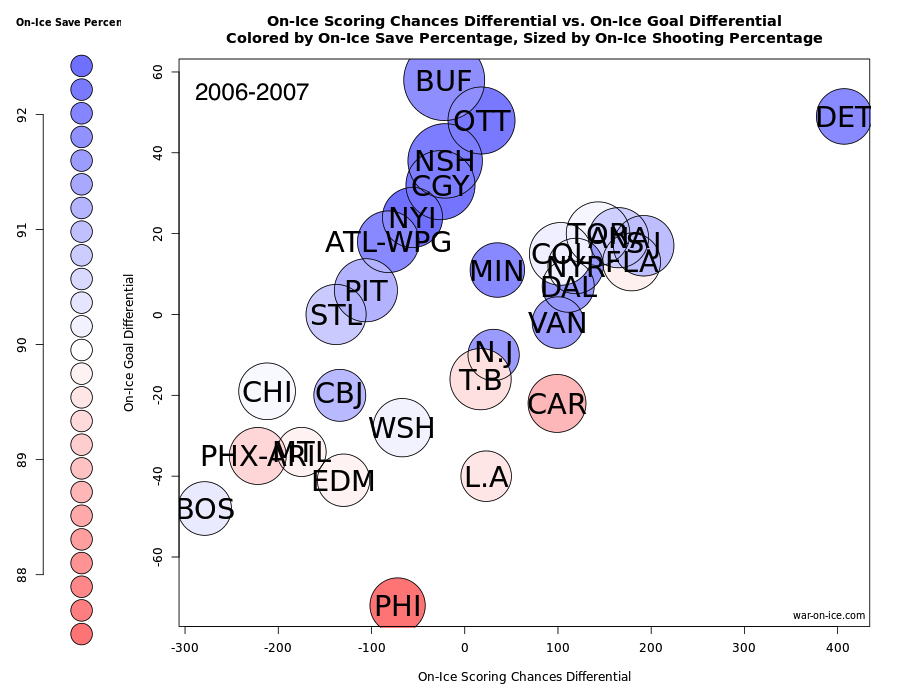 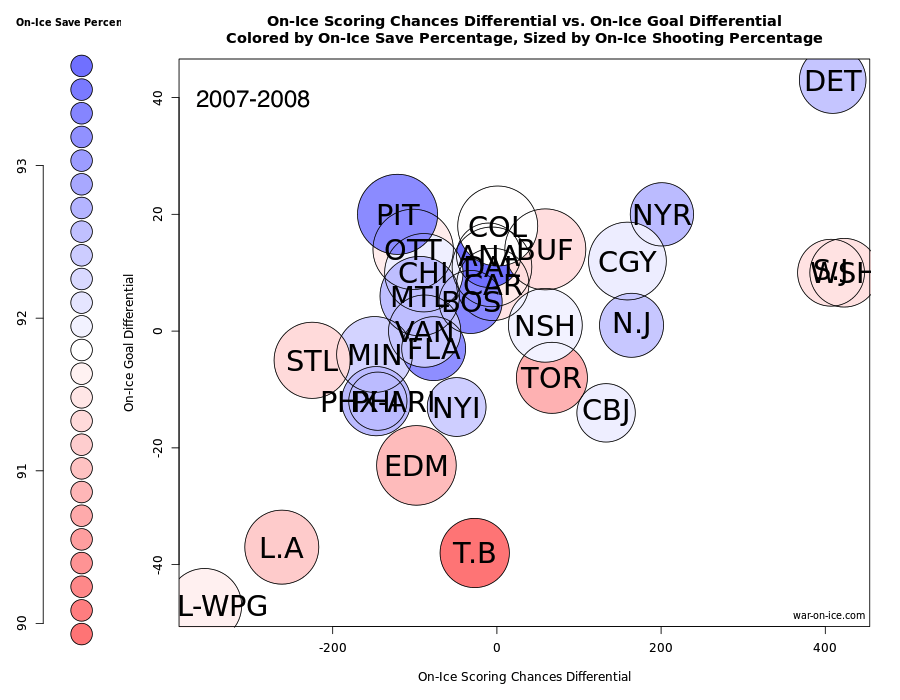 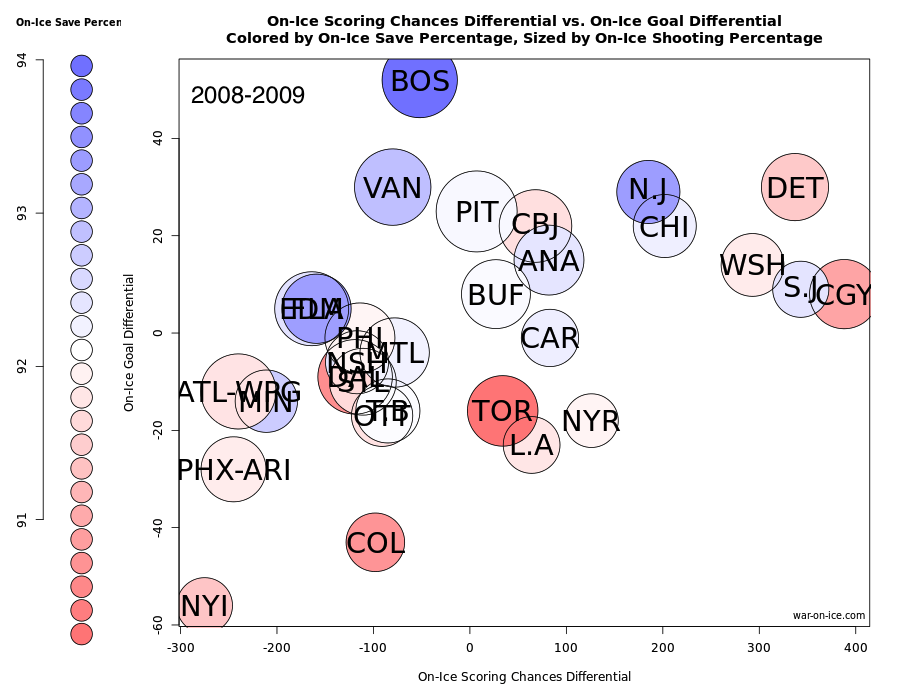 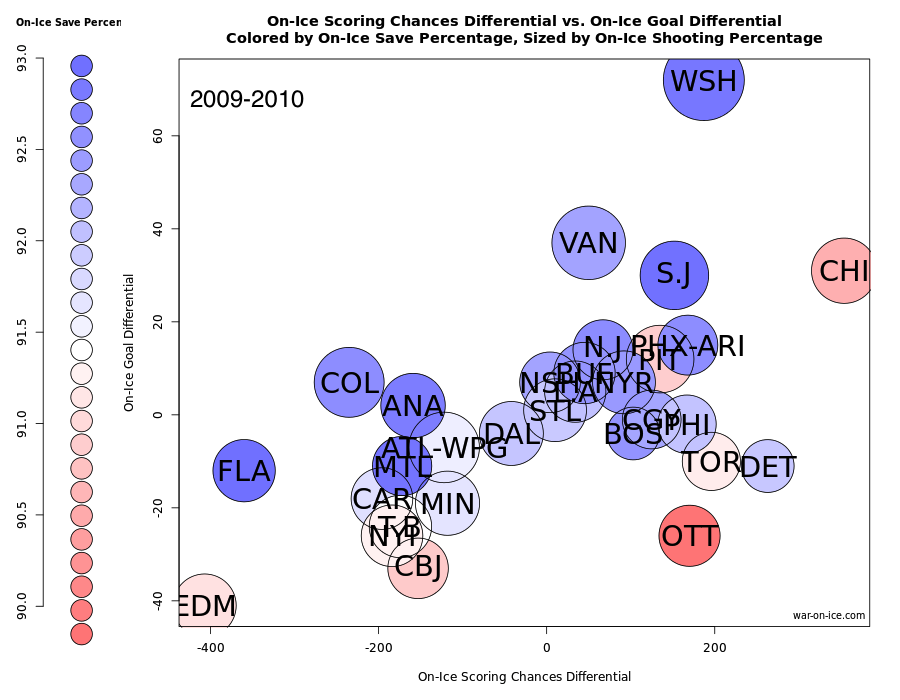 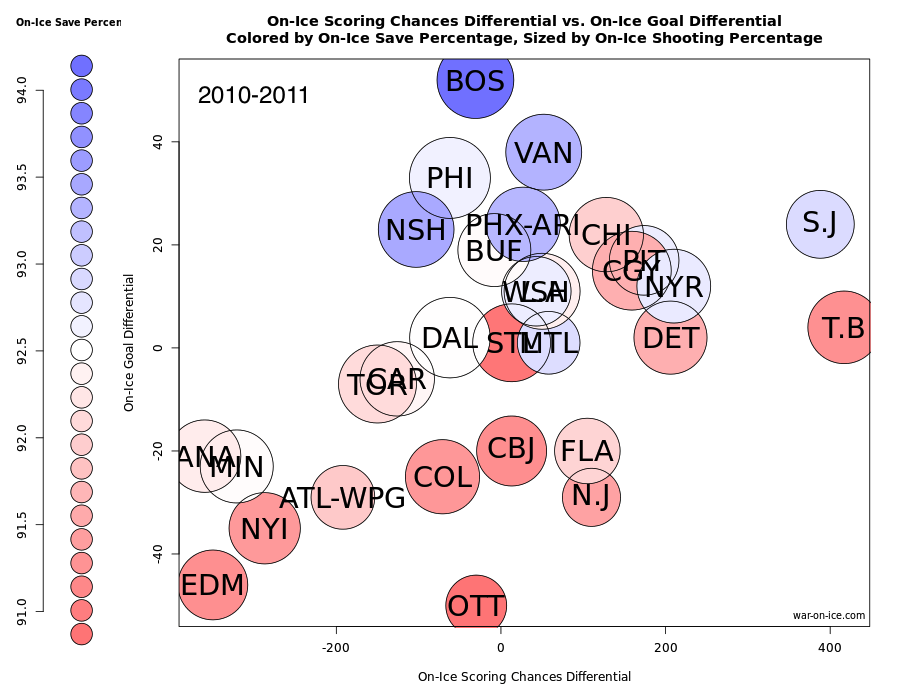 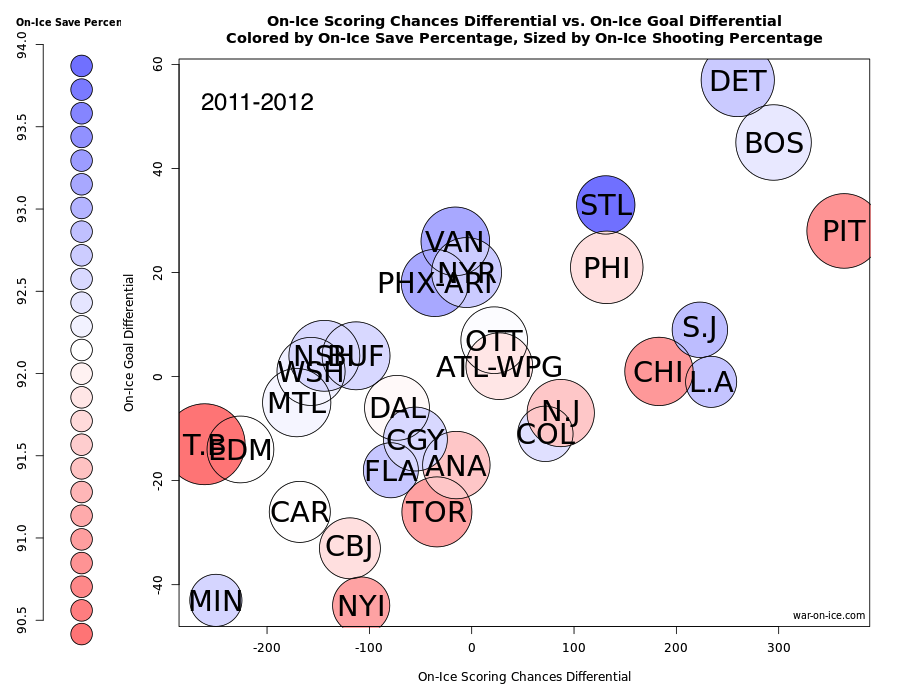 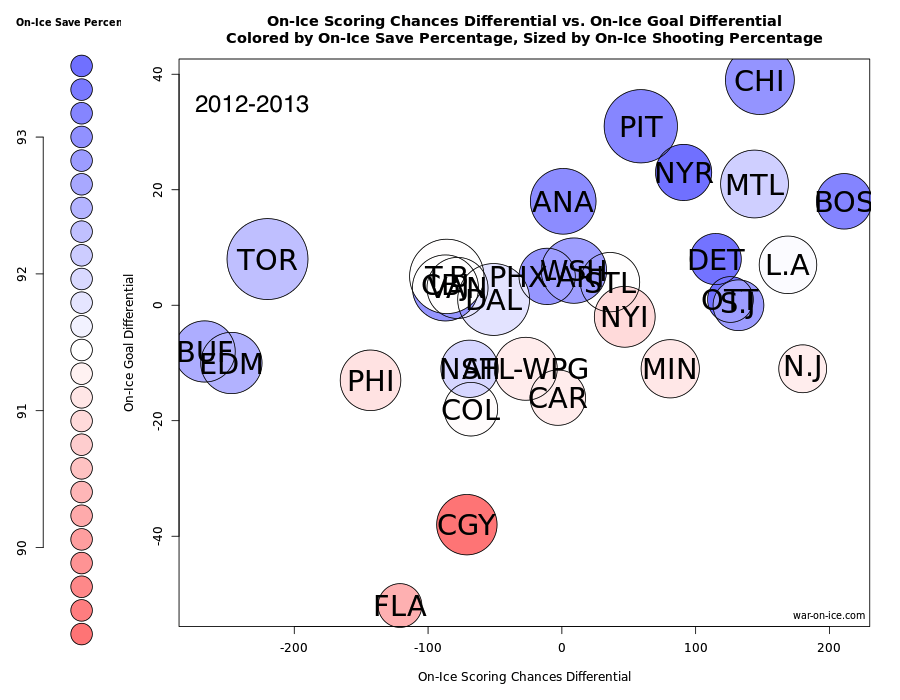 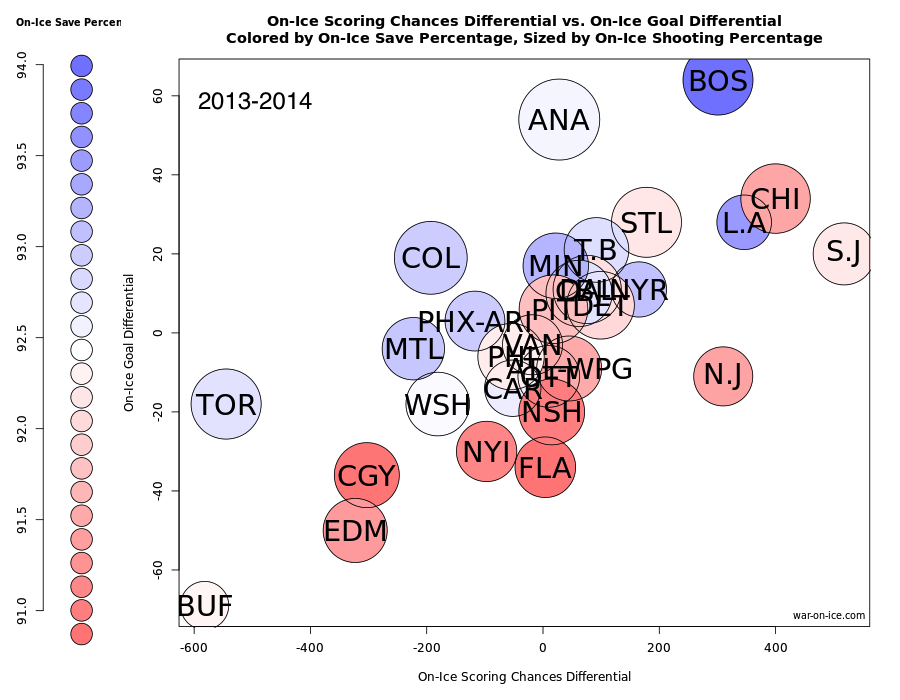 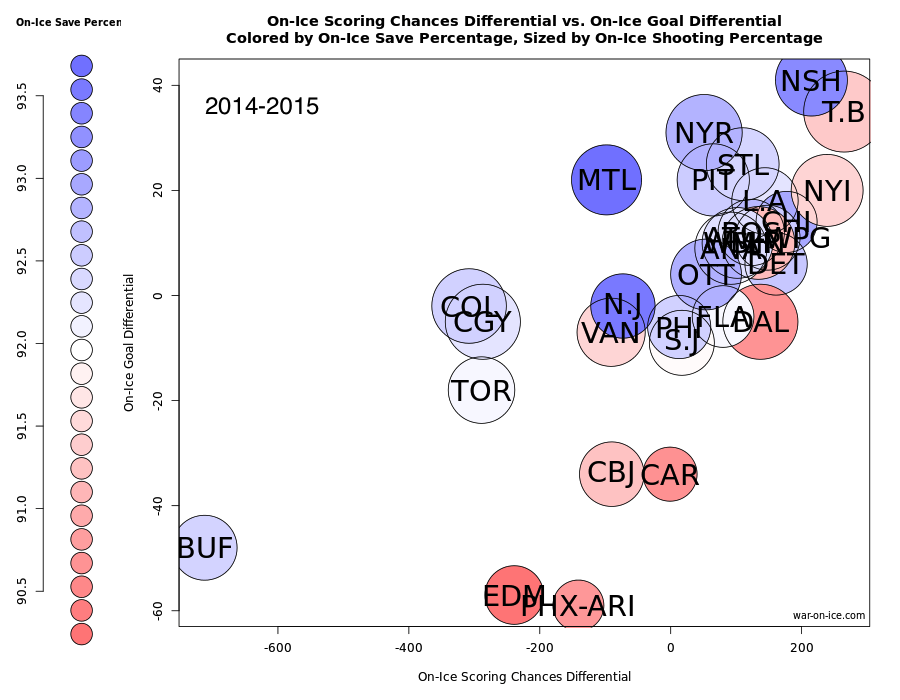 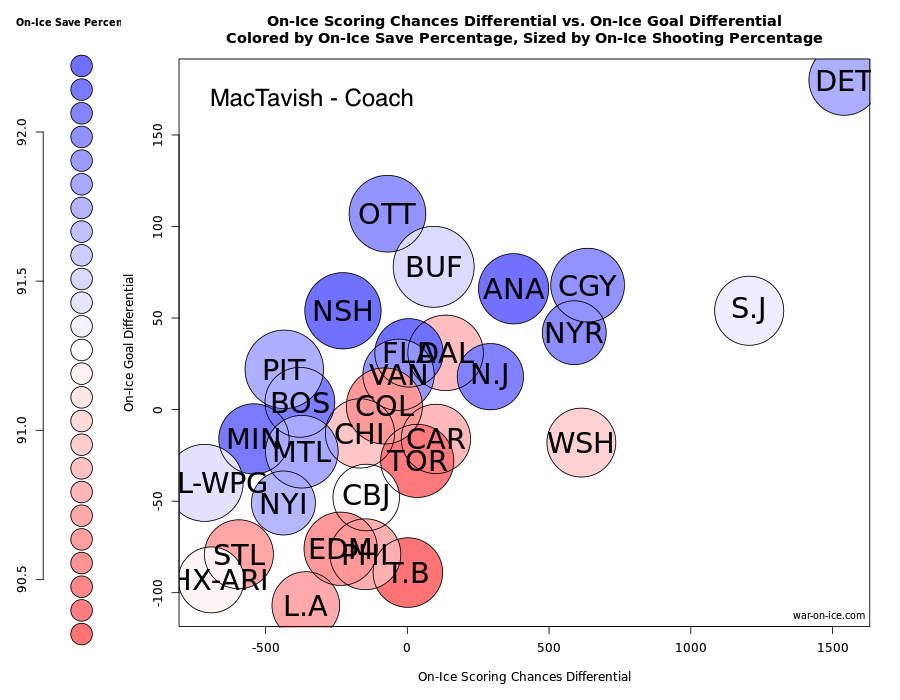 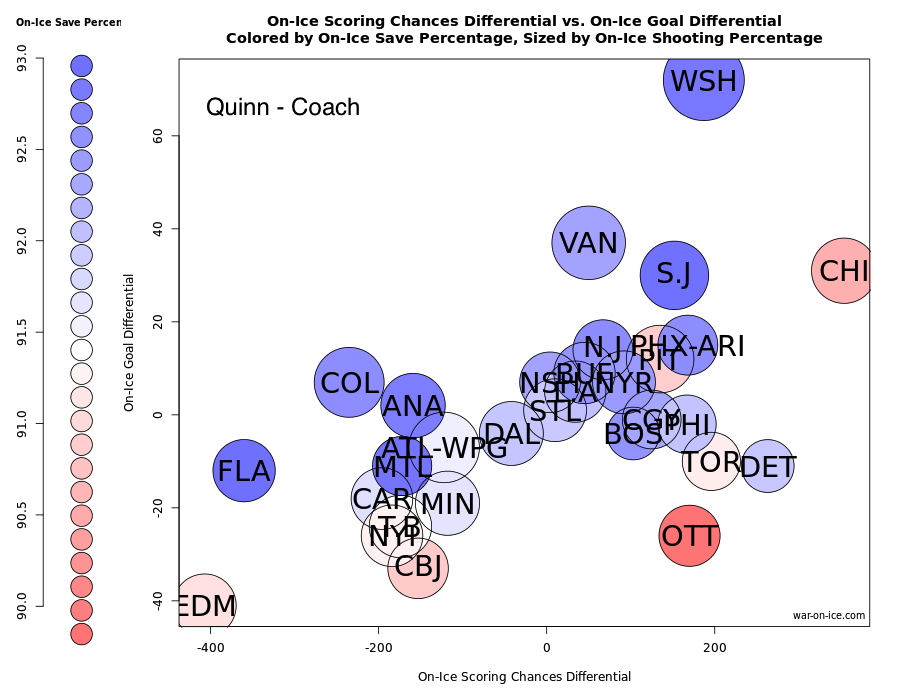 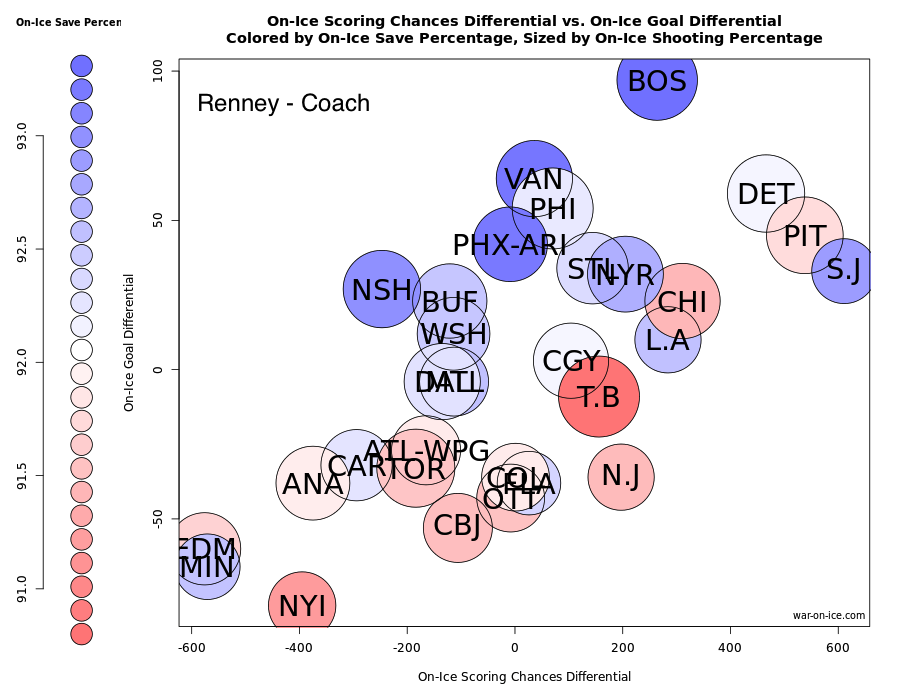 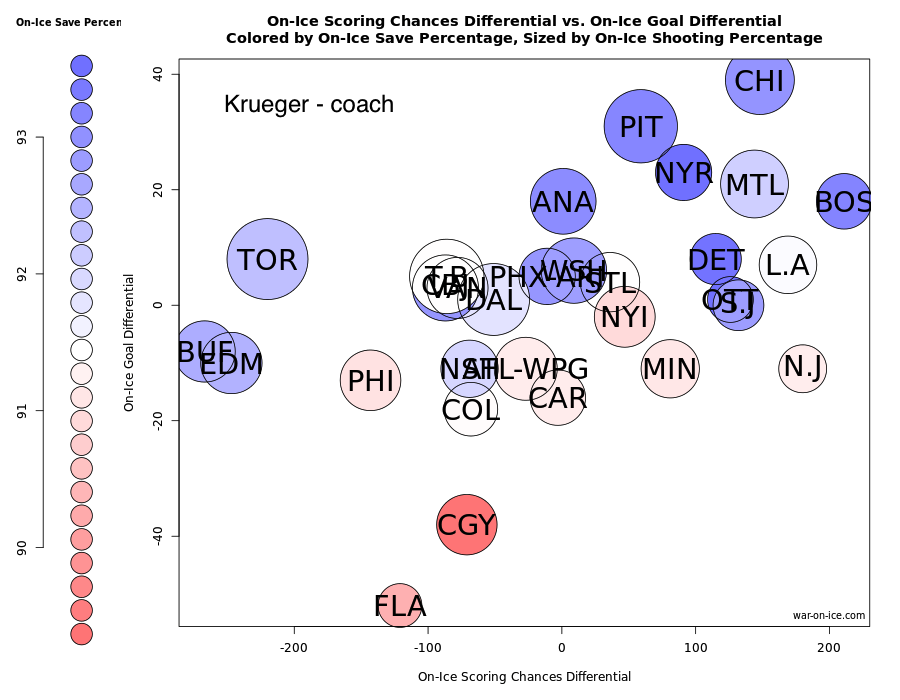 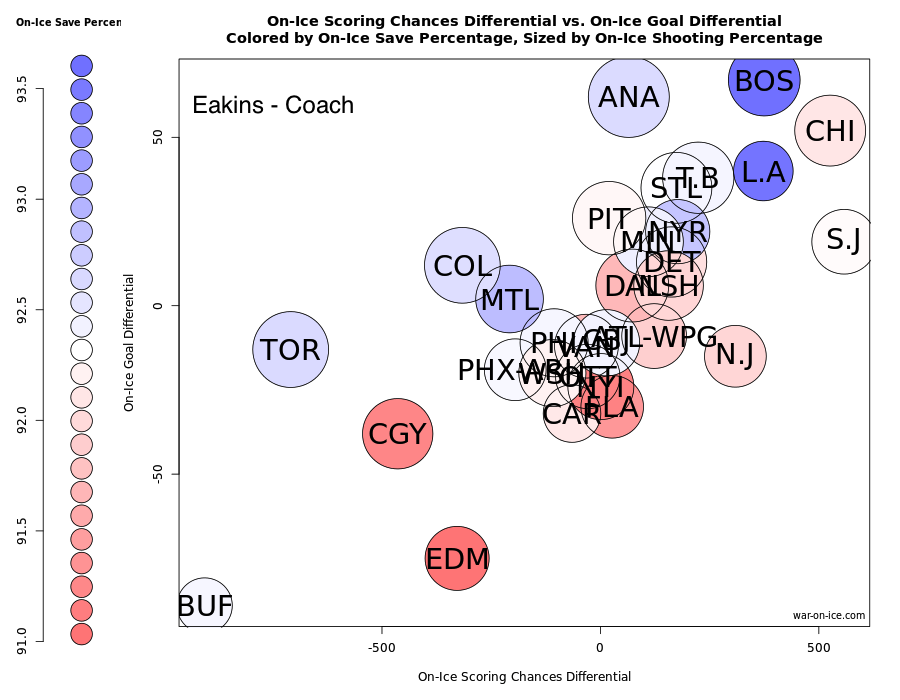 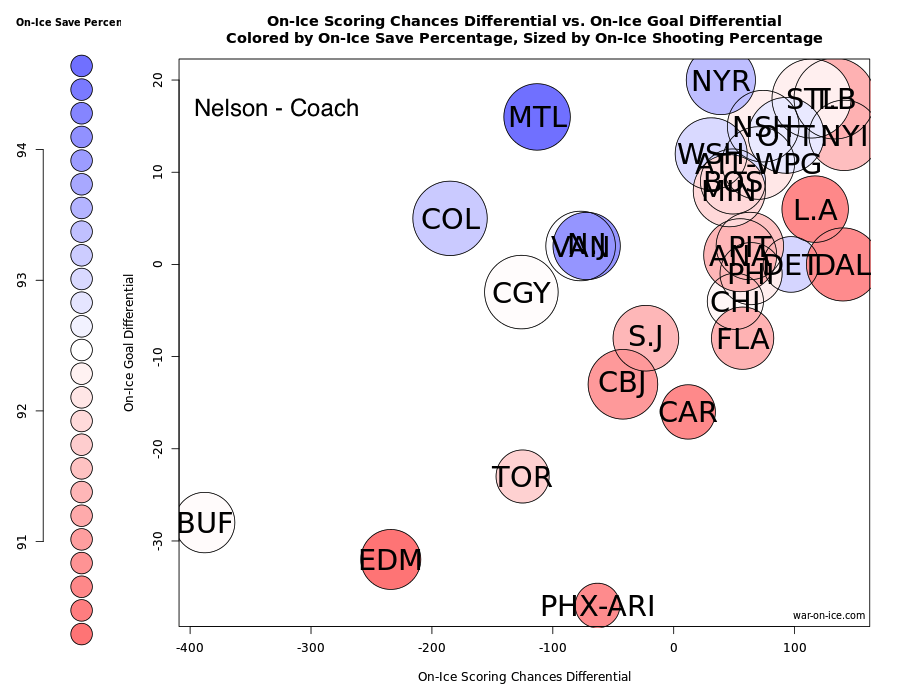 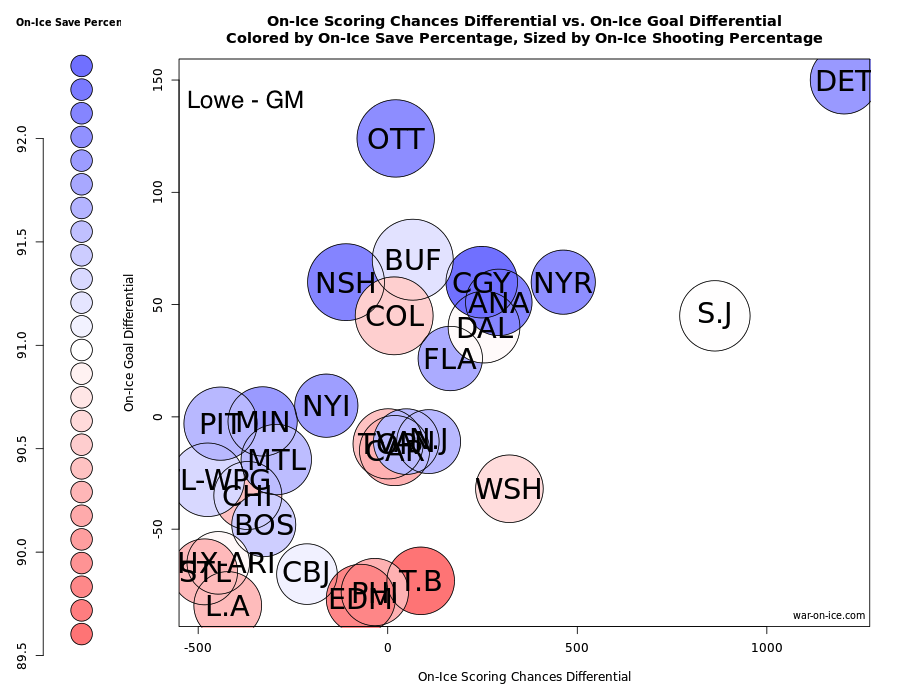 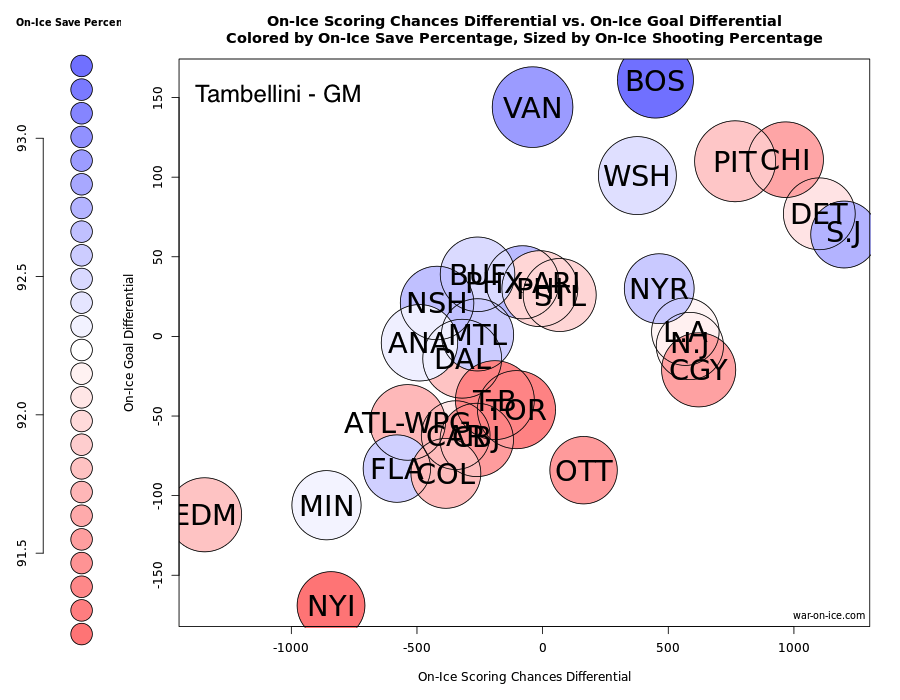 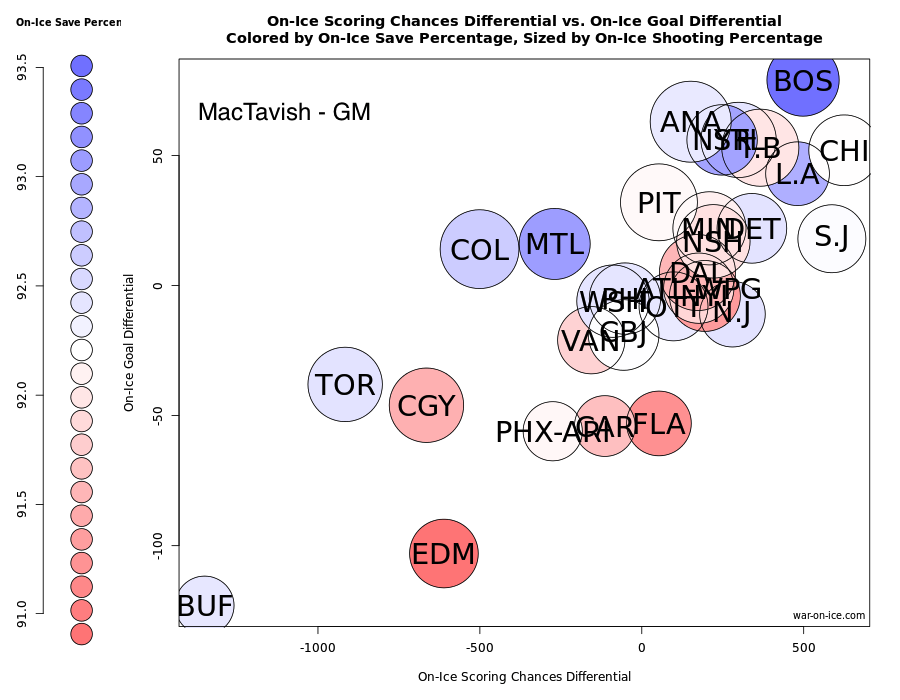 By coach the Oilers had their best success with MacTavish in 2005-2006 (thank you Chris Pronger) and 2008-2009. But since tanking under the watchful eyes of Old Time Hockey Canucks' legends Quinn and Tambellini, the Oilers have not recovered. Tambellini, perhaps under orders, decided to flush what was ostensibly a decent and experienced coach (MacT who by our current measures was not that bad), for the "luck of the Irish."

MacT, when reinstated as GM, promptly pontificated to flush one of the Oilers most valuable prospects, Devyn Dubnyk. Under the small sample sizes and irregular performances of the half-lockout season, Dubnyk managed to produce a slightly less than parity goal differential despite our Scoring Chances atrocities.

Currently we are one of the three worst teams in hockey. Under Nelson there has not been much change, although our SC differential is a bit better.

Certainly our lack of success has something to do with being in the West. The strongest teams during this period have been the Sharks and the Wings. But other teams in the West, like Calgary, have had much more success during this period of time. Of course, Calgary had Iginla & Kiprusoff, but their degree of success and our relative degree of failure is due to more than that.

We are a completely inept organization, and one is forced to conclude that our great dynasty team and its tremendous success created a five-championship hydra that we have not been capable of defeating: we are our own worst enemy.