The Season Ahead: A Look At the Blue Line

Who's in, who's out, and what to expect from the Oilers blue line this season.

Share All sharing options for: The Season Ahead: A Look At the Blue Line

With Rookie Camp opening this week it feels like the season is almost upon us. So let's take a look at another of the weak spots from a season ago, the defence, to see what lies in store for the season ahead.

Last season 14 different defencemen played for the Oilers. Out of those 14 more than half find themselves playing somewhere else this winter; the other six are very jealous. Anton Belov, Denis Grebeshkov, and Philip Larsen have crossed an ocean and are now playing in the KHL. Ladislav Smid was traded to Calgary in November, Corey Potter recently joined him. Nick Schultz landed in Philadelphia. Taylor Fedun is now a member of the San Jose Sharks organization. And Mark Fraser is still looking for a new contract (good luck with that).

All told over 40% of the man games played on the Oilers blue line last season were played by someone no longer with the organization. Given the state of the blue line last year, that's probably a good thing.

To replace the many bodies that were either shown the door, or opted to jump since since the end of last season, Craig MacTavish added three unrestricted free agents to the team's roster. Nikita Nikitin's right's were acquired via trade with the Blue Jacks prior to the draft, he then signed a two-year $9M deal before officially becoming unrestricted free agent. That signing was followed by the additions of Mark Fayne for four years and $14M and Keith Aulie, one year at $800k, on July 1.

So The Defence Will Be Better This Season?

Some will argue that the defence almost has to be better this season than last; being worse would be nearly impossible. And I think there is something to that, but there is a difference between being better and really being improved. 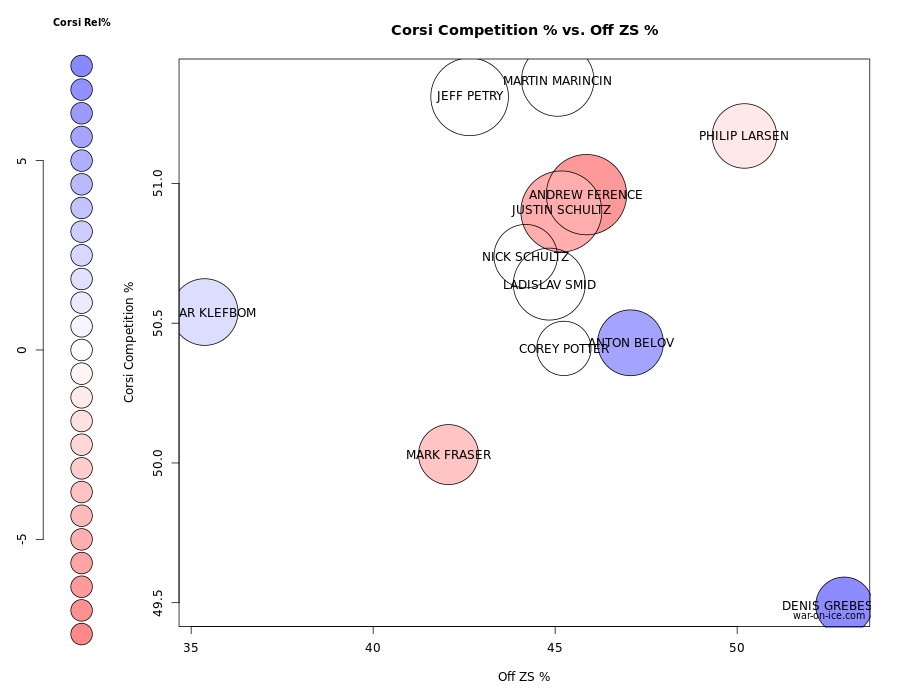 The possession numbers above (courtesy of war-on-ice.com) don't paint a particularly pretty picture of last season. It's worth noting that the goaltending certainly didn't bail anyone out, and it's very tough to look good when the puck is constantly in the back of the net, but this was a group that would have looked bad in front of a mid-to-late-90s Dominik Hasek.

Replacing bad players with players you hope will be better is a step in the right direction, as is adding a new assitant coach, one with a long NHL track record, but the Oilers are still going to need a couple things right if their defence is going to be significantly improved. See the circles for Justin Schultz and Andrew Ference, the Oilers need some help there because one of those two will be joining Jeff Petry, Mark Fayne, and Martin Marincin in the top four this season.

If Schultz or Ference can't cover the bet then the team will have to look to Nikitin to take on that role, but he couldn't crack Columbus' top four last season so that seems like a long shot at best. And all of this assumes that Marincin will be able to play consistent, quality, minutes in the top four, if that doesn't pan out we'll be left hoping that Ben Scrivens can make 59 saves every night.

Who's Knocking On The Door?

At this time last year, if I'd have guessed the Oilers opening night lineup for the 2014/15 season, I'd have had put Oscar Klefbom into it before Marincin. But Kelbom had an up and down yeah with the Oklahoma City Barons, his first season in North America, and it was Marincin who got the call when injuries struck in Edmonton; he made the most of the opportunity and is now considered a lock to make the team out of camp. With Aulie as the likely seventh defenceman suddenly Klefbom looks like a lock to start the season with the Barons. Only a phenomenal training camp or an injury would be the only things that could change that now. And this could all be a very good thing for him.

It seems like we've been waiting for Klefbom to arrive for a while now (pickings first overall has warped our minds about how prospects progress) but he's only played 48 games in the AHL and another 17 in the NHL. If he plays another half a season (or more) in the AHL it almost certainly won't hurt him. He's big, he's fast, and he's good with the puck; I think he's got all the tools to be a very good NHL player and I can't wait to see him in the NHL, but for once the Oilers aren't going to be forced to rush a prospect to fill a hole. It's a welcome change.

So What Are The Opening Night Pairings?

Without having seen a minute of training camp this is essentially a best guess but I think we'll see something like this when the Oilers take on the Flames on October 9.

What Scares Me The Most About This Defence?

The idea of trading Petry. Having signed a one-year deal this summer, Petry is set to become an unrestricted free agent in July. The Oilers aren't going to want to let him walk away for nothing and with Marincin, Klefbom and Darnell Nurse either in the NHL or on the way I suspect that they'll move him in the weeks before the deadline, sooner if/when the season starts to slip away. And the defence will be weakened yet again. One step forward, two steps back.