The Oilers are going to have to make some key tactical adjustments if they want to improve in 2014-2015.

Share All sharing options for: Five Keys to a Successful Oilers Season in 2014-2015

It’s September now and in a little under three weeks time we’ll be watching pre-season puck. That means we’ve had an entire summer to pick apart last season’s edition of the Edmonton Oilers and really get a sense of what they can improve on heading into the season.

We all know goaltending was a major problem for most of the 2013-2014 season, but MacTavish more-or-less addressed that with the additions of Fasth and Scrivens. They should be a marked improvement on the Dubnyk/LaBarbera tandem that the Oilers started with a season ago.

Since then, MacT has also added several players in various roles throughout the lineup, both on offense and on defense. The current roster isn’t without holes going into training camp, but this is the lot we’ve been given, and it’s a prettier picture than the one we were looking at a year ago.

But a questionable roster didn’t account for the entirety of the team’s troubles in 2013-2014. So what are some adjustments the team can make going into next year?

Edmonton cashed in on a meagre 17.0% of their power plays last season—21st in the league overall. Their total of thirteen short handed goals against was the most in the NHL. That was significantly worse than what they accomplished in the lockout-shortened 2013-2013 season, when they were 8th in the league, clicking away at 20.1%.

This team has way too much young offensive talent to not have a power play in the league’s top ten. Conventional wisdom says that new Assistant Coach Craig Ramsay should be able to make things right.

I see part of the fix coming in the form of an increased role for Nail Yakupov on the man advantage. Setting up one-timers for Yak at the top of the circle should give him a little more confidence, which in turn just might spark improvements in his all-around game (we’ll call fixing Yakupov item 1b).

Taylor Hall finished 29th in TOI/G with an even 20:00, and it wouldn’t hurt to see an extra minute or two added to this total.

I’m not suggesting Taylor Hall be given 27 or 28, or even 25 minutes a night. Dallas Eakins tried that a few times last season and the results were underwhelming, as Bruce McCurdy noted at the time over at Cult of Hockey.

It shouldn’t be a stretch to expect Taylor Hall to finish in the top ten in TOI/G among forwards. Every extra minute (within reason) that Taylor Hall is on the ice is another minute the Oilers are improving their chances of succeeding.

Another strength in Hall’s game I’d like to see incorporated even more into the team’s overall game plan is his proficiency in entering the offensive zone. In 2012-2013, Jonathan Willis found that Hall was "a beast" at this:

"…three quarters of the time he enters the opposition zone he maintains control of the puck, and the Oilers’ shot rates off his entries are tremendous."

In his ongoing zone entry project (which you can help support here), Corey Sznajder of Shutdown Line has been noticing the same:

There's Taylor Hall and everyone else. pic.twitter.com/jTCHWkxTPM

Unless Justin Schultz spent the summer perfecting his defensive game in the hyperbolic time chamber, then it’s more than likely we’ll see more of the same uninspired play from him in his own end next season.

Take a look at the player usage chart below, courtesy of Rob Vollman at Hockey Abstract. Note that I’ve used Corsi Rel instead of Corsi On, because who wants to stare at that many orange and red bubbles? 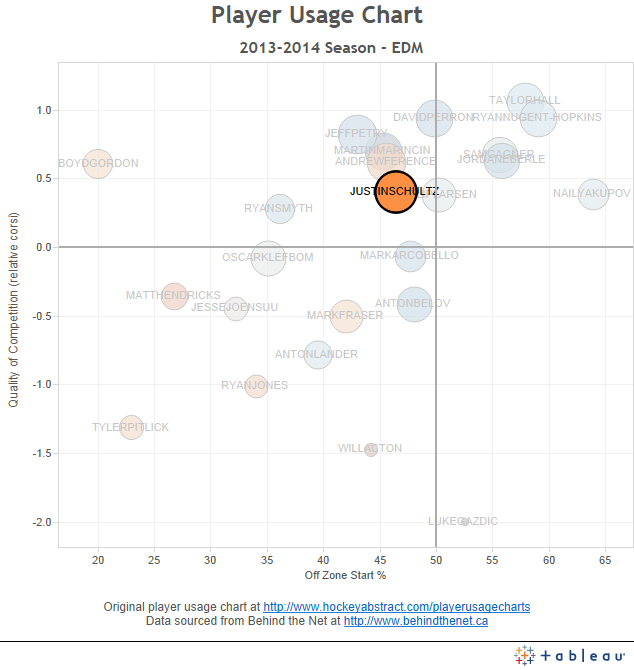 If Fayne and Nikitin can come in and take on the second-pairing minutes that Ference and Schultz saw last season, then that should allow Schultz to start more shifts in the offensive zone, and more against third-pairing opposition. Essentially, he should make a significant trip southeast on the same graph next season.

Offense is Schultz's game, and he needs to be put into a position to succeed if he’s going to help this team win hockey games.

Due to MacTavish’s inability to bring in a suitable option at second line centre, it’s now a foregone conclusion that Leon Draisaitl will start the season with the big club, barring a disastrous training camp and preseason.

It’s going to be of the outmost importance to play to the youngster’s strengths, and keep him in situations in which his lack of experience can’t hurt his personal development, or the team’s chances of success. This probably means something like third or fourth line competition, heavy offensive zone starts and a healthy dose of power play time for the kid that ran the man advantage for the Prince Albert Raiders during his time there.

The research that I’m about to refer to disappeared with the rest of Tyler Dellow’s work at mc79hockey.com, but bear with me. I’m sure many of you will remember the post I’m referring to.

Dellow found that, around the middle of last season, a funny thing happened to the Oilers CF% following an offensive zone face off won by either Ryan Nugent-Hopkins or Sam Gagner. Their shot attempts actually plummeted following a win by either player, because of what appeared to be a tactical blunder.

It was speculated that, by committing one or both wingers to helping the centre on the draw, the Oilers were winning more offensive zone face-offs at the cost of puck possession. With two or three players tied up inside the face-off circle, the opposition had an easier time regaining the puck and making their way down the ice and into the Oilers zone. It was ludicrous really, and it went on for close to half the season.

@mc79hockey Yeah, understood. But focusing on winning the faceoff at all costs and giving up shots as a result is kinda laughable if true.

The above example illustrates the fact that Edmonton Oilers Hockey Operations needs to do a better job next season of  addressing these tactical shortcomings as they appear, in all three zones, in all aspects of the game.

Here’s to hoping the additions of Tyler Dellow, Craig Ramsay and Rocky Thompson to the Oilers staff will help with that.