Jim Corsi - goalie and a father of the Corsiverse - Concordia Archives

I like goaltenders. I like their unconventional personalities, their athleticism, their inconsistencies. I like that on occasion they dominate play in a manner impossible for any other player, that (for example) a rookie netminder can emerge during the playoffs to lead his team to Lord Stanley's glory. Goaltenders are different and think differently. It's no wonder that the eponymous inspiration of our beloved Corsiverse is a goaltender. Good goaltending is mental possession of the flow of possession.

But how to measure the art which is goaltending? This question has received limited attention from the Corsiverse and it's not surprising. We have ignored goalies relative to other players because they do many small things that are difficult to count. But slowly this has been changing.

I was pleased to discover that before its demise (or ascension depending on your perspective) Extraskater had been publishing goalie corsis, fenwicks, and save percentages associated with several on-ice situations. Inspired by this fresh perspective I undertook an analysis of even-strength, short-handed, and all-situations save percentage data, which I converted into Save Percentage Plus (SV%+). Extraskater data are no longer available to the public.

Save Percentage Plus (SV%+)

SV%+ normalizes save percentage data in relation to the league average. As described by Kurt from Broadstreet Hockey:

Modeled after stats like ERA+ and OPS+ in baseball, it's expressed in such a way that anything above 100 means a goalie is posting an above-average save percentage and anything below 100 means they aren't. The number, in short, expresses how many goals a league-average goalie would allow in the number of shots it would take a given goalie to allow 100.

It's calculated as follows:

I calculated SV%+ data for goaltenders who played 25% or more of regular season games (21+) for short-handed (shSV%+), even-strength (esSV%+), and all-situations (allSV%+) using Extraskater save percentage data for the 2011-2012 season.

The chart below displays esSV%+ (abcissa) plotted against shSV%+ (ordinate). Lines at 100% indicate league averages. Bubble size corresponds to allSV%+. Bubble colour indicates Fenwick Against for all-situations (allFA), the darker the bubble the higher the allFA. All table and chart data may be viewed at this google docs spreadsheet (chart at this link is interactive). 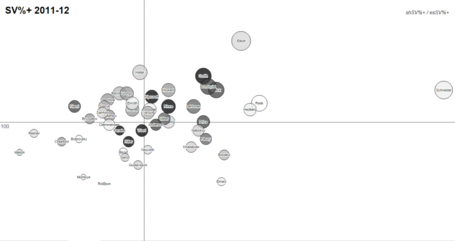 Generally speaking being above the centre line is good, particularly if you are on a weak team, and being in the top-right hand quadrant is great.

The upper right-hand quadrant contains performances that are above-average with respect to both esSV%+ and shSV%+. The best performances are the darker and larger bubbles (Lundquist, Quick, Smith, Rinne, Kiprusov, etc). Outliers such as Schneider are interesting but tend to have bubbles that are lighter in colour indicating an excellent performance short-handed while facing fewer fenwicks.

The lower right-hand quadrant contains performances that are above-average with respect to shSV%+, but below average when in comes to esSV%+. These goalies performed above expectations on the penalty kill, or are less-than average goalies on teams with good penalty killing percentages.

The lower left-hand quadrant contains below average esSV%+ and shSV%+ performances. Bubbles in this area tend to be smaller and lighter, as these data points have lower associated allSV%+ and smaller FA values. Bad goaltenders play less and face fewer fenwicks.

Schneider's short-handed performances were excellent in 2011-2012 and his even-strength numbers were better than average. During the 2012 playoffs he was chosen over Luongo and eventually the conflict of having two good goalies (and one lousy contract) caused Mike Gillis to trade Schneider to New Jersey in 2013. Since the trade the Devils have moved from 16th to 1st overall in PK%, whereas the Canucks sank one position from 8th to 9th. Has Schneider continued his excellent short-handed performance? We will find out in subsequent analyses. In comparing Schneider to Luongo above we can see here that he was better with regards to SV%+, although Lungo faced twice as many attempted (but not blocked) shots.

Dubnyk greatly out-performed Khabibulin in 2011-2012. He was over-average with regards to even-strength and all-situations, while the Bulin Wall was not. Khabibulin did, however, score better than average short-handed while Dubnyk did not. The Oilers finished with a penalty kill percentage of 82% and took 942 minutes of penalties (good enough for 18th in the league).

Here we pay-tribute here to a mighty warrior on his final tour of duty. Roloson's 2011-12 season was not great. He is the smallest, lowest bubble on the chart (so small that Google docs has removed his name from his bubble so as not to embarrass him). Nevertheless, Roloson deserves mention. He is one of the Oilers' greatest goalies.

SV%+ is a measure that normalizes save percentage to the league average. Numbers above 100% are better than average. The above chart displays short-handed (shSV%+), even-strength (esSV%+), and all-situations (allSV%+) data for goaltenders who played more than 21 games of the 2011-2012 NHL season. Also displayed as the colour of the bubble is fenwick against (allFA), with darker colours representing more attempted unblocked shots. The bubbles are charted in such a way that differences between the performances are enhanced.

Goaltenders probably see hockey differently. I happen to think this is a good thing. Perhaps in trying to extract meaning from the above charts we should keep in mind that it's quite likely that there are many ways of being a great goaltender. Quantitative analysis can be a celebration of difference, rather than the reductionist pursuit of efficiency.

Let me know what you think these bubbles mean and stay tuned for charts for subsequent seasons.