Grant Fuhr is one of the greatest goaltenders in the history of the NHL. As we all know he was apart of all 5 Cups for the Oilers and was inducted into the Hockey Hall of Fame in 2003. He also became the first black player inducted into the Hall.

In the history of the NHL, the Edmonton Oilers have led the way by dressing 11 black players (12 if you count Darnell Nurse who has played in the preseason but has yet to make his Oilers regular season debut) which is the league record for a single franchise. Some have been impact players while some have only had a cup of coffee with the team but they all deserve to be profiled. 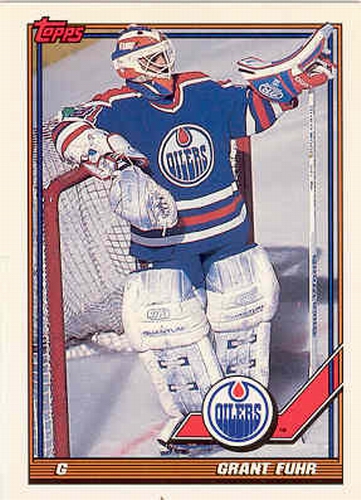 The first. Fuhr was the 8th pick by Edmonton in the 1981 draft and after starting his career as Andy Moog's back up would soon take over the starting netminder role.

-NHL record for longest undefeated streak from the start of a career, unbeaten in 23 games in 1981-82.

-14 assists in the 83-84 season which is still the single season record for a goalie.

Even with the 80s being the wild, wild west for scoring Fuhr was still a rock in net for the Oilers and even after his time with Edmonton came to a close midway through the 1990-91 season, his career was far from over as he had stints with Toronto, Buffalo, LA, St.Louis (where he set an NHL record by playing in 79 games, the most for a goalie in the regular season in 1995-96) and Calgary before retiring in 2000.

Pokey Reddick was probably the first player in league history to use it and by golly did he make it look good. The former Winnipeg Jets starter didn't play very much with the Oil and spent most of his time in the organization in the AHL playing with the Cape Breton Oilers he did get his name on the Stanley Cup in 1989-90.

After Edmonton, Pokey had stops in numerous minor leagues in North America as well as a 2 game stint for the Florida Panthers in 1993-94. Reddick retired in 2003 after playing in the UHL with the Fort Wayne Komets. 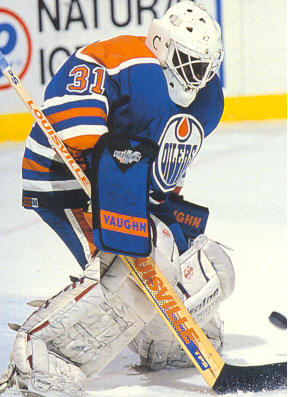 He stood only 5'7 but worked incredibly hard and turned that into an almost 20 year long pro career in the NHL and in Europe. Brathwaite's time in Edmonton was during their "dark years" in which the team missed the playoffs every year from 1993-94 to 1995-96 and for the most part of his time he spent it as the backup to Bill Ranford

It was after he left Edmonton it was then he was able to be thurst into a starting role which occurred with the Calgary Flames in the 1999-00 season where he had a record of 25-25-7 with a GAA of 2.75 . Guess who was also his back up that year in Calgary? One Mr.Grant Fuhr.

Freddy's career would take him all over the hockey map as he had various stints in the NHL, AHL, Russia and Germany before he called it a career in 2012.

The tenure of Mr.Gage as an Oiler didn't last very long but he did contribute to a moment in NHL history during his time between the pipes for the Orange and Blue against the Jets in 1995-96.

Gage let in two goals in 4 seconds from Winnipeg's Deron Quint to tie the league record for the fastest two goals by one player, a mark that had been previously set by Nels Stewart in 1931 with the Montreal Maroons.

Gage's NHL career was just 23 games long, all of them spent in between the pipes with the Oilers where he would put up a career record of 4-12-1. He would have a long career in Europe and retired in 2008.

Mike Grier was one of two black players to make his Oilers debut in 1996-97 and also made history being the first African-American member of the Oilers (Fuhr, Reddick, Brathwaite and Gage are Canadian).

Grier, spent 6 years in Edmonton and proved himself to be a very dependable checking winger who had a wonderful offensive touch as he had two 20 goal seasons. Grier was also tough as he battled through injuries and became a fan favourite for his toughness.

Grier would also spend time with the Sabres, Sharks and Capitals became the 254th player to reach the 1000 games played mark during the 2009-10 season and would retire after the 2010-11 season.

One tough defenceman who would fight anyone and was very reliable in his own end of the ice, Brown made his debut for the Oil in 1996-97 along with Grier and Georges Laraque and like Laraque over time he racked up the penalty minutes but did more than just fight although he had some pretty awesome tilts.

Brown would spend 6 seasons in Edmonton before being traded to the Bruins in 2002. The rest of his career would see him make stops in New Jersey, Vancouver as well as time over In Europe playing in Germany and Austria. Today Brown is an assistant coach for the Memorial Cup champs in the form of the Edmonton Oil Kings.

Georges Edy Laraque is his government name but many in Edmonton simply called him Big Georges.

Laraque spent 8 seasons in Edmonton and fully endeared himself to the city, he would help out local charities, always signed autographs and even tried his hand at FM radio show hosting in the summer time. The tough guy from Montreal became the heavyweight champ in the league taking on such pugilists in the league as Tie Domi, the late Bob Probert and Donald Brasher many times in his career.

When Laraque signed a free agent deal with the Phoenix Coyotes an going away autograph session with him was held and fans waited hours in line to get something signed from the big man who still has a home in YEG.

Other stops for Laraque in his career would see him land in Pittsburgh as well as the Montreal Canadiens as he was able to end his career playing for the team that he grew up watching. 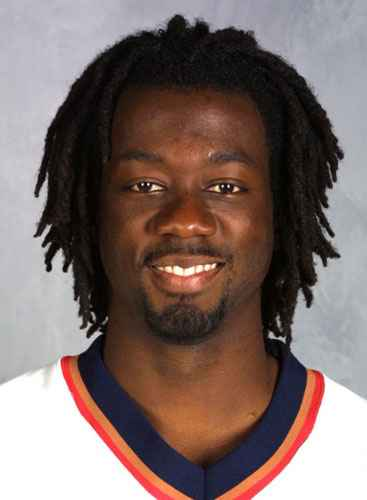 True story, when the Edmonton Oilers used to do their yearly autograph session at West Edmonton Mall, my grandmother took me down for It and we waitied in line for his and Scott Furgerson's autograph for 2 hours. It was well worth it.

Carter was the first black player to lead the Oilers in scoring as he put up 60 points in the 2001-02 season and also became an assistant captain during his time with the team. His dreads were also something that many loved and the fact that he shaved his head this summer I think made us all very sad.

Carter, was a Quebec Nordiques draft pick in 1992 out of Michigan State University and was traded first to the Colorado Avalanche and then to the Washington Capitals in the 1996-97 season. He would make his debut with the Caps in that same season but would be dealt once more in the same year to the Boston Bruins.

He would wind up in Edmonton during the 2000-01 season and would remain in Edmonton until the 2002-03 campaign.

Oh and Carter also scored one of the greatest goals in Team Canada hockey history when he scored the Overtime winner against Sweden in the Gold medal game at the 2003 World Hockey Championships and the moment was very memorable for the incredibly long review to see if the puck crossed the line (It felt like it took 98 hours).

Today, Carter is an NHL on NBC analyst and also appears on Fox Sports West during LA Kings games. 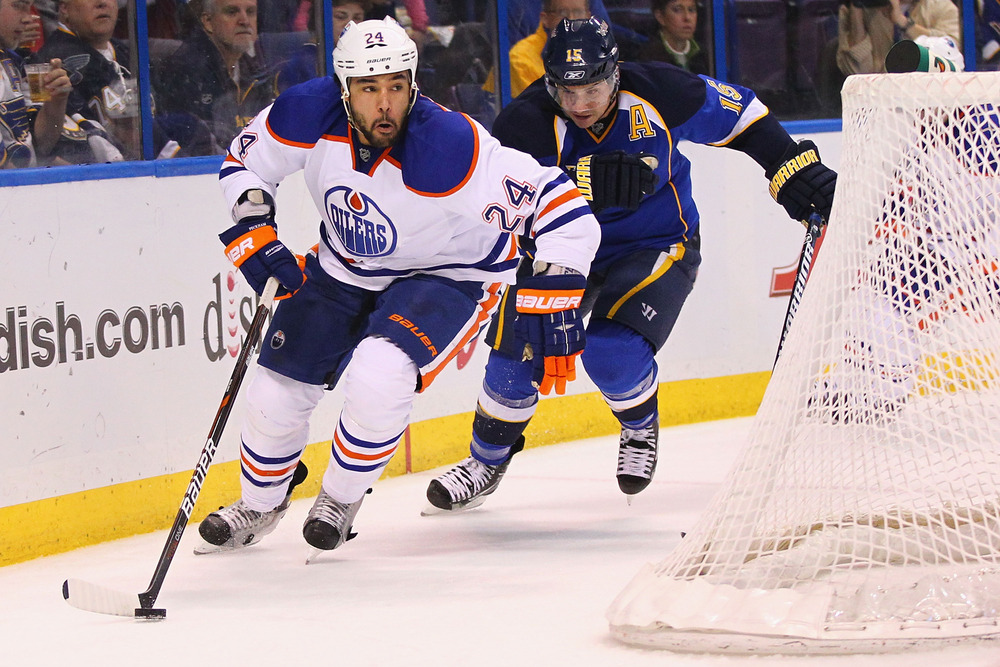 Who was the only man that Claude Lemieux fought in his comeback season with San Jose in 2008-09? Why Mr.Peckham! Yup, Peckham squared off with the former Conn Smythe trophy winner and decisively won in a scrap that was Peckham's to take from the start.

Peckham spent 6 seasons patrolling the Oilers blueline from 2007-08 to 2012-13 and was one of the toughest hombres night in and night out that in recent years as lacked size in it's line up. Peckham right now is in the Chicago Blackhawks organization and spent all of last year in the AHL with the Rockford IceHogs.

Shawn Belle only spent a cup of coffee with the Oilers but he was just the 3rd black defenseman in team history after Brown and Peckham. The hometown boy spent just one season in the Oilers organization, playing only 5 games in Edmonton to go with 39 games in the AHL with the Oklahoma City Barons in 2010-11 season.

Belle is best known for his time with Canada's World Junior team as he won a Silver medal at the 2004 tournament and a Gold medal in 2005.

Currently, Belle is playing in Europe and will make his debut with KHL Medvescak Zagreb in the KHL this upcoming fall. 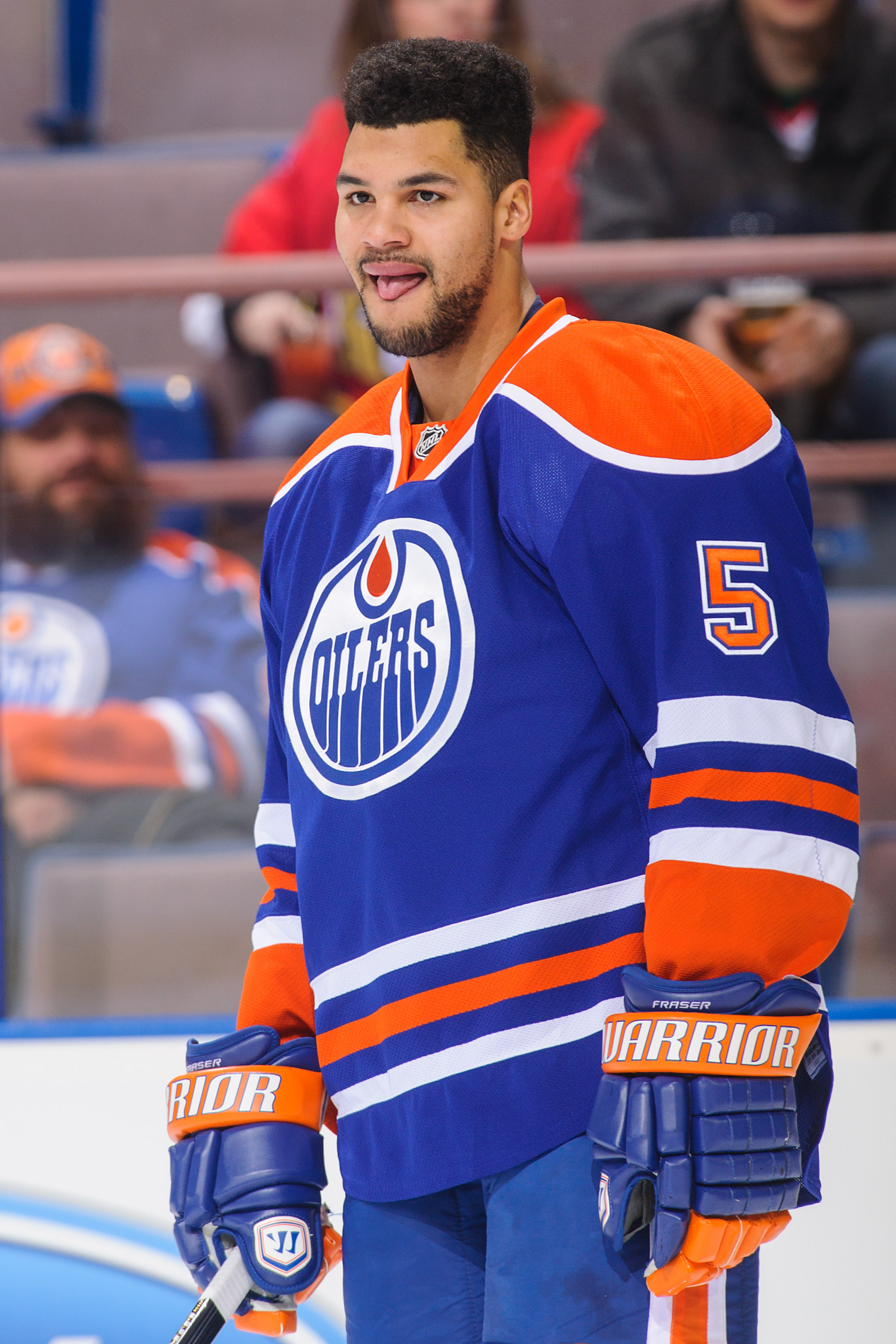 Mark Fraser's high top was probably one of the greatest hairstyle in NHL history. I was incredibly jealous of how good it looked. Fraser last year played 23 games with Edmonton after being traded and did end his goal drought of 4 years against the St.Louis Blues on March 13th, 2014.

Fraser was acquired by the Oilers in a trade with the Toronto Maple Leafs which saw Edmonton send Cam Abney and Teemu Hartikainen east for the big D man In late January 2014. 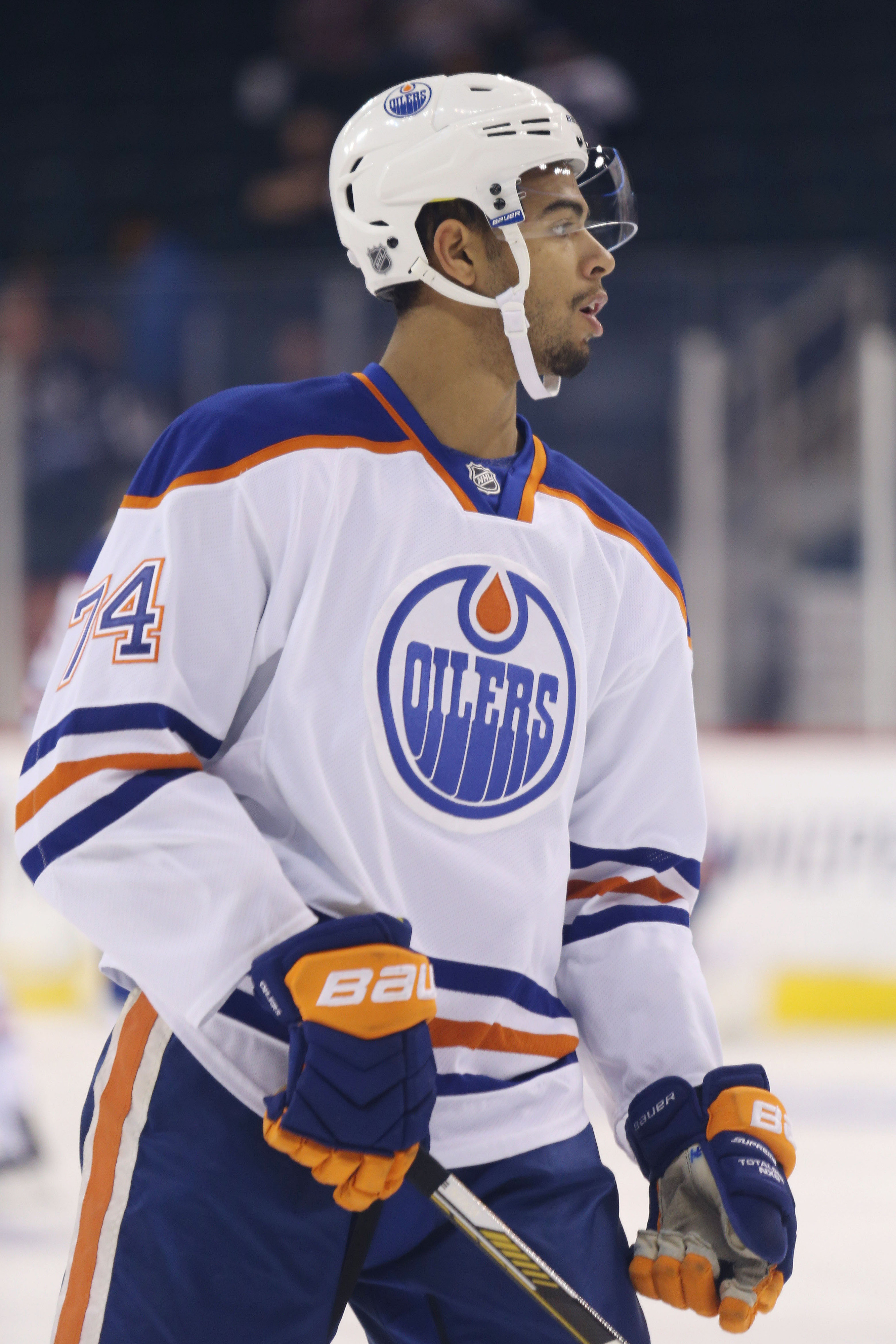 The 7th overall pick in the 2013 NHL Draft is expected to be one of the new faces of the Edmonton Oilers and in time could become one of the league's top defencemen. The key for management will be to not rush him but in the OHL his play has spoken for itself as he's put up 142 points in three seasons in the OHL with the Saulte Ste. Marie Greyhounds and last year attended Team Canada's World Jr camp but was not named to the final roster.

Nurse's sporting background is very rich, his father is Richard Nurse a former Wide Receiver in the CFL and his uncle is former NFL quarterback Donovan McNabb and his sister, Kia is a member of Canada's national women's basketball team.

Playing with elite young talent will do nothing but wonders for Nurse's career and a successful one as a black player will show once again that the faces of the game are changing.

Edmonton's impact in the diversity of the NHL is something that will hopefully never, ever be forgotten.

ion is below the jump. We explored a couple of controversial topics and the authors were very forthcoming.

The Copper & Blue: A Book Review: Black Ice
Black Ice is a history of the establishment of the black population in maritime Canada, their towns, their culture, their churches, and their game -- hockey.