How Much Do The Oilers Have Left To Spend?

MacT has spent some money this summer and still needs another centre. How much has he got left to spend?

Share All sharing options for: How Much Do The Oilers Have Left To Spend?

With Nikita Nikitin, Mark Fayne, and Benoit Pouliot added to the roster, and with Jeff Petry and Justin Schultz still in need of new contracts, the Oilers suddenly find themselves within shouting distance of the NHL's 2014/15 salary cap of $69M. Using the capgeek.com I created a hypothetical roster to help get an idea of the options that might be available to the Oilers. 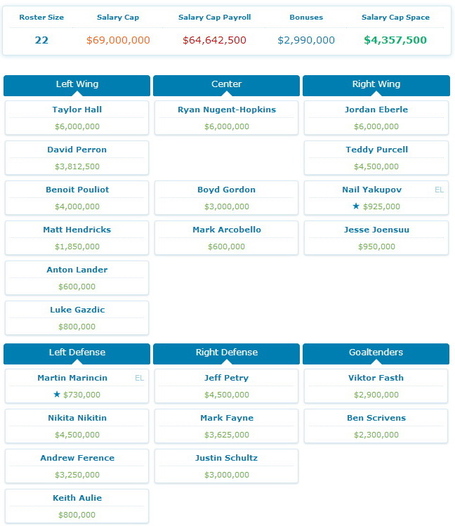 As you can see I've given Petry and Schultz $4.5M and $3.0M respectively; if you disagree adjust those values as required. In the scenario above the Oilers have slightly more than $4.3M to spend and just the second line centre spot to fill. That isn't a lot of money but it's probably enough to get a deal done.

But before you go and spend all of that on a centre though you might want to consider the $2.99M worth of bonuses that hasn't been accounted for yet. The bulk of those bonuses ($2.85M) are on Nail Yakupov's contract, Martin Marincin is the only other player currently on the roster with any bonuses in his contract. With the cap set at $69M the Oilers can, if they choose, have up to $5.175M (7.5% of the upper limit) worth of bonuses that do not count against the salary cap. When the season ends though and all the dollars are added up if the bonuses achieved push the Oilers over the salary cap that amount will have to be made up in 2015/16.

No matter how you slice it though, unless the team trades for a second line centre the Oilers will have to use some of the bonus cushion to start the year. To bring in a free agent and avoid the bonus cushion they have less than $1.4M to spend, that's simply not going to happen. And even if they drop Leon Draisaitl onto the second line it's the exact same thing. Assuming Draisaitl signs for the maximum his bonuses would bring the Oilers total to $5.84M, meaning he would effectively count for $1.59M ($0.925 + $5.840 - $5.175) and the Oilers would have another $5.175M worth of bonuses that might need to be accounted for down the road and only $2.875M of remaining space.

It's unlikely that all of the bonuses would be achieved, and a player or two will end up on LTIR at some point clearing some space, but I doubt that the Oilers are going to want to risk a cap penalty at the end of the year. That's because most of this season's roster is also under contract for next season as well, and the team will need to get a second contract done with both Yakupov and Maricin and will need to either re-sign or replace Viktor Fasth. To say the least dollars will be tight, a cap penalty would make the situation worse.

So as it stands right now I actually think the Oilers cap situation works against Draisaitl. If I had to guess I say that the most likely options to get a second line centre are to sign one for around $3.5M leaving a little buffer for the bonuses, or make a trade that would likely involve Petry or Schultz who would then be replaced by the much cheaper Oscar Klefbom. There really aren't a lot of other options.

It's kind of amazing how quickly a team can get themselves in cap trouble.