Unrestricted free agency is in full swing and the Oilers have been active, but I don't think there's much doubt that the Oilers made their most important acquisition of the summer at the draft. The club selected Leon Draisaitl with the third pick, and while an argument could have been crafted in favor of Sam Bennett (who went to Calgary with the very next pick), Draisaitl wasn't a reach at third overall and the Oilers are right to expect him to have a fantastic career.

But let's try to be slightly more specific. One way to do that is by looking for other players with a similar statistical profile to Draisaitl. Those of you who read my work leading up to last year's draft will already know my methodology for finding comparables, but I'll restate it here for those who aren't familiar.

I'll be looking for players drafted out of the CHL in their first year of draft eligibility who were selected between first and eighth overall, and have an adjusted goals per game and points per game within 10% of Draisaitl's. Why am I adjusting? Since I'll be looking at players drafted as far back as 1981 (which is when the draft age stabilized at 18), it's necessary to adjust for the change in levels of goalscoring across eras. The graph below shows how many goals per game were scored in the three CHL leagues since 1980-81: 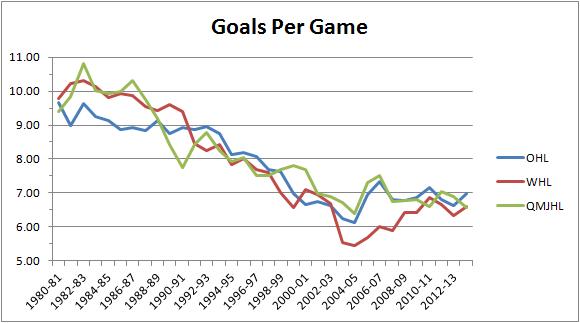 So you can see that adjusting is important. Fortunately, once we have this information, the it's pretty easy to do. I've adjusted each player's offense to a league that scored 6.8 goals per game before comparing. Ryan Smyth, for example, was drafted in 1994 after scoring 0.69 goals per game and 1.46 points per game, but Smyth played in a league that scored 8.44 goals per game, which is 19.4% more than the benchmark. As such, for the purposes of comparing him to players today, his totals are adjusted down 19.4% to 0.56 and 1.17 respectively.

So who are Draisaitl's comparables? In this case, they had an adjusted goals per game rate between 0.53 and 0.65 and adjusted points per game rate between 1.48 and 1.80 (90% to 110% of Draisaitl's production), and were selected with one of the draft's first eight selections. These were the results (keep in mind that this will yield statistical, and not always stylistic comparables):

That's a strong list. Joe Thornton (like Draisaitl, not noted for his footspeed) is both the best stylistic match as well as the "everything goes right" option, but all of the players who've had some time to develop have found a way to be very useful for their NHL teams, and the two just now starting their careers are poised (drink!) to do the same. Speaking of Sam Bennett, those of you who have followed the draft closely might be wondering about his place below Draisaitl on the scoring list given that he actually scored at a higher rate than Draisaitl if we look at just the raw numbers. As you can see in the first graph, Bennett played in a higher scoring league, which results in a rather substantial gap in Draisaitl's favor. That one point doesn't make Draisaitl the right pick at third overall, but it's illustrative of the impact that adjusting for league scoring has.

But what about adjusting for age? Draisaitl is the oldest player on the list here, and Bennett is among the youngest. Should that have been a concern for the Oilers? I think answering this question is tricky because we're talking about the absolute cream of the crop here, and I'm not convinced that what applies to the hoi polloi of the draft will apply to the first few players selected.

Unfortunately, testing this is difficult. I thought about just looking at the oldest and youngest players drafted in the top three, but that doesn't really yield enough players. Expanding it beyond that gets more players, but we know that several of them won't become elite NHL players. Using the first option, I compared the unadjusted points per game of top three picks during their last CHL season with their first five years after being drafted; it doesn't look like age has much impact: 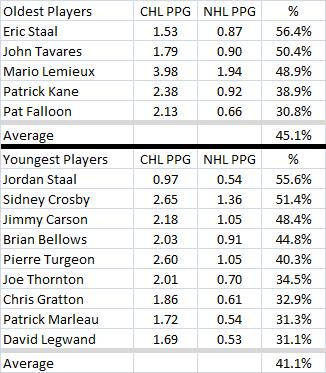 But if we use the same methodology to look at picks four through eight, the impact looks significant indeed (anyone playing less than fifty NHL games in their first five post-draft seasons gets counted as having zero NHL points per game):

It's no different if we look at the median rather than the average. For the very top picks, if there is differentiation it favors the older players, and for the picks four through eight, the younger group carries the day. So what does that mean for Draisaitl? I don't think we can say that age isn't a concern, but I think it's less of a concern than it would be if the Oilers were picking seventh or eighth. At minimum, it's encouraging to me that other older players chosen this high in the draft seem to carry their offense to the NHL as well as their younger peers. It's also encouraging (if unsurprising) to see that the very top picks are bringing more of their offense to the NHL than other players drafted inside the top ten.

With plenty of time before the season starts, I'm sure we'll have lots of fun talking about what to expect from Draisaitl before he ever plays a game. Let's just hope that represents a small fraction of the enjoyment we get from watching him over the next couple of decades.