How Much Better Are The Oilers?

I think we all agree that Craig MacTavish has improved the team. How much has he improved them though?

Share All sharing options for: How Much Better Are The Oilers?

With all this dissection of the Center position concern with the team I keep wondering ultimately what is expected of the Oilers in order for this season to be considered a success? If they make playoffs thats an obvious step up and should be considered successful. But I think finishing in the 9th to 10th in the West with more competitive play just might be enough for this season as well. With the upgrades to D and W positions can this team finish in that 9-10th position even with Draisaitl and Arco taking the 2C and 3C spots? I think they can.

I spend a lot of time thinking about the Oilers, but until admiralmark posted the above comment in my post on Draisaitl last week I hadn't spent much time really thinking about where exactly I expect from the Oilers to finish in the upcoming season. My initial thought was that the team hasn't done nearly enough yet for 10th place to be a realistic target and I left it at that.

But then Lowetide asked me the same question on his radio show on Saturday and I found myself thinking about it some more. Fast forward to today and Jason Gregor's most recent post returned that same thought to the front of my mind. From his post:

The Oilers defence will have four new faces on opening night. Mark Fayne, Nikita Nikitin and either Martin Marincin/Oscar Klefbom will replace Ladislav Smid, Nick Schultz and Anton Belov while Craig Ramsay will run the D corps. Those three new faces combined with a more experienced Justin Schultz and Jeff Petry will mean an improved backend. I'm positive the Oilers will allow 40 fewer goals this season than last year.

My first reaction: 40 fewer goals is a lot; that's six plus wins from improvements in the Oilers end of the rink alone. But I do think the defence is improved, and while the goaltending plan for this season is far from a sure thing there is without a doubt room for improvement over last season, so maybe 40 fewer goals might be possible. Lets look at a few numbers and see what is reasonable to expect. I'll start with save percentage.

What the above table does is answer the question, "What if the Oilers were average?" The good news is that if the Oilers got league average goaltending next season that they would be about 20 goals better. The bad news is that last season the Oilers actually got above average goaltending when short handed, so some of the even strength gains will disappear. It's Friday though and I'm in a generous mood, so lets assume the Oilers don't lead the league in short handed goals against next season (they allowed 11 last season) and just call special teams a wash.

So the Oilers would be 20 goals better with league average goaltending. The question now becomes, "Should we expect the combination of Ben Scrivens and Viktor Fasth to be average?" Neither has a lengthy NHL history to look at, but over the courses of their careers Scrivens and Fasth have posted 5-on-5 save percentages of 0.924 and 0.917 respectively; average and slightly below. Given the relatively small samples with both I thought it might be worthwhile to look at rolling 10-game average at 5-on-5 for each to see if either is starting to trend above average. 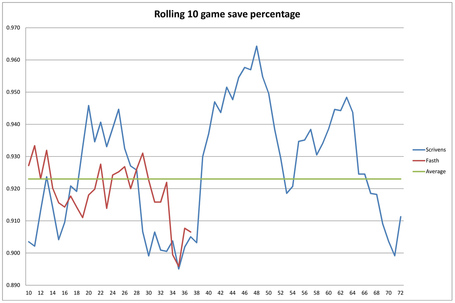 I look at that and I really want to think that Scrivens can beat average next season; at this point though the safe bet is assuming something similar to his career average. For Fasth his career average might actually be a bit optimistic. For argument's sake lets assume both have career average seasons next year, what might that look like.

And what if Scrivens posted numbers equal to last season.

Now we've at least come across a scenario where the Oilers would be in the ball park of 40 fewer goals allowed. A lot of things need to go right for this to happen though. For starters 62 games is a lot, only eight goalies played in 60 or more last season. Not to mention that 0.932 is a very good save percentage at 5-on-5. And lastly Fasth needs to play at his career average too which I'm not sure is a given. But it could happen.

In the end I think 40 fewer goals might be optimistic but not completely outside the realm of possibility. If the team adds some depth at centre (yes, that again) things will get even better. Looking at the numbers and the roster that the Oilers have right now I'd say the team will probably be about 30 goals better in their end of the rink. Strong seasons from Ryan Nugent-Hopkins and Nail Yakupov will improve things in the other end of the rink too. The problem is, they're so far behind they have a ton of improving to do just to be bad.

Altogether I think they've done enough to pass Calgary, but probably not enough to close the 21 point gap between themselves and 10th in the West. I'd say 12th. Hey, it's better than last.