There are, however, some systemic problems with this method. For example, the NHL equivalency for the AHL is usually stated as being 0.44, which means that players moving from the AHL to the NHL retain, on average, 44% of their point production. However, a few years ago I wrote about how difficult it is for players to maintain their NHL equivalency year over over when moving from the CHL or the NCAA to the AHL. Since I've the data for that handy, here's how players drafted in 2008 did moving from those leagues in 2009-10 to the AHL in 2010-11: 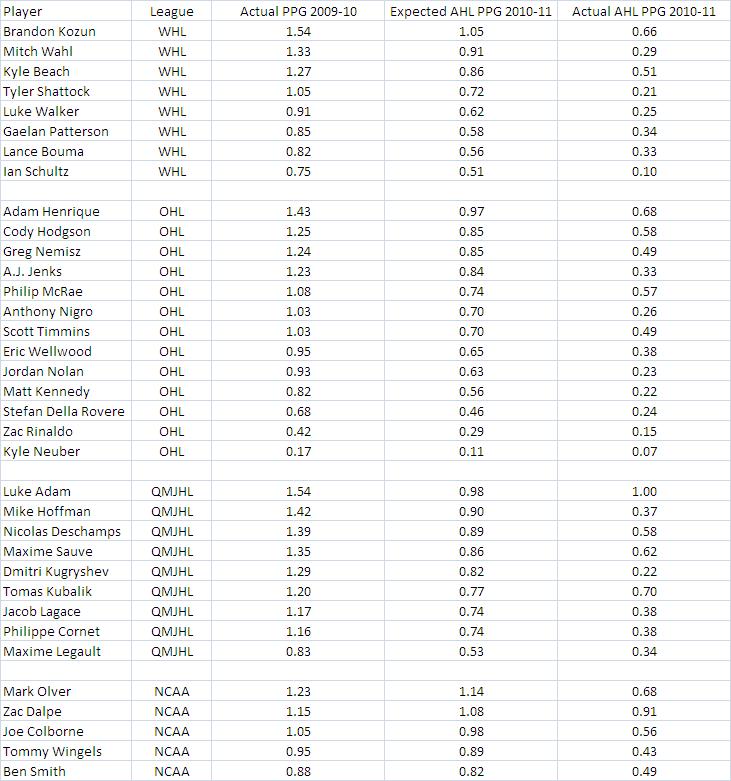 You'll notice that all but one saw their NHL equivalency go down even though the player was a year older and thus probably more ready for the NHL than he had been at the lower level. At the time I concluded that by only considering those players who make it to the NHL, the NHL equivalencies paint a rosier picture for marginal prospects than is warranted. I stand by that finding, but reflecting on that recently also got me wondering about whether the same is true at the other end of the spectrum. Do the standard NHL equivalencies systematically underrate the very best players? I think it's quite likely that they do.

In the chart below, I've gathered all of the players who were chosen with one of the top fifty picks in their first year of eligibility from 2005 to 2013 who moved directly from the CHL to the NHL (the comparison is of the player's last junior season to his first NHL season with a minimum of 40 GP in the NHL season). Both the CHL and NHL points per game have been adjusted; for the CHL, they've been adjusted to a league that scores 6.8 goals per game, and for the NHL, to a league that scores 5.4 goals per game: 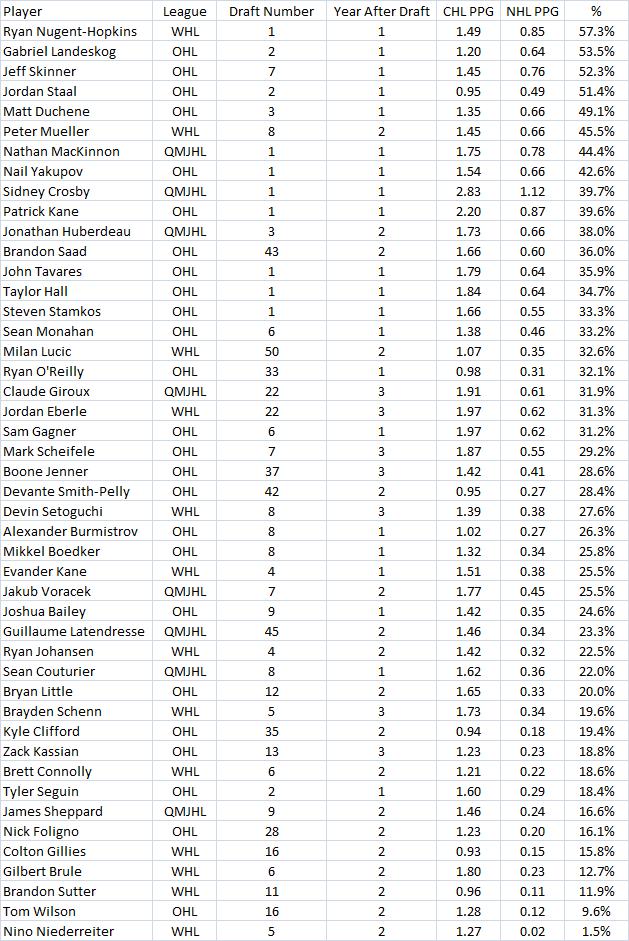 The average is 29.4% and the median is 28.5%, both of which are very close to the standard equivalency numbers used for various CHL leagues (usually 0.30 for the OHL and WHL and 0.28 for the QMJHL). But even a cursory look at the chart above should lead you to recognize age as an obvious factor. If we look only at the players who came to the NHL immediately after being drafted, the equivalency is substantially higher: 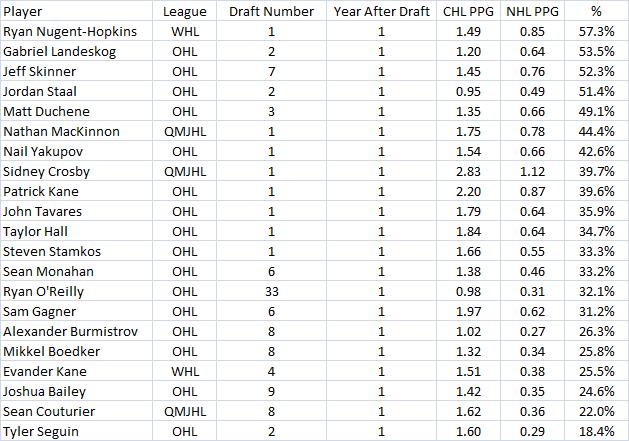 In this case the average is 36.8% and the median is 34.7%. That makes the average just 23.2% for players who came to the NHL from the CHL in their second or third season after being drafted. It's a sizeable gap, and something that needs to be taken into consideration. But age isn't the only factor. It doesn't take much study of the chart to see that draft position seems to be having an impact here. If we look only at the players taken first, second or third overall, the equivalency is higher still:

The average is now up to 41.7% and the median up to 41.2%. Those who were picked fourth overall or lower see their NHL equivalency drop to an average of 30.3%. A first or second overall pick should thus probably be expected to retain more of his offense than those taken later in the draft.

This accounts for basically all of the difference between the observed difference between the OHL and the other junior leagues in recent seasons. The OHL is hugely over-represented when it comes to players taken with the first three picks in the draft, and those same players represent a rather large percentage of all OHL players who transition from the OHL to the NHL. As a result, it might seem like the OHL as a whole has a stronger equivalency. We can see that this isn't the case if we look at players who moved from the various junior leagues to the NHL in their second or third season after being drafted: 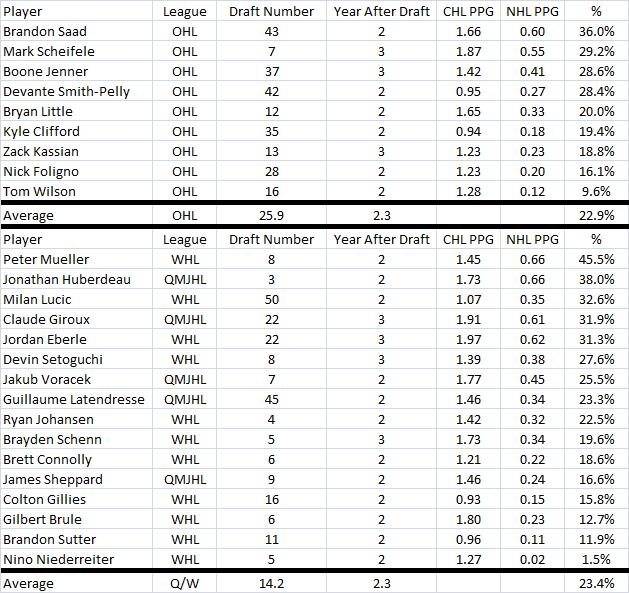 As you can see, the average is actually a touch higher for the combined WHL and QMJHL players than it is for the OHL players, though the difference isn't significant, and if there is any real difference (it may be tempting to discard Niederreiter's ridiculous rookie season), it may well be best explained by the WHL/QMJHL advantage in draft position.

All of this is of particular interest to Oiler fans because of Leon Draisaitl. Given that he was drafted out of the WHL, I think it's important to recognize that what he accomplished there offensively is every bit as impressive as what another player (say, Samuel Bennett) accomplished in the OHL. Furthermore, it's good to know that if Draisaitl returns to the WHL (it's the Oilers so it's unlikely, but hey, anything is Pospisil), running in place as a prospect will require him to improve his scoring substantially at the WHL level.

Edit: An earlier version of this article concluded: "But perhaps the most interesting thing this analysis raises with regard to Draisaitl is whether we should expect him to behave like the players drafted first or second overall or instead more like the players who were drafted fourth or later. With no third overall picks being forwards out of the CHL who came directly to the NHL from 2005 to 2013, it's an important but unanswerable question. Let's hope Draisaitl treats us to an answer that both he and we will appreciate." Given that Matt Duchene was selected third overall, that conclusion isn't the most accurate thing I've ever written. On the bright side, Duchene carried a very large percentage of his offense with him to the NHL (49.1%), and while a sample size of one certainly isn't enough to draw strong conclusions, it does provide a slightly more hopeful picture.