It took five days but the Oilers finally got Nikitin's name on a contract.

Share All sharing options for: Nikita Nikitin Signs In Edmonton

#Oilers acquire the rights to defenceman Nikita Nikitin from @BlueJacketsNHL in exchange for a 5th-round pick in the 2014 #NHLDraft.

It took five days but the Oilers finally got Nikita Nikitin's name on a contract. Since news broke last Friday that the Oilers had been given permission to talk with the former Blue Jackets defender and soon to be unrestricted free agent, fans in Edmonton had speculated if a deal would get done and what that deal might look like. This morning we know the answer. Two years at an average of $4.5M.

Free agents get overpaid, we know that. And the Oilers, as a result of eight years of failure and ineptitude, also tend to have to overpay to get players to come here. That's the reality of the situation. This is a big overpayment though. Nikitin is probably best suited to be a 4/5 defender, a player similar to Andrew Ference who the Oilers signed to a bad free agent contract last summer. In reality anything north of $3M is bordering on too much, $4.5M is bordering on crazy. The saving grace here is that the terms is short, so it at least won't be a deal that will cripple the Oilers as it comes to an end. 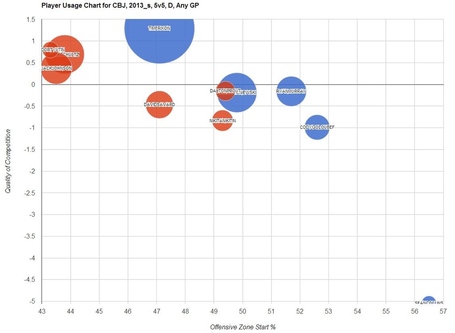 Looking at his possession numbers, they're okay. He didn't play the toughest minutes, but he generally kept his head above water. That's not what I'd pay $9M over two seasons for but I'm not the GM. Hopefully for the Oilers and their fans he can keep doing what he's been doing and maybe eve a little more over the next couple of seasons.