Would Anton Stralman Be A Fit For The Oilers?

As MacTavish tries to rebuild the Oilers defence is Anton Stralman a guy who he should be looking at?

Share All sharing options for: Would Anton Stralman Be A Fit For The Oilers?

Now that the Stanley Cup has been awarded to the Los Angeles Kings fans around the NHL can start doing what fans in Edmonton have been doing since early November, looking ahead to next season. This summer the offseason starts first with the compliance buyout period which started yesterday, that is then followed by the Entry Draft, and then finally we get to free agency where the biggest moves tend to be made. To say the least, a lot of things will be happening around the NHL over the next two and a half weeks.

When the dust settles after the first few days of free agency fans of the Oilers are hoping that their team will have done something significant to help reshape the team's defence from the mess that it was last season, turning them into a group that isn't overmatched against even the weakest NHL opponent. If you followed the Oilers closely last season (or watched more than five games) you probably know that this won't be an easy task for Craig MacTavish.

By my estimation he needs to find two players capable of playing on the top team's top four. Jeff Petry can play on the first unit and Justin Schultz on the second, but after those two there isn't much left.  If MacTavish can't find the players needed to fill those holes then he'll be left depending on a player like Martin Marincin - who looked good in 44 games last season but still needs time to develop his game at the NHL level - to fill the role. It probably also means that one of Oscar Klefbom or Darnell Nurse will be on the roster in October. I don't have a crystal ball so that's something that might workout for the Oilers, or it might just as easily blow up in their face leaving them in the same spot they were last season, up a creek and lacking a paddle.

In discussion with Terry Jones over the weekend MacTavish touched on the defence and it seems like he and I are on the same page right now. From the Edmonton Sun:

"We need help on defence. We’re looking for a puck-moving defenceman, a guy who can carry the puck north and continue into open ice."

This acquisition, he admits, is almost certainly going to have to come through trade.

"We also need a defending defenceman. We’re not going to compromise our young prospects on defence," he said of forcing the likes of Darnell Nurse, Oscar Klefbom, Martin Marincin, etc. into the line-up until they are ready.

"We’d rather they played in the American Hockey League or junior."

For more on MacTavish's plans with the defence I would suggest reading what Jonathan Willis had to say on the subject at Cult of Hockey, as always, it's worth reading. Willis suggests, and I agree with his logic, that the puck mover is more likely to come via trade and the "defending defenceman" is more likely to come by way of free agency. But pans can change quickly as players sign new deals so it's worth considering all your options. One of those options that's been get attention of late in Edmonton and is set to become a free agent is Anton Stralman. Would he be a fit for the Oilers?

He certainly wouldn't fit the mould of defensive defenceman. At 5'11" and 190lbs he's not a band and crash type guy; if you're looking for another Matt Greene (aside: please MacTavish don't sign Matt Greene) he's not the guy you're looking for. But he's an intriguing player nonetheless. For me, a big part of that comes from his counting numbers compared to his possession numbers. Over the last two seasons he's scored just five goals and 20 points in 129 games. That's Matt Green like production. Where Stralman separates himself from a player like Greene is in terms of possession. Over the last three seasons Stralman has had one of the strongest Corsi percentages of any defenceman in the NHL.

For my money, if my team generates 55% of the shots and scores 56% of the goals with Player X on the ice I don't particularly care if that player racks up points or not.

For a lot of people in and around the NHL it's goals and assists are what make the world go 'round.For my money though, if my team generates 55% of the shots and scores 56% of the goals - both true of Stralman over the last three seasons - with Player X on the ice I don't particularly care if that player racks up points or not. Especially if the player we're talking about is a defenceman, who, as I understand the job description at least, is tasked with helping keep the puck out more than worry about putting it in at the other end of the rink. The bottom line is my team comes out ahead when he's on the ice and that's a good thing.

Stralman obviously isn't the only player on the ice though, there are four other guys other there as well, so how much of that performance can be attributed to him and how much is a product of who he's playing with. While we can't say for sure either way, a look at his with or without you numbers can help shed some light on this. The table below is taken from stats.hockeyanalysis.com and contains all the position players Stralman has played at least 300 even strength five-on-five minutes with over the last three seasons.

There are a couple things that jump out at me when I look at this chart. At first glance you notice that everybody does better with Stralman on the ice than without him. That's a point in the pro Stralman column. But to me the really telling number is the without Stralman percentage of Marc Staal. In almost identical time with and without him, his most common defensive partner falls off a cliff when paired with anyone else. Some of the drop off could be attributed to tougher assignments and/or zone starts but I doubt those would account for the nearly eight percent drop, some of that has to be the result of strong play coming from Stralman himself.

Clearly he's a very good hockey player, can he handle top line minutes though? Again, I think the answer is yes. He didn't quite average 20 minutes a night last season which would be considered low by some, but included in his per game total was just 16 seconds of power play time (part of the reason he scored that single goal last season), so his minutes are real minutes. Could a team get another two or three out him on a nightly basis? At 36 I'd say no, but at 26 I don't see why not. For an idea of the type of minutes he played you can look at his usage chart. Not the easiest on the team, not the toughest either, but he killed it when he was on the ice. Like everything else it's another mark in the pro column. 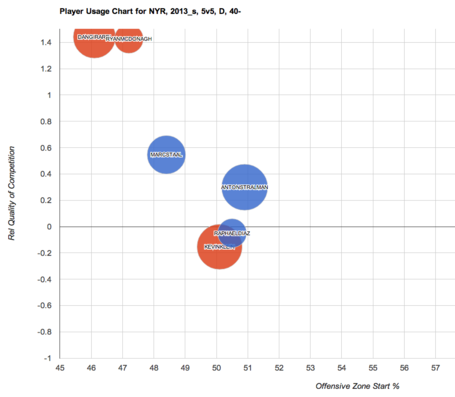 Of course it'd be great to go out on the first day of free agency and come away with a player who is a lock to be a star for the next five or six years. Those guys cost huge dollars though, and, more importantly, that player simply isn't available this summer. So anyone MacTavish brings in is going to come with some question marks. Looking at the numbers though, not to mention his pay in the Stanley Cup, I tend to think that if the Oilers could get his name on a deal for anything under $5M annually for five or six seasons it would have the potential to be a real honest to goodness value contract for a team that can barely knows what a value contract is. The risk is certainly worth the risk as far as I'm concerned.

If Stralman had put up 35 points this season there would be a bidding war for his services and that kind of deal wouldn't come close to being good enough to bring him to Edmonton. But luckily for the Oilers he didn't score 35 points, he scored 13 and that's the kind of thing that could keep his contract value down. Coming off a strong playoff performance anything is possible in free agency, but NHL General Managers like tend to like goals and assists in free agency, and if they stay true to form the Oilers could find a real steal in Stralman. At the very least he's a guy that they need to kick the tires on.