With the draft approaching, the Edmonton Oilers are going to have a very interesting situation on their hands if Aaron Ekblad isn't available to them. The other best prospects are centers, and they're all very good. On most teams, they'd be tabbed as a team's future number one center.With the Oilers, there's already a young first overall pick in place, which would make for some very interesting competition for years to come.

Ryan Nugent-Hopkins has moved up on this list since the summer, which is a difficult thing to do so close to the top of the rankings. In the summer, he was as low as fifth on a couple of lists, and no one had him getting top billing, so his move here is a big one. Unfortunately, he moves up mostly because, among others, Nail Yakupov has struggled relative to expectations. I'd love to say that Nugent-Hopkins has moved up because of some kind of otherworldly performance this season, but that's just not the case.

In fact, I'd say that this season could probably be classified as disappointing. After taking on some tougher assignments under Ralph Krueger a year ago, Nugent-Hopkins has received a zone-start push similar to his rookie year this season with 58.3% of his end-zone starts coming in the offensive zone during five-on-five play. Unfortunately, that hasn't translated into more offense. Although he has more goals this year than last, his shot rate is actually identical to last season at 5.9 shots per sixty minutes of five-on-five play and well back of his rookie rate of 7.1; his shot attempt rate is also down from 13.1 per sixy minutes of five-on-five play in his rookie year and 10.8 last year to 10.0 this season.

His line has also been far less effective this season. Whereas last year the Oilers were nearly breaking even in terms of shot attempts with Nugent-Hopkins on the ice (49.9% and 46.3% with the score tied), they've taken a huge step back this season (45.1% and 42.7% with the score tied) even though Nugent-Hopkins has been playing in more favorable situations. Some of those problems could be system-oriented, but it looks to me like Nugent-Hopkins has taken a step back from where he was last season.

That's the bad news. The good news is that Nugent-Hopkins is only now finishing his entry-level contract. There's plenty of time to improve, and while this season isn't the step forward I might have hoped for, Ryan Nugent-Hopkins is still performing at a very high level relative to some of the comparables identified when he was drafted. I've redone that list of comparables a little, looking for CHL players with between 80% and 120% of Nugent-Hopkins' draft year goal production and 90% and 110% of his point production after adjusting the offense to 6.8 goals per game. All comparables also needed to be top ten picks going back as far as 1983. It's very similar to the list in the story linked above, but here's the chart: 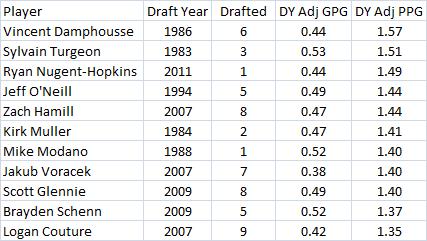 There are some scary names on that list, and Nugent-Hopkins has clearly left them in his wake, which is excellent. There are also some excellent players on that list, players who were the best center on teams that won the Stanley Cup, and so far, Nugent-Hopkins is outpacing all of them in terms of adjusted offense (I've adjusted this to a league with 6.0 goals per game):

It's clear from the chart above that Nugent-Hopkins' rookie season was well beyond what could have been expected based on his junior performance, but he hasn't maintained that huge lead on the group over the next couple of seasons. Still, he's out in front of some very good offensive players (Note: Sylvain Turgeon was tracking really well until suffering an abdominal injury that he never really recovered from in the middle of his fourth season). If he can find a way to get back on track in terms of helping to drive possession against tough competition, that's very encouraging indeed.