"'Who are you?' Dallas said. And so I told him, 'I am one who cheers for the Oilers.' Then the coach of the team looked right at me and said, 'Put me out of my misery. This experience has been nothing but pain all day long and I want to be fired.' So I started chanting for his head and I threw my jersey to the ice and many others joined me in this for we all knew that he couldn't go on. We made it impossible for him to keep his job, and now we have brought the situation to you, Mr. MacTavish, so that you might decide what's best." 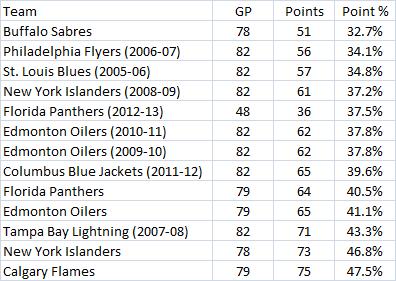 Visiting Team Scouting Report: The Colorado Avalanche are heading to the playoffs on the strength of very strong percentages. Their Fenwick percentage with the score tied during five-on-five play is 25th in the NHL at 47.0%. The other teams among the top six in the West? 1st, 2nd, 3rd, 7th, and 19th. They're making up for the lack of possession with great goaltending (.936 in those situations is third best in the NHL) and excellent shooting (8.3% puts them sixth). It probably won't be enough for them to overcome three really good teams to get through the Western Conference, but the playoffs are always fun, and I'm sure their fans will enjoy it. I know that I'd take a percentage-fueled winner right about now.