Steve Tambellini Wins in All the Wrong Ways

Share All sharing options for: Steve Tambellini Wins in All the Wrong Ways

Almost out of the picture. Seems a fitting choice for Steve Tambellini's relationship with the Oilers today. His influence, both good and bad, continues to be felt throughout the organization. Taylor Hall's contract will pay dividends for years to come, as will (probably) the signing of Justin Schultz and his reluctance to sign really lengthy deals with aging players. The negative impact is there as well, of course. The decimation of the defense, the horror of the bottom six forwards, the lack of depth in goal. Steve Tambellini isn't here anymore, but his time as general manager will continue to be felt for at least a decade to come.

It's amazing to me how far he's fallen. The man lost in the quarterfinals of the "Worst GM" version of this tournament just two years ago. His presence in that tournament suggests a lot of discontent already present, but I think he'd likely be a finalist and possibly a winner if we were to run that version again. The continued failure of the Oilers over the last two seasons has further cemented his reputation as a failure, though that might come with an asterisk in future years. If Taylor Hall helps the Oilers to a Stanley Cup, I think we might look back on Tambellini as a necessary evil.

One of the most interesting things since Tambellini's departure is his silence. He must know that he isn't held in high esteem, but he hasn't tried to defend his tenure and certainly hasn't gone out of his way to disparage the Oilers since his departure. He caught on as a pro scout with the Anaheim Ducks earlier this season, so we know that he's working in the game, but that's about it. Seems like a humble guy who knows that talking will do him no good.

I'm honestly surprised by the outcome of this version of the Not-So-Sweet Sixteen. Steve Tambellini didn't do a good job, but I still have a lot of hope for the future of this team, in large part because of his acquisitions. If Steve Tambellini is the Worst Oiler Ever (and given that we just voted on it...) then this is a pretty darn good team to cheer for. 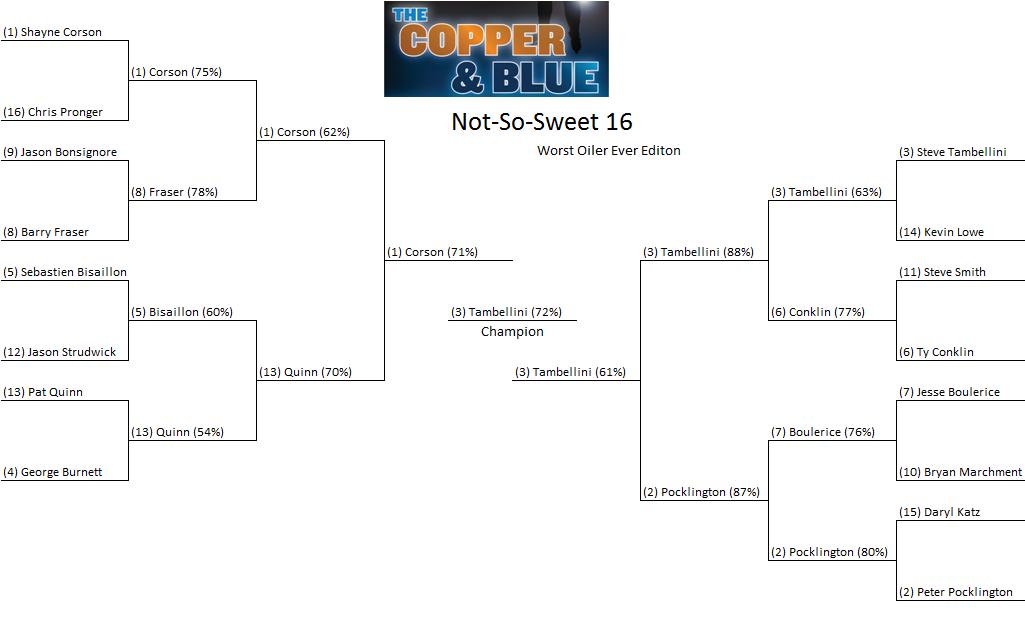