The weekend saw Steve Tambellini overcome his toughest challenge yet, but he eventually overcame Peter Pocklington with 61% of the vote to advance to today's final. His opponent here, top seed Shayne Corson, is widely regarded as the worst captain in the history of the Edmonton Oilers. The winner, whoever it may be, will have earned his place. That said, I'll be voting for Corson and I'll tell you why below.

His bumbling ways led the Oilers to the basement and his stammering interviews didn't earn him any respect, but is Steve Tambellini really the worst Oiler ever? He wasn't even the worst general manager of the previous salary cap era! Steve Tambellini certainly wasn't a good general manager, but I think it's important for us to recall that when he arrived in Edmonton, he didn't inherit a great situation. His boss and his coach were very good friends, but Tambellini still had the guts to send Craig MacTavish packing. He inherited a bunch of poor contracts to (beloved) aging veterans (Staios, Moreau, Pisani, Horcoff) whose best days were behind them and the prospect pool wasn't anything to write home about. When Tambellini saw that adding a veteran coach and veteran goalie wasn't about to get this team over the hump, he mortgaged the present instead of the future, a move for which he probably receives too little credit. The Oilers didn't need to finish last in 2009-10. They did because Steve Tambellini decided to ignore obvious need and accept the highest pick in the land. The rebuilding process lasted too long, and Tambellini deservedly lost his job because of it, but the man also made some very good big picture decisions early in his tenure that will serve the Oilers well for years to come.

This guy made no such good big picture decisions. He fought with players, fought with coaches, fought with opponents (often outside the rules resulting in delightful penalty killing situations). He epitomized the directionless nature of the Oilers during his entire tenure with the team, which included three of the worst seasons in the team's history, including the first time the team missed the playoffs, and the first time a coach lost his job because of a public fight with his captain. Shayne Corson arrived in the first season that the Oilers were ever truly bad and when he left, it was clear that the sun was getting ready to shine. 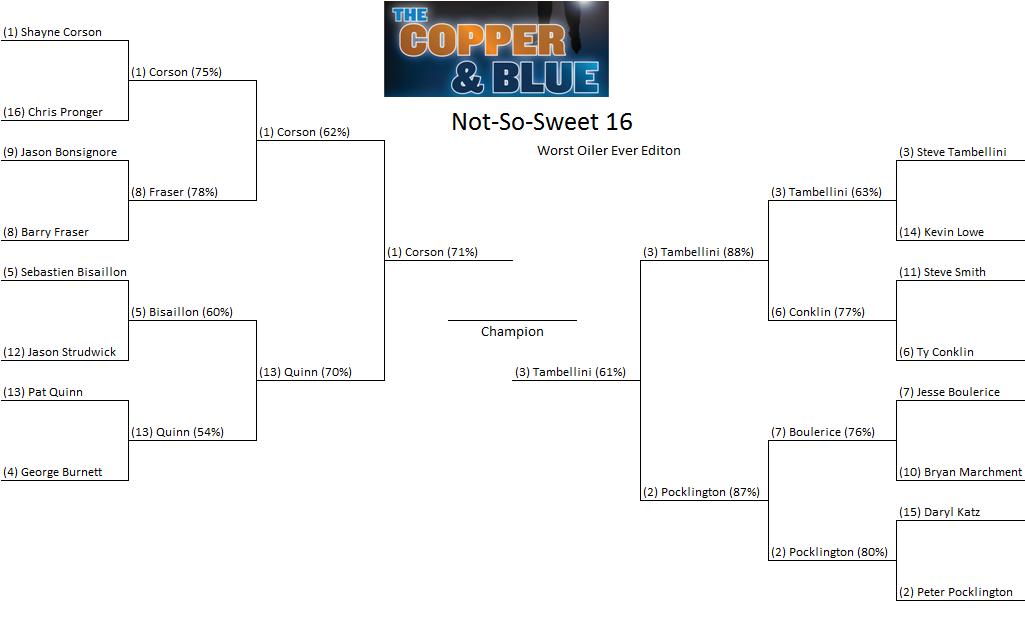