To the MSM, he's a riddle wrapped in an enigma, but he's annexed the blogosphere's hearts.

At some point in every player's career he's made the leap from unproven prospect to proven NHL commodity. When I participate in these rankings, if I'm ranking someone above someone else, I always ask whether I'd accept a trade receiving the higher player for the lower player straight up. I'll admit, this was probably the hardest ranking decision I made, putting Nail Yakupov at number 3 while leaving Eberle at 4. Would you do a trade of Eberle for Yakupov, straight up? At this very moment, I still would. But if Yakupov has another underwhelming year under his belt at this time next season, that calculation could change. Yakupov's at the point in his career where production should be expected.

On the face of it, it seems a rather silly proposition. Jordan Eberle is a top quality NHL player, I don't there can be much argument about that. Putting up a 75 point season in your entry level contract under the age of 23 is quite a feat, as this list from hockey reference can attest since 2007-08. 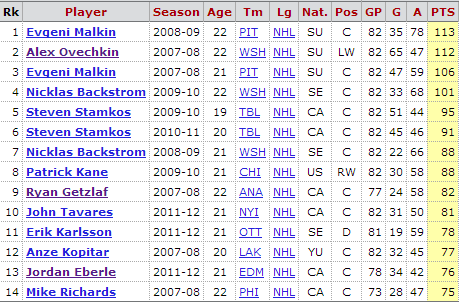 Of course, many things went many right for Eberle in that season, but it's hard to quibble with a guy who already has an elite season under his belt.

Yakupov, as anyone is well aware, is a lazy, enigmatic, cocky, complaining, entitled, offensively obsessed, individualistic, team-destroying Russian whose only real accomplishment was leading his team in goal scoring in his rookie season with 2 other first overall draft choices and that very same Eberle on the same team. Oh, right, that.

There is really no other way of putting it: Yakupov's had a tough season, along with most every other Oiler not named Taylor Hall. One thing that's separated Yakupov from his peers is how wildly variable his deployment has been this season in terms of line and position. How exactly has he been used, and what has his performance been?

Yakupov's spent at least 8 games on every line. He's filled in for Taylor Hall on the first line, he's played with Hall on the top RW spot, he's spent the bulk of his season on the 2nd line playing with the others unlucky enough not to get on Hall's ticket, he's spent time on the 3rd line with Arco, Gordon, and Perron, and he's even spent time in the coach's doghouse alongside Gazdic and Smytty on the 4th line. He's a real nowhere man.

In those dog's brunch of minutes, his performance has also wavered significantly. In terms of Corsi, he's seemed to do better on the left wing this season. When looking at the line's he's played on, he's done better on Gordon's right side on the 3rd line and while playing on the top line.

If we look at my current expected goal model (which tries to weight shots taken based on location and type), his first line score improves dramatically from looking just at Corsi%, from 47.3% to 52.9%. This implies that when he's on the first line he's creating quality scoring chances over and above what you'd expect by just looking at Corsi. But for whatever reason, his numbers completely crater when he plays on the 2nd line, usually with Gagner, but also with RNH and Arcobello as centremen.

Here's a way to show Yakupov's season game by game, contrasting his Corsi% for each game and which line he was playing on: 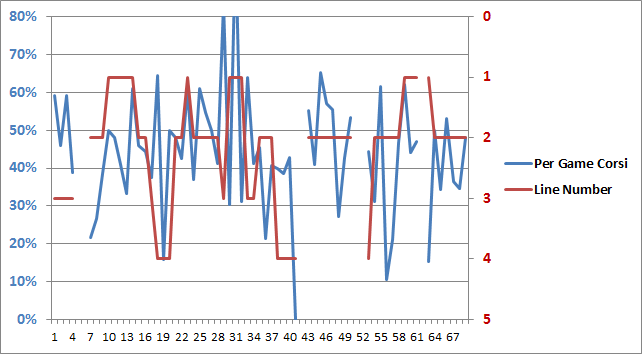 Generally it seems like the two move in fairly apparent lockstep, where his overall numbers have unduly been harmed by spending time on the 4th line, whereas players like Eberle, Perron, and Hall haven't had to lug Gazdic around very much. Most of his first line time has been productive or at least within spitting distance of 50%.

There's also been a lot of question as to whether Yakupov struggles not just with top players, but versus top competition. The media would make it seems like Yakupov gets taken apart against good competition. This simply is not true. Here are the Oilers' top 4 (remaining) wingers by their average Corsi% vs each opponent line for the entire season:

Against the league's best players Yakupov has better numbers than Taylor Hall and Jordan Eberle this season, at a 46% vs their marks of 42% and 45%, respectively. He does seem to struggle versus teams' second lines, well back of the pack at 41%. It should also be pointed out that he ties for the best Corsi% versus teams' best defensive pairing, tying Eberle with a 46% average.

The other really important thing to remember is that Yakupov's also gotten the serious short end of the goaltending stick, so much so that it's fueled a lot of those lazy stereotypes that your local newspaperman loves to harp on. He's got the infamous -33 plus/minus mark, which stupid people accept without context as meaningful, such as:

Minus-35 is either the temperature in Edmonton or Nail Yakupov's plus-minus.

But what the news borgs didn't realize was that Yakupov has the league's 2nd worst on-ice save percentage. His goalies only save 88.2% of shots at 5 on 5 while he's on the ice. Doing some grade 3 arithmetic can help provide the context. He's been on the ice for 424 shots on net against this year, and 50 goals against. If his goalies saved 92.0% of shots instead of 88.2%, he'd have only been on the ice for 34 goals against, or 16 less. Also, his on-ice shooting percentage is only 7.5%, no doubt impacted by his time on the 3rd and 4th lines. The Oilers best players flirt with 10% on-ice shooting, but let's assume he could have done 8.7% playing only with top six players. His on-ice goals for would have increased from 26 to 30. So in a fair world, Yakupov's plus-minus could have very easily been -4 this year at evens, instead of -24. Since he doesn't kill penalties, including the minuses he gets from being on the PP (which has been catastrophically bad at giving up short handed chances this year) is unfair.

Yes, he hasn't blown up this year like many of us hoped he would. He's got top 5 NHL shooting talent, and could not seem to find many looks to get that cannon fired. He also happened to get Vesa Toskala level goaltending for an entire season.

I'd agree that he's on the clock at this point. Another sub-20 goal campaign next year will undoubtedly see him fall another spot or two in these rankings. All I'm saying is that you'd be foolish to bet on him having a similar season to this one next year.