O how the games have lost their luster!
Even divisional rivalries have become dull.
Once precious tickets are now scattered in the streets.
Our heroes wearing the Oildrop, once idolized,
practically worth their weight in gold,
are now scorned by their own fans. 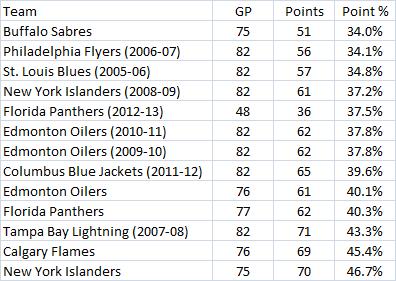 Visiting Team Scouting Report: The Oilers just played Anaheim last Friday, and so I just wrote a little bit about how the Ducks have achieved success so far this season. As such, I thought it might be fun to talk some about the success of Corey Perry and Ryan Getzlaf. Both players are having excellent seasons, and stand first and second in goals, assists, points, shots, time on ice among forwards, penalty differential (drawn minus taken), and plus/minus. Getzlaf is actually second in the league scoring race behind only Sidney Crosby. They're not doing it with cherry minutes either, as both players have a pretty balanced zone-start ratio, and they're obviously seeing a lot of the opposition's best defensive players. There are parts of Anaheim's success this year that don't look sustainable, but their top line is bonafide.