As if there was ever any doubt.

I'm sure you've been coming to the Copper & Blue for weeks now anxiously awaiting the conclusion of the Top 25 Under 25. Repeatedly refreshing the front page and yelling, "When will these idiots finish this series! Who is going to land in the number one slot?" Oh how suspenseful it must have been. Day after day of waiting and wondering. Well dear reader, the wait is over, the player chosen by our esteemed panel of judges as the best Oiler under the age of 25 is none other than Taylor Hall. As if it could have been anyone else.

As usual the vote is nearly unanimous, and unlike some of our other rankings I would imagine that this one reflects the opinion of the masses as well. With the Oilers rarely do the fans in this town agree on anything, but when it comes to Taylor Hall we all seem to be in agreement that he's the very best we've got. It's nice that for once we can all sit down, have a nice friendly conversation, and reach a general consensus on a player. It's just too bad that the player happens to be a second line flop.

Someday the idea of Hall being a second line flop might not be funny, that day is not today.

The 2013/14 season, Hall's fourth in the NHL, was another solid campaign for the player whose selection kicked off the Oilers second rebuild. With 27 goals and 53 assists, Hall finished tied for sixth in league scoring. Those 80 points are the most by Oiler since Doug Weight scored 90 in 2000/01. For my money he's the Oilers most exciting player right now, and it's really not even close. He's the guy who makes this team go, and if management can find a few more bodies to help him he should be able to take the team to some very exciting places.

But even though Hall's count numbers were fantastic there is some cause for concern in his possession numbers. Hall finished the season eighth among Oilers forwards in CF% with a season total of 44.4%, not a good number from a player who did better than the break even point just a season earlier. The discrepancy between Hall's point total and his Corsi is quite interesting, something was definitely amiss with the Oilers when Hall was on the ice this season, but the good news is that things seemed to be trending in a better direction by the end of the season. 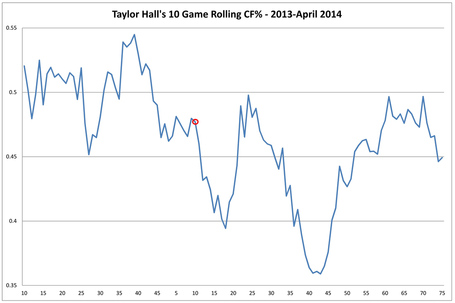 The red circle indicates is the tenth game of this season, and it's pretty clear from that graph that something changed over the summer. My guess is that the coaches were looking for something from Hall's line that just was not working, but whatever the reason, you can see that over the last 25 games that Hall's Corsi started to correct itself. He still wasn't quite where I'd like him to be, or where the Oilers need him to be, but valley around Game 40 I'll take whatever I can get.

If there is a complaint that I have about Hall it's that he needs to be better in the Oilers end of the rink. He and just about everyone else wearing an Oilers jersey. He's young though and having played for three coaches in four seasons isn't going to help a kid learning on the fly in the NHL. There are a great many things I question about the Oilers, if Hall will figure out his own end of the rink isn't one of them. And when he does figure it out he'll make the jump from star to superstar.

Or second line flop, whatever you prefer.