When the Sabres heard that Edmonton had been anointed masters of tanking, they resolved to strengthen their position at the bottom of the standings. MacTavish saw this ploy and scoffed, but the Sabres went on to lose fifteen of seventeen games in order to guarantee themselves their position as the worst team of the last decade. So MacTavish came to God and said, "The Sabres are too bad, even for us. Will you at least give the lottery into our hands to ease our suffering?" God replied, "Yes. Do not worry. I will deliver the lottery into your hands." 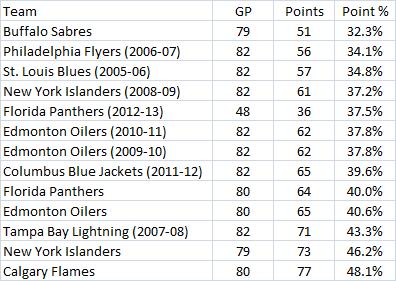 Visiting Team Scouting Report: The Los Angeles Kings are on their way to the playoffs, and will play in what should be one of the best series of the first round against San Jose. Both teams are excellent at controlling the flow of play, with L.A. currently first and San Jose currently fourth in Fenwick percentage with the score tied. The Kings have had better goaltending this season, but the Sharks have been better on special teams. Of the sixteen teams to get in, both are probably among the top six in the league. It's a very tough match-up for the first round, but it should be very exciting to watch.