Shots Throughout The Kevin Lowe Era

Have you ever wondered about the Oilers shot differential during the Kevin Lowe era? Of course you have.

Share All sharing options for: Shots Throughout The Kevin Lowe Era

This afternoon I saw an interesting tweet from @JaspersRink which included a graph showing the Capitals cumulative shot differential during George McPhee's time as the team's General Manager, to show the effects of each coach, their respective periods behind the Caps bench were also identified. This inspired me to create a similar graph showing the last eight seasons of Oilers hockey. As you can probably imagine the graph was ugly looking, basically a constant decline since the beginning of the 2006/07 season. I didn't break out the tenures of the five different Oilers coaches during this stretch because the team, more or less, sucked equally under all of them.

But the more I thought about it, the more I thought it might be fun to add a few more years to that graph. Instead of restricting it to the last eight years and getting a predictable graph that's equal parts sad and hilarious, I could get something that demonstrates how the Oilers have evolved during Kevin Lowe's time in the Oilers' front office. I don't think Lowe is the person most to blame for the current state of the Oilers, but he is the one constant over the last eight years and has been in a front office position since taking over as the team's General Manager in the summer of 2000, so it seemed logical to look at the entirety of the Kevin Lowe era (regular season games only). 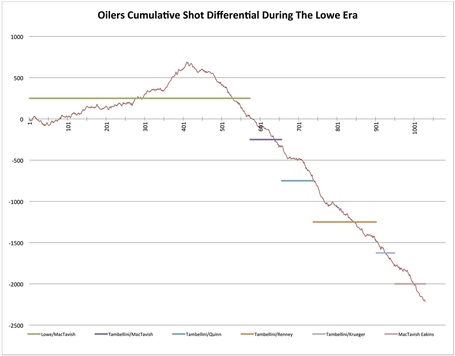 Seeing how the graph turned out I'm pretty happy that I did this. The Oilers shot differential during the Kevin Lowe era peaked at +691 on April 17, 2006, the last regular season game the team played before their magical two month trip to Game 7 of the Stanley Cup Final. And it's been all downhill since that point. You can't make this stuff up.

A couple of other notes: