Shayne Corson helped to justify his top seed by moving through Barry Fraser and into the semifinals in yesterday's vote. Today we've got two more people vying for a spot in the semi-finals, both of whom were only here for a short time, but created plenty of unpleasant memories. Before you vote, I'll give a brief defense of each of the participants.

Ty Conklin's presence in this tournament is all about at most one season, and more realistically, one moment. He played four games for the Oilers in 2001-02, and had a save percentage of .939, winning his only two starts. He spent all of 2002-03 in the minors, and then emerged as the team's starting goalie in 2003-04. His save percentage that year was .912, one point higher than the league average of .911. Then the 2005-06 season happened. He suffered a groin injury in camp, and though he tried to play through it, he was brutal in four October games. The club sent him to the minors, then rested him for a while, but when he returned in December, things still weren't better. In the end, Conklin started just fifteen games for the Oilers that season. He was awful, but a team can (and did!) recover from fifteen games of sub-par goaltending. Then he appeared in one playoff game. This wasn't really his fault. If Craig MacTavish felt that Jussi Markkanen was the better goalie (and he clearly did), he should have had Markkanen on the bench for every game, not Conklin. And the blame for the miscommunication behind the net really should all be on Conklin. And the Oilers had a three-goal lead in that game that they blew without any of Conklin's help. That loss just can't be pinned on one guy. And if that's the case, it seems clear that Ty Conklin really wasn't that bad.

Steve Tambellini wasn't a good general manager. Not at all. He is one of the primary causes of this team cratering, and that's a fact. But what would this team look like if he was a decent manager? Would they have this much young talent? Certainly not. Would they be challenging for a Stanley Cup? Almost certainly not. They'd most likely be in the mushy middle, challenging for a playoff spot but not among the league's ten best teams, and stuck in that cycle for a long time to come. That's not bad, exactly. I had a lot of fun cheering for the Oilers in the late 90s and early 00s, but this team will one day be a lot of fun to cheer for, and that wouldn't be possible without Tambellini's incompetence. I guess what I'm saying is that the Steve Tambellini years were painful, but may ultimately serve the team well in the long term. When we look at things in that way, it seems clear that Steve Tambellini really wasn't that bad. 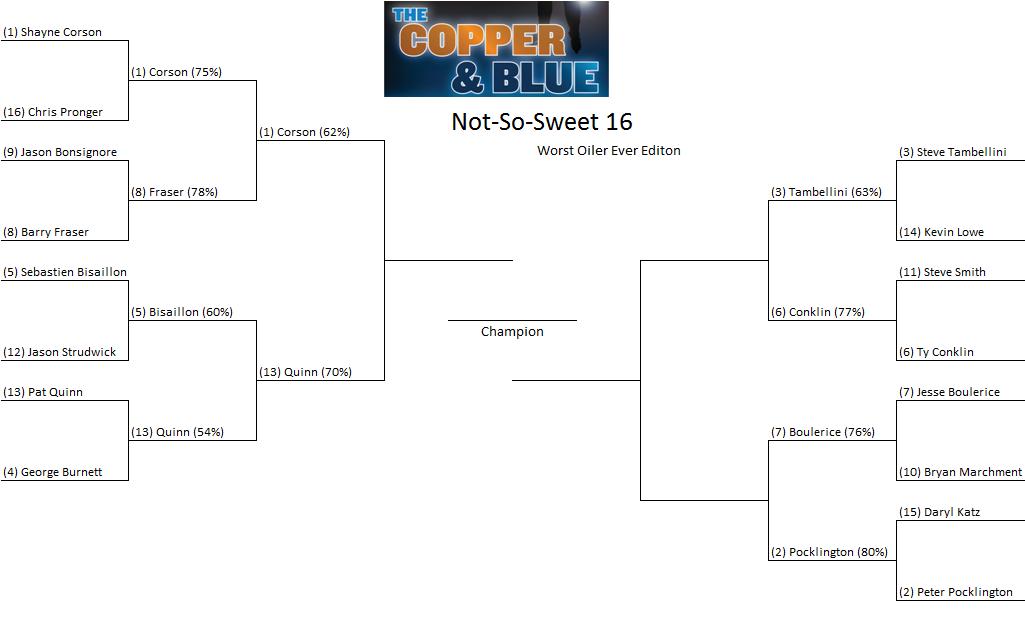