In the comments to yesterday's post, Doogie pointed out that whether it was Sebastien Bisaillon who advanced or Pat Quinn, neither would be a contender long-term. Quinn, the 13th seed, won with 70% of the vote. I'd like to agree with Doogie that Quinn isn't going to win this whole thing, but with two upset victories so far, I'm not ready to rule out a finals appearance completely. His opponent in the semi-finals will be determined today after I give a brief defense of each of the participants.

Barry Fraser isn't even the worst scouting director in Oilers' history if we take quality and not just quantity into account. How many scouting directors have drafted five Hall of Famers? And how many did it without a top five pick? I'm going to guess that the answer isn't a very big number. But Barry Fraser did it. Even if we look at his entire record, he made 233 selections, 18 of which played at leas 800 regular season games (7.7%). Kevin Prendergast made 67 selections, none of which have 800 yet, but I'd say that there are eight guys with a chance. He'll need six to beat Fraser. Do you think six of Jarret Stoll (712 games so far), Ales Hemsky (664) Kyle Brodziak (542), Andrew Cogliano (532), Matt Greene (499), Sam Gagner (475), Jeff Petry (229) and Riley Nash (102) make it to 800? It's possible, but I wouldn't say it's a sure thing. And how many of those guys are going to make the Hall of Fame? Clearly zero. Are any of them as good as even, say, Glenn Anderson? It seems clear that Barry Fraser really wasn't that bad.

Shayne Corson played for some horrendous teams when he was with the Oilers, and yes, he was a prickly guy on those teams. Good, I say! The Oilers could probably use a few more guys vocally upset with all of the losing now. Corson scored 0.28 goals per game and 0.71 points per game while he was in Edmonton, which is actually pretty darn good. He was a gritty player who always wanted to win and always wanted to contribute. Are we really going to say that a guy who scored well and tried hard is one of the worst Oilers ever? It seems clear that Shayne Corson really wasn't that bad. 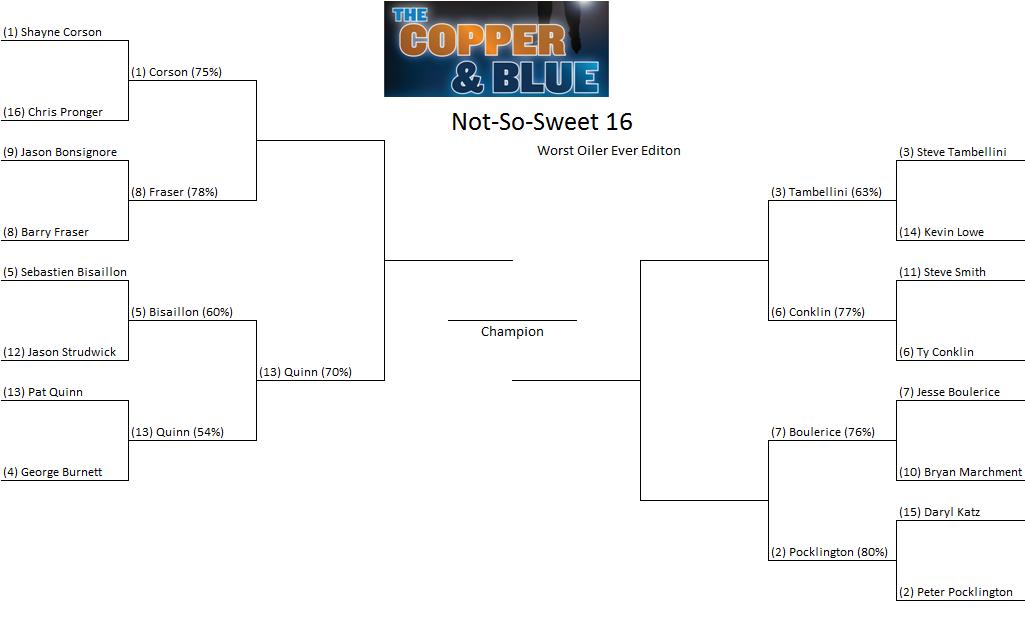