Yesterday, Peter Pocklington cruised into the second round with the best winning percentage of any victor so far, taking 80% of the vote. Will the top seed be able to take that many votes? We'll see, but I've got a feeling this one might be a little bit closer.

Chris Pronger is a great heel. He did an interview with Jim Rome in 2008 that I really can't take any other way, in part because declared his role during the interview itself:

It’s another team that can boo me and it’s a way for fans to stay entertained . . . At the end of the day you’re trying to entertain the fans and if that’s what it takes on any gives night, it’s probably one building in maybe 20 now that I get booed in.

And then played the heel in a hilarious way:

There’s obviously a few things that didn’t set well with me, for instance, taking the furniture that I had in my house and burning it, and having a "Burn Chris Pronger’s Furniture Day" (...) They burned my kid’s crib and things like that. When you hear stories like that it doesn’t sit well. But having said that, you know, I’ve turned the page. It would be nice to see them turn the page, but I doubt that’s gonna happen any time soon.

That allegation probably isn't true, which is part of what makes it so ingenious. Pronger didn't make up the rumor, he's just repeating it, and then telling Edmonton fans that they're immature rubes who need to get over it immediately after repeating a rumor that makes them look terrible. Hilarious, awesome heel behavior. That said, I know that some people hate the guy so I decided to include him in this tournament... even though his one year as an Oiler saw as many playoff victories for the Oilers as the rest of the last twenty years combined.

Whereas I think Chris Pronger mostly plays a character with the media and tries to entertain people, I think Shayne Corson's prickly behavior extends well beyond entertainment. He seemed to be feuding with someone everywhere he went, wanting to be held up as a leader, but showing very little ability to be part of a team. I talked about his feud with George Burnett in an earlier entry, but thought I'd highlight Corson's extremely disingenuous reaction to Burnett being fired:

I hate to see George lose his job. Before, I was hoping I would be moved. Now I'm hoping to stay.

It's such a strange quote. Usually when a player uses that first sentence, they don't immediately undercut it. Anyroad, not a good choice for the captaincy for many reasons, most of which are detailed in Bruce McCurdy's great article on why Corson is the worst captain in Oilers' history. Whether it was his "bad in the room" antics, his dirty play on the ice, or the team's awful performance during his time here, there really isn't much good to say about Corson's time as an Oiler. 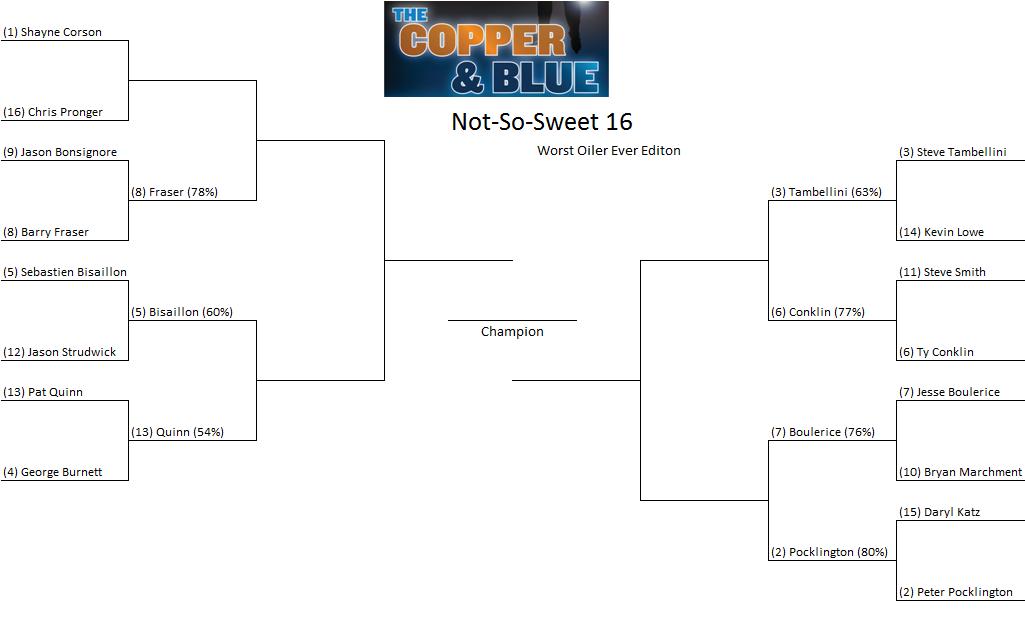