Scrivens Faces 50+ Yet Again & Gets the Win

Oilers beat the Ducks 4-3 in overtime

Share All sharing options for: Scrivens Faces 50+ Yet Again & Gets the Win

After three really bad losses in a row the Oilers took on the Anaheim Ducks, a team trying to move into first place in the Pacific Division. The Oilers on the other hand have pretty much secured their position in the Pacific Division and are well on their way to drafting anywhere between 1st overall and 3rd overall. So the game was a little bit of a mismatch and no matter what the final score says trust me it was a mismatch.

Ben Scrivens got the call in net tonight and would would prove to be a good decision. The other note was that Mark Fraser finally got a well deserved rest in the press box while Anton Belov drew in for the game.

1:04 - Matt Hendricks drops the gloves with Daniel Winnik and Hendricks gets the extra roughing penalty sending the Oilers to the PK.

3:24 - Matt Beleskey tips the puck but Scrivens makes a strange move but still stops the puck.

4:00 - The puck goes behind the net and Jonas Hiller plays it. Tyler Pitlick almost steals the puck but Hiller is able to recover.

4:43 Goal - Hall makes turning blind pass to neutral zone, David Perron is there to pick up the pass and him and Sam Gagner end up getting a two on one. Perron makes a nice pass to Gagner who scores his 100th career NHL goal which is also the Oilers' first shot of the game.

6:24 - Teemu Selanne gets a bouncing puck but can't control it enough to get a good shot on net. Meanwhile Anton Belov drives Mathieu Perrault into the net.

6:34 - Jakob Silferberg tips the puck and it floats past Scrivens and hits the crossbar.

11:28 - Andrew Ference makes a pass to an open wing and the Ducks recover and almost get a scoring chance.

11:12 - Corey Perry weaves around Jeff Petry and gets a great chance but Scrivens is able to kick out his pad and stop the shot. The he makes another stop off of Getzlaf.

12:18 - Stephane Robidas hits Taylor Hall from behind but no penalty is called. Perron jumps Robidas and both get penalties which leads to a 4v4. Anaheim played the 4v4 like it was a power play.

15:42 - Matt Hendricks takes a tripping penalty but the Oilers are able to kill off the penalty.

19:00 - Matt Hendricks tries a wrap around attempt but misses and Gordon is unable to get his stick on the puck.

0:53 - Perry is standing infront of the net annoying Scrivens so Scrivens trips Perry and luckily no penalty is called on the play.

1:53 - I had to include this picture because it just highlights the Oilers' season. Why the hell is Luke Gazdic lined up with Selanne on a non-icing faceoff at home? #BecauseTheOilers 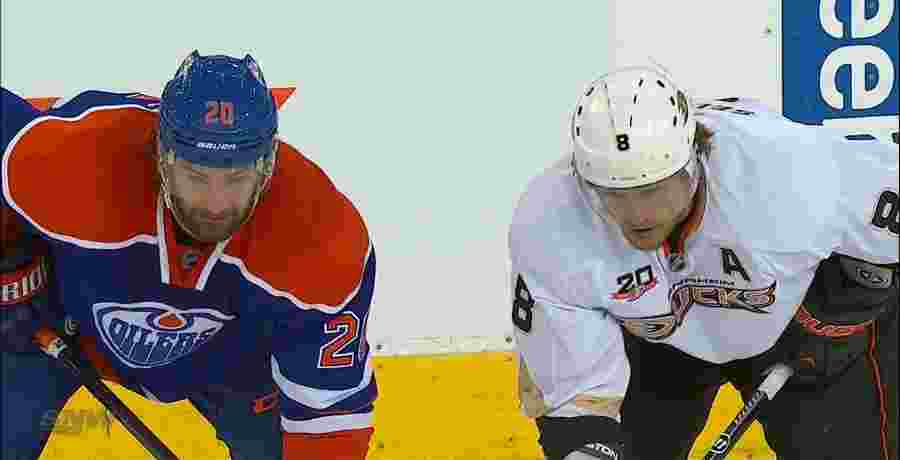 6:17 - Matt Beleskey hits the post and which line was on for the Oilers? If you guessed the 4th line you'd be right.

6:30 - Over the next seven seconds the Oilers would allow three straight shots but Scrivens would be up to the task.

9:38 Goal - Once again the Oilers are sprung on a 2 on 1 this time Martin Marincin makes a nice pass using the boards to Ryan Nugent-Hopkins. Hall is interfered with in the neutral zone and there is a delayed penalty on the play but even though he's on his ass Hall is able to stay onside. Nugent-Hopkins makes a tape to tape pass to Jordan Eberle who puts the puck into an open net.

13:01 - Matt Beleskey gets the initial shot off but then heads to the net where Ference pushes Getzlaf into Beleskey who falls on top of Scrivens who is still able to keep the puck out of the net.

15:23 Goal - Patrick Maroon scores off of a rebound. Scrivens was quite upset after the goal and the reason being that Maroon actually knocks Scrivens' trapper down before scoring. None the less the goal counted.

16:02 - Perry gets sprung for a breakaway but the play is called offside. Perry still moves in and takes a shot (which Scrivens stops). This obviously draws a crowd and both Perry and Hall get penalties.

18:48 - Once again Matt Hendricks drops the gloves this time with Matt Beleskey

20:00 - Ryan Smyth behind the net centres the puck to Boyd Gordon who snaps the puck at the buzzer but Hiller stops it and it wouldn't have counted anyway as time had expired.

Tyler Pitlick hurt himself at some time during the second period and would not return to the game. I apologize for the short review of the third but there wasn't anything overly interesting other than the goals and the power play.

0:43 - Robidas takes a penalty but the Oilers are unable to capitalize on the power play although Smyth got really close

2:59 - After Perry gets a shot on net he gets taken into the net which ends up clipping Ryan Jones' leg and he had to leave the game for a while

8:26 Goal - Oscar Klefbom scores on a great pass from Perron and Justin Schultz

15:30 Goal - Perrault scores on a feed from Maroon and Selanne. There was a lot talk on twitter about this being Petry's fault but he took his check. This goal was actually on Hall although he did get back he redirect the puck that fooled Scrivens.

This was probably the most entertaining overtime period I have watched in a long time. It wasn't your typical the referees don't want to decide the game (which is a misconception anyway because by not calling penalties they are still deciding the game) as they called 3 penalties in the overtime period.

0:21 - Vatanen gets a shot to the net. Corey Perry drives to the net but is hooked by Ference on the way which results in a 4v3 power play for the Ducks.

0:50 - Perry gets yet another shot away but as he had done all night Scrivens was able to stop it.

2:13 - Off of the draw Scrivens plays the puck to the corner where it gets to Hendricks who is able to clear the puck and kill off the last few seconds of the 5v3.

2:21 - While on a 5v4 power play Perrault trips Gordon evening out the penalties and the game is now 3v3

1:51 - Schultz has the puck and brings it into the offensive zone. Hall races against Andrew Cogliano to get to the front of the net and Hall beats Cogliano to the inside and gets a really good chance on net.

1:13 - Vantanen clears the puck into the neutral zone. Ference having just gotten off the bench races up the ice, gains the zone and blasts the puck from about 55 feet out and beats Hiller.

I know people are going to bitch at me for the 5 rating but here is reality. The Oilers allowed 51 shots against! Scrivens has face 50+ shots in 3 of his 14 games as an Oiler. The Ducks had +82/-37 Corsi rating! They more than doubled the Oilers in shot attempts. Sure the Oilers scored 4 goals but maybe that is more a testament to the play of the Ducks than the play of the Oilers.

Ben Scrivens. If it wasn't for the play of Scrivens tonight this would have been another blow out against the Oilers.

The pairing of Ference and Petry. I don't know why but this is probably the worst pairing the Oilers have. Both are decent in their own right but should never, ever play together again.

Hey the Oilers are finally out of the fifties and only 1 point away from tying their worst two seasons. Who knows maybe they'll be able to win one more game before the season ends and surpass that number.

The Oilers face the New York Rangers on Sunday. The Rangers lost to the Flames today and probably don't want to leave Alberta with a losing record so be ready for some fun!

Oh and I won't be doing the post game next game as Ryan was nice enough to sell me his tickets to the game so I could take my son.