Share All sharing options for: The Fourth Annual Not-So-Sweet Sixteen

The main draw of the NCAA basketball tournament begins today, and while I don't actually pay much attention to college basketball generally, the NCAA tournament sure is fun. I've taken to celebrating that tournament here at the Copper and Blue by running a tournament of our own, the Not-So-Sweet Sixteen.

In the first edition, Rick DiPietro walked away with the title of worst active contract in the NHL (all four semi-finalists were bought out of their contracts). In the second, we crowned Don Waddell as the worst general manager of the 2005 CBA (none of the eight quarter-finalists currently serve as NHL general managers). Finally, last year we crowned Andrew Raycroft the worst regular goaltender since the league expanded to twenty-one teams in 1979.

This year? Given that the Oilers are clearly at a low point in their history, it seemed right to me to look for the worst Oiler in team history. It might be a player, but it could also be someone in another role, and in that spirit, we'll kick off the tournament today with a player and the scout that drafted him. In the first round, I'll try to tell you why each contender deserves your vote because, as always, your votes will determine who moves on to the next round.

The highest draft pick in team history until Edmonton selected Taylor Hall in 2010 was a flat-out bust. He played just twenty-one games for the Oilers, scoring one goal and adding two assists. He didn't do much better once he arrived in Tampa either. The Edmonton Journal did a great interview with Bonsignore back in 2007 in which he clearly identifies some of the reasons he didn't make it:

I'm man enough to say I'm largely responsible for a lot of stuff that happened to me. I was lazy at times. A lot of times I was out of shape and that's my fault. I spouted off when I shouldn't have.

That quote is both infuriating and endearing. This is a man who clearly learned a lot from his experience in pro hockey... at the expense of the Oilers and their fans.

Was Jason Bonsignore a bust? Sure he was. The tenth first-round pick to bust out of the thirteen that Barry Fraser had from 1984 to 1994. The ten guys selected were Bonsignore, Nick Stajduhar, Joe Hulbig, Scott Allison, Jason Soules, Francois Leroux, Peter Soberlak, Kim Issel, Scott Metcalfe, and Selmar Odelein. Those ten players combined to play eighty-two regular season games with the Oilers, scoring twelve points. Fraser's decade of horrible drafting caught up to the Oilers in the early 90s in a big way, and the club has never really recovered. 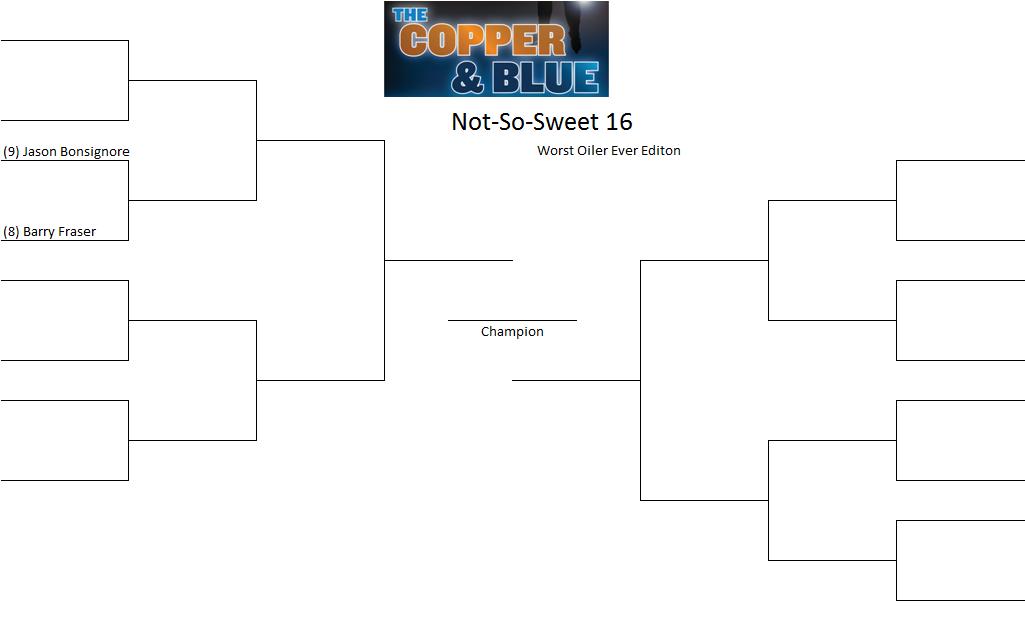