Turning Point Or Blip On The Radar

The Oilers are 9-4-3 in their last 16 games. Is that a sign that things are moving in the right direction, or just a run of good luck?

Share All sharing options for: Turning Point Or Blip On The Radar

On January 24, 2014 the Oilers lost by a score of 4-3 to the Phoenix Coyotes. After eight losing seasons it's become quite difficult to differentiate one loss from the next. And in all honesty, after this many losses I'm not even sure why we would want to bother, the team sucks time to move on. But still, I was curious because this game had been played in Edmonton and I hadn't sold the tickets, meaning that I'd actually attended the game, and yet I couldn't remember thing one about it even though it'd been played only seven weeks ago. So I consulted the archive of my life - Twitter - for answers.

Oh yes, I remember this game now. The Coyotes scored three goals in the final six minutes of the first period, and then added another early in the second to take a 4-0 lead. Good times. With the Oilers trailing by a 4-1 score after two periods my wife actually went home, allowing me to watch the rest of the game in peace leaving me alone with my beer and my thoughts for the final twenty minutes. A couple of third period goals from the Oilers would see the game end close, but all in all it was, obviously, a largely forgettable game.

Why all this about a game played seven weeks ago? Well because since that night the Oilers record has actually been quite good. Following that loss the Oilers had a 15-32-6 record, good for a 0.340 point percentage. Since then the Oilers record has been 9-4-3 in 16 games. That's a 0.656 point percentage for those without a calculator handy. Obviously 16 games isn't much of a sample, but it's a welcome change to see the number of wins exceed the number of losses, even in small samples.

The question now is, have the Oilers reached a turning point, or is this just a blip on the radar? Let's start with a look at the Oilers' Fenwick percentage over these two stretches to see if there is a simple answer to that question. All numbers are taken from extraskater.com.

For those who aren't familiar with it, Fenwick is the number of unblocked shots directed at each team's goal. And those Fenwick percentages are, for lack of a better term, ugly. In the short term you can ride percentages and see some success even when most of the pucks are being directed at your net, the Oilers have done just that for 16 games, but in the long term it likely won't lead to prolonged success. So the short answer to the question above - Have the Oilers reached a turning point? - is in all likelihood that no, they haven't. They've won some games, but I don't think they've played a whole lot better, just gotten a little luckier.

Normally if a team is getting beat up in terms of possession, like the Oilers have been lately, they will need either outstanding shooting or save percentages (or both) to make up the short fall. In the case of the Oilers they've been doing it with goaltending. 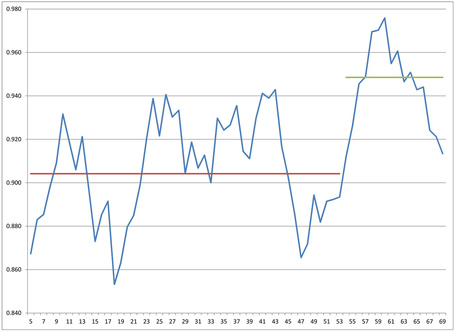 The graph above is the Oilers' rolling five game save percentage in all 5-on-5 situations. The two horizontal lines indicate the team's save percentage over the two segments identified previously. The first thing that jumped out at me when I look at that graph is that in their first 53 games the Oilers failed to get five consecutive games with goaltending as good as they've gotten over their last 16 games. Some of the improvement can undoubtedly be traced to changes between the pipes, Ben Scrivens joined the Oilers after game 49 this season and the team started trending upward shortly after, and some should probably be attributed to a well deserved stretch of luck.

How much of the Oilers changing fortunes you want to put on Scrivens' side of the ledger versus how much you think is just a run of good puck luck (this is where I sit), will give you a very different perspective on the team's last 16 games. Should we expect Scrivens to continue playing at the level he has? I think the smart money would be on no, but we shouldn't expect the goaltending to return to it's pre-Scrivens level either. The answer probably lies somewhere in between.

The problem for the Oilers is that the land in between won't be very friendly to them if they don't get the puck moving in the right direction a lot more frequently. The results have been nice, but the process still isn't there, and until it is I don't think this team will ever really turn the corner.