The mere presence of a contingent of contributors from Copper & Blue inspires the Oilers to defeat the last place Buffalo Sabres...probably.

There haven't been many things for the Edmonton Oilers to look forward to this season through the end of January, but the next three months or so are shaping up to be much better. The franchise has a number of things to look forward to, including:

The team was undoubtedly in high spirits tonight knowing that a collection of their most ardent supporters had travelled all the way to Buffalo to cheer them to victory. In unrelated news...Dawgbone, Ryan, Jeff and Zsolt (OilFanInYYC) were also in the arena tonight.

The guys really must have worked their magic in Western New York and Chappy, the local resident in the area among the attendees really went all out as even though they were in the white hot hockey market of Buffalo (it actually is a decent market when the team is good) and accounting for the exciting brand of hockey being played by the upstart Sabres, the guys were able to secure 4th row seats despite not having tickets as recently as a few days ago. Here is a shot from their seats that was sent to me during the game: 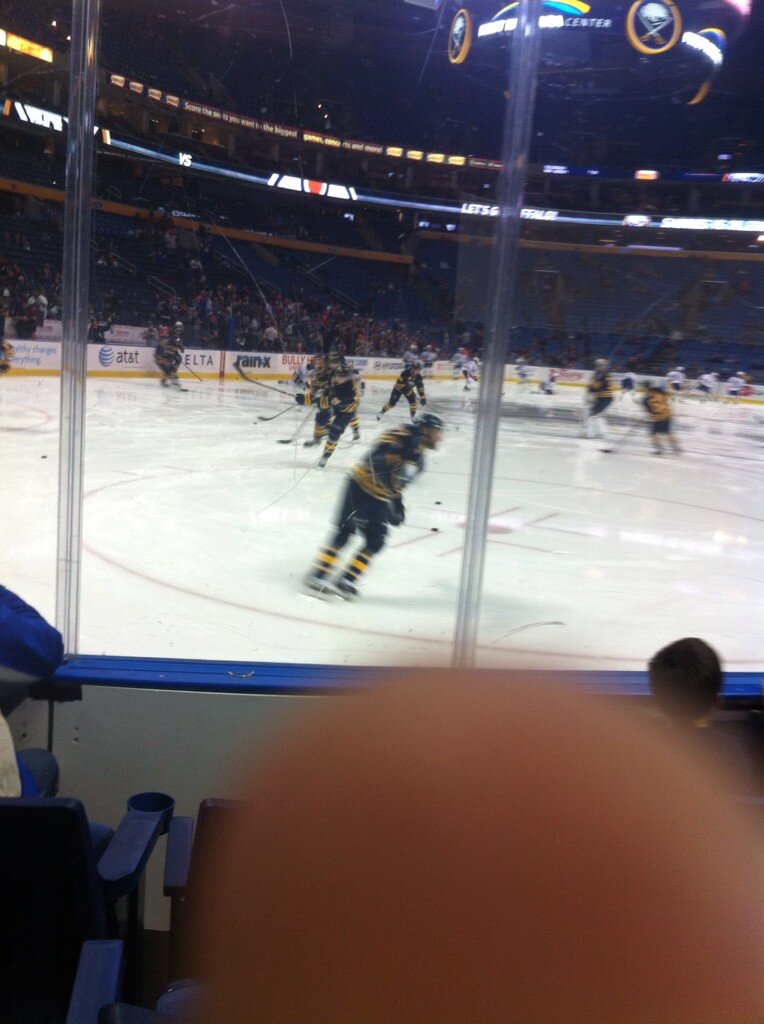 As for the game itself, well...the Oilers actually won despite not getting a record-setting goaltending performance.

The Oilers scored in the first minute of both the first and third periods, Jim Matheson's favourite player scored against the Oilers again, both teams netted a short-handed goal and the Oilers powerplay continues to look as if they are being coached by my 4 year old son. Beyond that, this game wasn't exactly riveting. The win does allow the Oilers to stay out of dead last in the NHL in % of points earned per game played. Had the Sabres won in regulation, Edmonton's points % would have dropped below Buffalo's, which, I'll be honest, in even my most pessimistic projections I never thought was possible this year.

The Oilers play in the toughest division in hockey and have a more difficult schedule down the stretch so it is still very conceivable that they could get that #1 spot in the lottery order and break their own all-time record of complete and total ineptitude.

For tonight though, it was a win. I hope our guys had a great time at the game and that you did too if you sat through it. I'm sorry I wasn't able to be there with them to watch the Ekblad bowl. I'm sure they will be chronicling their adventures in a sure-to-be hilarious post over the next few days.

The one interesting thing...

I'm sure it won't amount to anything and it may be my imagination running rampant since the team has basically been playing out the string since December 1st, but if you have the capability to go back and watch a portion of this game, check out 4:56 of the 2nd period (15:04 remaining on the clock). The Oilers are on a powerplay and Taylor Hall picks up a loose puck along the half wall. The play Hall is trying to make is a pass to Justin Schultz at the point. The result of the play is a missed pass that sees the puck go back into the Oiler zone, but if you watch closely, Hall's head is up and looking at the point before he makes the pass. He should easily have seen Schultz was 10 feet off the boards and shifting towards the middle of the ice. Instead, Hall throws the puck up the wall to the place Schultz had just vacated, missing his teammate by about 10-12 feet or so.

I'm sure it could just have been a miscommunication, but I'll repeat that Hall's head was clearly up before moving that puck and it almost seemed like he was teaching Schultz a lesson or something by passing the puck to where he wanted Schultz to be rather than where Schultz had moved to. I'd never accuse an NHL player of tanking, but is it possible he was sending his teammate a message or something? It was a bizarre play and I had to watch it a number of times to make sure I wasn't seeing something that wasn't there. Curious if anyone else noticed it and what they thought about it...

Does it really matter? Let's go with Petry and Marincin at #1 and #2 respectively, since they are so much better than the rest of the blueline its laughable...and, you know what...for the hell of it, #3 goes to Matt Hendricks for performing well on the one task he is known for doing well...scoring on breakaways. Plus it was a shortie, so good on him.