The Top 25 Under 25 - Saying Farewell to Tyrvainen

Share All sharing options for: The Top 25 Under 25 - Saying Farewell to Tyrvainen

The first two votes have seen Mitch Moroz and Luke Gazdic take pretty commanding victories. Will we see another big forward take most of the votes this morning, or will the readers move in a different direction? You'll be hearing more about one of the seven players sometime in the next few days, but for the other six, this is the end of the line.

Ben Betker: He's huge and he's playing a regular shift in the WHL, which is a pretty good start. The WHL website is currently listing him at 6'6'' and 215 lbs. so we're talking about a defender with good size here. As you might expect, Betker takes quite a few penalties, but of his 82 penalty minutes, 30 come from coincidental fighting majors and another 8 from coincidental minors, which means he's put his team shorthanded 22 times through 52 games. Here's a quick look at his rap sheet: 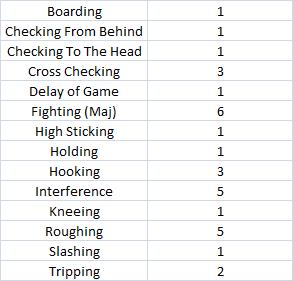 Quite a few hard plays in there but also some stick fouls and interference calls, which may suggest that the big man is sometimes getting beat with speed. I looked around to find some scouting reports but it was tough to find much from solid sources, although Kelowna broadcaster, Regan Bartel, was impressed with Betker in a recent viewing. Last Ranking: #44.

Laurent Brossoit: He came to the Oilers in the trade that sent Ladislav Smid to Calgary, so you've got to hope that he's a decent goalie prospect. He hasn't played well in very limited AHL minutes this season, but he has been doing very well at the ECHL level where he currently leads the league with a .938 save percentage. That's nothing to get too excited over, but in addition to plenty of scrubs, Ben Scrivens and Anton Khudobin put up similar numbers during their first professional years in the ECHL. All in all, we haven't yet seen any signs of greatness, but we're a long way from being able to write Brossoit off. Last Ranking: N/A.

Travis Ewanyk: This player had virtually no offense at the WHL level, so it can't be too surprising that he's put up virtually no offense at the AHL level. That said, he was very highly regarded as a checking center in junior, so it was very interesting to read Jason Gregor's interview with Todd Nelson wherein Nelson critiques Ewanyk's defensive play as he adjusted to OKC's system. Nelson said that Ewanyk is now doing much better than he was at the start of the season, which likely means he'll be getting a bit more ice time. It'll be interesting to see if Ewanyk's able to add a little bit of offense with the increased responsibility. Last Ranking: #36.

Joey Laleggia: The Oilers drafted Laleggia after an incredible freshman season with the University of Denver. Almost two years later, we've seen Laleggia put up two more similar, though slightly inferior, offensive seasons. With his schedule getting slightly tougher this year, the decreased offense is probably forgivable, especially since Laleggia currently leads all NCHC defensemen in scoring during in-Conference games. So he's still good at what he's good at. The real question, and the one we're no closer to answering, is whether or not he'll be able to translate his offense from college into the pro ranks and eventually to the NHL. Last Ranking: #32.

John McCarron: He had a monster start to the season, but has cooled substantially over the last month and now has seventeen points through twenty-two games, which is good enough for fifth on the team in scoring. He's also taken eleven minor penalties, or one every two games, which is probably too many. When Alan interviewed McCarron before the start of the season, McCarron talked about expanding his role to include things like penalty killing, but he's blocked just seven shots so far this year, so it looks like that may not have happened. That's unfortunate since he's likely going to want that element as a strength when he moves up to the pros. Last Ranking: #28.

Frans Tuohimaa: The Oilers signed him to a two-year entry-level contract this summer, and are now probably regretting their decision. Tuohimaa's .894 save percentage is third worst in the Liiga and almost comically far behind creasmate, Juuse Saros who sits in third at .930. I know that golies have their ups and downs, but Tuohimaa is having a really bad season. Last Ranking: #35.

Antti Tyrvainen:After a couple of years in North America, Tyrvainen returned to Finland this season, and he's back to his old habit of annoying everyone he plays against. He only has ten points in thirty-three games, but Tyrvainen is also second in the Liiga with 122 penalty minutes (the player in first has one more penalty minute in a dozen more games). He'll be turning 25 before our next edition so this will be Tyrvainen's last opportunity to score a spot on our list, but it certainly doesn't seem like he's poised to make it. Last Ranking: #46.