Share All sharing options for: The Top 25 Under 25 Returns

With the NHL taking a break for the Olympics (and Oiler fans taking a break from all of this losing to cheer on a winner), this is the perfect time for the Copper and Blue to gather our now ten-person panel of writers both past and present to come together for the winter edition of the Top 25 Under 25.

Usually the list of eligible players in the winter is similar to the previous summer, but we've actually seen quite a bit of change this time around. Of the 47 players we ranked last time, nine aren't going to be returning Teemu Hartikainen (11) and Cameron Abney (47) were both recently traded to the Maple Leafs, Olivier Roy (24) was shipped off to Calgary, and Ryan Martindale (40) was sent to the Panthers; Toni Rajala (16) and Lee Moffie (33) were released; and Mark Arcobello (22), Andrew Miller (27), and Brad Hunt (31) all turned 25. Hartikainen and Rajala were the only two players inside the top twenty to go, and both guys are having fine seasons in Europe (Hartikainen has 0.63 points per game with Ufa of the KHL and Rajala leads HV71 of the SHL with 0.88 points per game). On the other side of the ledger, the club has added three new players in Laurent Brossoit, Luke Gazdic, and Roman Horak.

That leaves us with 41 eligible players, which means we've got 16 guys who aren't going to make the cut. 20 players received a vote inside the top 25 from each of our ten panelists, and of the remaining 21 guys, 11 received at least one vote inside the top 25. Of the men listed below, one eventually made it, while five others missed the cut. Vote below for which player you think most deserved to get in and we'll see if our readers have a similar view to our panelists.

Tyler Bunz: This guy just hasn't been able to perform well as a professional. His rookie season was very poor, and his second one hasn't been much better. Bunz has improved his ECHL save percentage from .886 in 2012-13 to .904 this season, but that's only good enough for 31st out of 45 goalies with at least ten games played. It's not too surprising, then, that Bunz has lost the starting job to newcomer Laurent Brossoit. Last Ranking: #38.

Evan Campbell: Campbell's BCHL offense left quite a bit to be desired even before the Oilers drafted him this past June, so can't be too shocking to see Campbell struggling to put up offense in his first year at UMass-Lowell where he's got five points through twenty-one games. In the jar labeled "looking for positives" Campbell does have four of those points (and nine of his twenty-eight shots) in his last five games, so it seems like his role there might be expanding. Last Ranking: #43.

Brandon Davidson: He had a pretty darn good year in 2012-13, but Davidson hasn't been nearly as impressive so far this season. With five points in forty-one games, he hasn't shown any growth offensively and in Jonathan's recent look at the AHL depth chart (he's in OKC and watching the games!), he had Davidson seventh among defenders. In that we've seen Taylor Fedun, Denis Grebeshkov, Brad Hunt, Philip Larsen, Martin Marincin, and Corey Potter all play at least two NHL games this year with Davidson getting none, it looks like the organization probably agrees. Last Ranking: #21.

Mitch Moroz: With 29 goals and 53 points through 54 games with the Edmonton Oil Kings, Mitch Moroz is certainly having his best year in the WHL. The problem is, that's still not very good (in terms of NHL potential) for a player as old as Moroz in the WHL. After the Oilers drafted Moroz, I found several comparable players, so we can use those guys to gauge where Moroz is at now (adjusting everybody's offense in their Draft +2 season to a league that scores 6.8 goals per game; the WHL is currently at 6.54 so far this season so Moroz gets a slight bump): 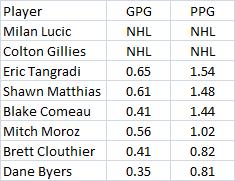 So he's ahead of the also-rans but well back of the crew who played a significant number of games in the NHL. He's not a lost cause exactly, but don't let this season mislead you into thinking that he's got top nine potential. Last Ranking: #37.

Aidan Muir: Shortly after the draft I said that Muir had some of the longest odds to make the NHL among prospects currently in the organization, and half a year later, not much has changed. Muir has 21 points in 35 games with the USHL's Indiana Ice so far this season, which is just seventh on his team, and two of the players ahead of him are younger. He's a good USHL player, but that's about it, right now, and there's a long way from that to the NHL. Expecting more than what he's delivered wasn't reasonable based on past performance, but he'll need to demolish reasonable at some point just to have a chance. Last Ranking: #42.

Kyle Platzer: A strange pick from the start, Kyle Platzer was a diminutive depth scorer with the London Knights last season, and he was buried again this year when London teammates Max Domi and Bo Horvat both failed to make their respective NHL teams. Platzer caught a break when he was traded to Owen Sound earlier this season, and while his scoring has improved since the trade (0.44 points per game with London this year compared to 0.62 with Owen Sound) it's flat-out not good enough for basically any kind of NHL forward prospect let alone a small scorer. Last Ranking: #34.