It took four years, but the Oilers closed the storyline perfectly.

A screenshot of the Oilers' silliness on Radim Vrbata's goal courtesy of the Sedins last night circulated on Twitter and struck an immediate chord with me. OilCountryD Tweeted the pic:

It reminded me that four years ago, the Oilers were in the habit leaving the middle of the ice unguarded. I wrote about it then:

...Edmonton gave up a goal to Radim Vrbata because of faceoff positioning in a four-on-four situation.

In the intermission interview, Vrbata spoke about seeing the positioning and talking to Hanzal about winning the faceoff forward to the zone for the breakaway.

The goal has unfortunately disappeared from NHL.com video archives, but we have screen caps: 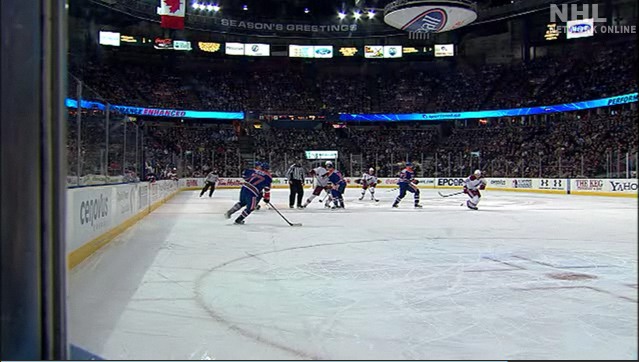 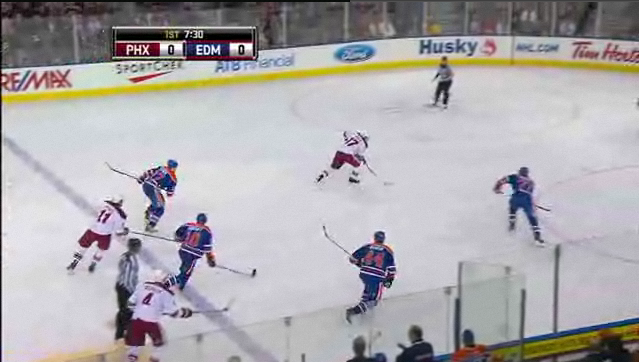 Two weeks later they did it again:

The faceoff was in Edmonton's zone late in the game and Denis Grebeshkov chose to line up on the circle, goal-side. Jason Strudwick then motions to Grebeshkov to change his positioning to the left wing, on the boards, leaving the center of the ice open to the Sedins and Salo, as seen here:

And then last night, where they combine leaving the middle of the ice, Radim Vrbata and the Sedins all in one, bringing together the Easter eggs and story arc in one exciting scene: