Not all "average" even-strength goaltenders are equal.

In part one of this series I suggested a method for visualizing goaltender performance using Save Percentage Plus (SV%+), a statistic that normalizes save percentage against the league average. SV%+ above 100% indicates above average performance. I converted even-strength, short-handed, and all-situations save-percentages from the now defunct Extraskater into SV%+ data (esSV%+, shSV%+, allSV%+). The premise is that there are several ways to be a great goalie, that great performances can be heterogeneous, and to visualize this difference with data. 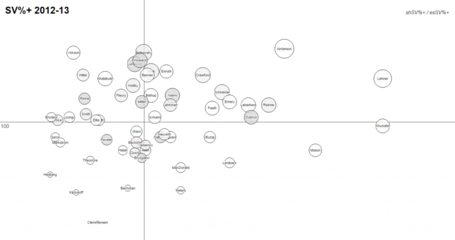 Click to enlarge. esSV%+ (abcissa) plotted against shSV%+ (ordinate). Lines at 100% indicate league averages. Bubble size indicates allSV%+. The darker the bubble the higher the Fenwick Against (FA). Table and interactive chart data may also be viewed here . My selection criteria was 25 percent of total games played. For the 2012-13 season, this means that goalies who played 12 games or more were included.

The 2012-13 graph isn't very dark in comparison to the previous season as there were fewer fenwicks during the lock-out. There is less regression to the mean and the over-all performance is somewhat scattered.

League-wide save percentage averages are known to vary from season to season, just as the number of goals scored per game has historically varied. Because SV%+ expresses goalie performance against the mean it makes for fairer comparisons between seasons and between eras. In the above graph the physical position of the bubbles (xy coordinates) may be compared between visualizations. We can see, for example, that Kiprusoff was much worse in his final NHL season than he was the season before.

Goalies were generally less consistent in 2012-13 than the year previous. This is visible in the charts, but we can also express this league-wide consistency with numbers. Below is a chart expressing the variance of SV%+ for both seasons (numbers provided are standard deviations).

Playing Short-handed is a Skill (?)

There is generally a larger amount of variance for short-handed performance. It's not uncommon for above-average goalies to perform well below-average when their team is down a man. Such performances are in the top-left quadrant of our vizaualizations. As pointed-out by aluchko in the comments from part one:

The correlation between esSV%+ and shSV%+ is less than I’d expect, I wonder if this is evidence that they require slightly different skillsets or if it’s just the high variance of the shSV%+.

There’s evidence to support the notion that playing short-handed is a skill. If teams share duties equally between two goalies that are generally "average" but give differing short-handed performances, we might suggest that there is something different about the skills or concentration required for short-handed play. Certainly the quality of the team’s penalty kill is also important, and it's possible that such irregularities are due to chance or other variables.

As revealed by the chart below, in 2011-12 Dubnyk and Kabibulin had wildly different shSV%+ on a team with a decent PK% (83.4%, 9th overall). Interactive chart may be viewed here.

Dubnyk's performance in the lock-out year was excellent. He was an above-average goalie with a very good shSV%+. This is the kind of performance that a young team needs, a stable goaltender who can pull one out of the fire now and again. It might be less damaging than a performance that's above-average during even-strength play, but below average when the team needs the keeper to make a stop short-handed (i.e. Khabibulin 2012-13).

Note that during the lockout year many of our finest goalies, goalies who during the previous season were prominent in the top-right quadrant, were only average when it came to short-handed play (Lundqvist, Quick, Smith, for example).

To really provide a measure of "pulling one out of the fire" what is required is "SV%+ close". Perhaps such a beast will exist in the near future.