Even Taylor Hall wants you to be as good as him.

The writers here have always been at least a little but suspicious of Jordan Eberle. Did he have a very good rookie year? Sure, but he scored just three goals and five assists in seventeen games after Taylor Hall was lost for the season. Did he have a very good sophomore year? Yeah, but his thirty-four goals were only possible because of an unsustainable 18.9% shooting percentage. That season remains Eberle's high point offensively. His shooting percentage has come down (to 13.2%, which makes me feel good about my 12.7% line in the sand when that debate was raging) and while his shot totals have increased, it hasn't been enough to keep him among the league's top scorers. The great Eberle debate seems to be settling into a place where everyone acknowledges that he's a good young player, but that it's unreasonable to expect him to reach the superstar level of Taylor Hall.

The problem is that Eberle isn't that young anymore. Eberle has tumbled one more spot in the rankings with new addition Leon Draisaitl joining the three first overall picks ahead of him in part (at least for me) because Eberle is basically a known entity now. He's in his prime. Thus Derek, the least optimistic about Eberle, might be the most optimistic about the team, while DB's Eberle optimism almost certainly means he wouldn't predict a Stanley Cup in Edmonton's future. The Oilers need some of these other young players to pass him because if Jordan Eberle is the second-best player on this team, it's probably not going to win a championship.

This argument is largely predicated on the idea that Eberle isn't going to get substantively better, and at least in terms of goalscoring (Eberle's finest attribute), I think there's a strong case to be made for that perspective. The following chart includes every player whose first year of draft eligibility was 2001 or later, who scored at least 0.40 goals per game in a single season by age 22, and who has reached his Draft +8 season: 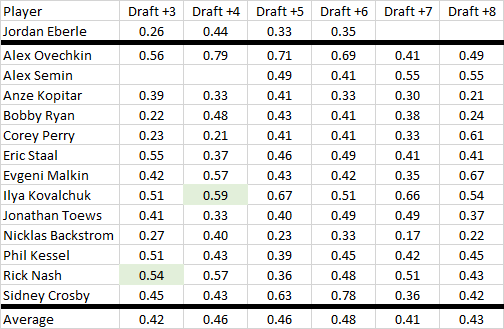 By way of explanation, the average doesn't include Eberle, and the seasons marked in green for Kovalchuk and Nash are hypothetical to account for the 2004-05 lockout (I just took the average of their 2003-04 and 2005-06 seasons). Jordan Eberle has impressive company on this list, a lot of really good goalscorers here, but what we don't see from this group of really good goalscorers is marked improvement as they move into their Draft +7 and Draft +8 years. The totals actually go down slightly; I wouldn't say the group is declining so much as it's hit its peak. Taken as a group, they're pretty consistent. Now, there's quite a bit of luck involved in goalscoring, and Eberle had plenty to even get himself into this category, so I'm not suggesting 0.41 and 0.43 goals per game are reasonable estimates for his performance over the next two years. I am saying that we shouldn't expect Eberle to become a better scorer at this point, and that we'll probably see him performing at pretty close to his career average of 0.35 goals per game.

Which is great! That would've (and in fact did!) put him in a tie for 38th in the league last season. If the Oilers have two or three players on this team more valuable than that, they're in really good shape. If not, if we're prepared to say that it's unreasonable to expect players like Draisaitl and Nugent-Hopkins and Yakupov to provide more value than that, well, then this team is in trouble if the goal is Stanley.

Check out previous stories in the Top 25 Under 25 series in our StoryStream.