Fresh off a win, the Oilers head to BC to see their old friends

WE'RE NOT THE WORST TODAY

Well, technically.  I mean, the Oilers still have twice as many losses as they do wins, but they have a win percentage that's two-thousandths better than the Sabres.

Five different Oilers scored goals in Edmonton's 5-1 victory over the Predators.  You'll kindly re-read that last sentence, because it indicates that the Oilers actually defeated another National Hockey League team, and they did. The Oilers will look to ride this momentous crest into Vancouver, as they surely look to have at least forty or sixty hits against the Canucks tonight.

The Oilers are saying

"We've used him on the net front on the power play and he's willing to go there.  He likes it.  He likes to be in the battle in front of the net"

Ryan Smyth has tied Wayne Gretzky with his 125th power play goal as an Oiler with this goal in front of Nashville's Carter Hutton.  He's now one behind franchise leader Glenn Anderson.  I'd be lying if I told you I wasn't cheering for him to get there.

Is there any other reason to watch these games other than to possibly see Ryan Smyth become the Oilers all time leader in power play goals?  I mean, unless you're a masochist, or a blogger.  Same difference, really.

The Opponent is saying

"We'll see what happens tomorrow but I think he's (Martin Hanzal) going to have to answer the bell.  Obviously he took a pretty good stab at Hankie (Henrik Sedin), a pretty good stab at Boothie (David Booth) and then (Mike) Santorelli off the draw.  It was tough for us (to immediately react).  We saw what he was doing but it's a tight game and you can't really go out and get a penalty trying to jump a guy, or trying to engage a guy, and then they score and make it 2-0.  So you have to be smart about the way you do it".

That's Canucks forward Dale Weise on picking the right spot for retribution.
Gee, Dale Weise seems like he's got the whole "get retribution" thing down pat.  A week ago, Coyotes forward Martin Hanzal took a few liberties with some Canucks and guess what happened to Hanzal?  Nothing.
Weise offered the above quote in before Vancouver's rematch with Phoenix yesterday.  Surely, Hanzal would pay. Guess what happened? Nothing, again. 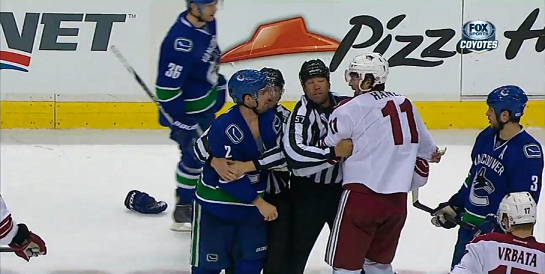 Well, almost nothing.  Unless you count this coincidental minor with Dan Hamhuis as 'retribution'.  And, I don't.

If the Canucks don't facewash Martin Hanzal, surely they're getting their show run.
Maybe they ought to hit Hanzal ten or twenty more times.
Bloggers that hide behind a handle surely wouldn't understand this concept.