As the Oilers prepare to play their first game of 2014, let's take a quick look back at the year that was.

Share All sharing options for: A Look Back At The Oilers 2013

Over the last couple of days I found myself reminiscing about 2013; certainly I'm not alone in this. Personally, 2013 was a pretty good year. Work went well, did some traveling, saw a couple great music festivals, and my wife is still putting up with me, so I've got very little to complain about. I hope your 2013 went well too, and if not then I hope your 2014 will be better. With the Oilers getting ready to play their first game of 2014 tonight in San Jose I thought I'd take a look at the year that was for the Oilers; one that certainly wasn't one of the best in franchise history.

2013 saw a lot of losses on the ice - much like 2012, 2011, 2010, etc. - but there were some good moments as well. Among the best would have to be the decision on April 15 to part ways with General Manager Steve Tambellini. Yes, Tambellini had done a masterful job at the annual NHL Draft Lottery winning the right to pick first for three years in a row, but with the team disappointing on the ice yet again and mere days away from becoming the team with the longest playoff drought, it was time for a change. In reality this same decision should have been made in April of each of the three preceding years but you take what you can get.

As you know Craig MacTavish was the man picked to replace Tambellini and right the ship for the Oilers, and much like the team itself, his first eight plus months saw some ups and downs. Turning Magnus Paajarvi and a second round pick into David Perron, that was good. A four year deal for Andrew Ference, not so much. Bringing in Anton Belov, not too shabby. Throwing big money and a long term at David Clarkson, that's downright ugly. I'd say that so far MacTavish has done more good than bad, unfortunately for him the guy who used to have his job spent four years burning the team to the ground and a single summer just isn't enough time to undo everything wrong with this club.

Perhaps the most significant move MacTavish has made during his short tenure at the helm of the Oilers is the decision to change coaches, replacing Ralph Krueger, who held the job for just one season, with Dallas Eakins. Like everything else with the Oilers in 2013 this has had mixed results. I like Eakins as a coach, and I think he's going to end up being a successful coach in the NHL. That said, there have been some things - both in game and personnel wise - in his first 42 games as an NHL head coach that have left me a little confused.

I can't say that I understand what the plan is with Nail Yakupov. Nobody is going to argue that Yakupov hasn't struggled, but the back and forth to the press box isn't the cure for what's wrong with his game in my opinion. His on-ice save percentage this season is 86.6%, second lowest among NHL forwards. Could he be better? Yes. Is some bad luck making his play look a hell of a lot worse than it really is? Also, yes. Then there was the decision to leave leave Mark Arcobello in the press box for over a week. Or keeping Will Acton around long after it was clear that he is not an NHL player. Or Luke Gazdic.

And there have been issues with the on-ice play as well. The defensive zone coverage is terrible, and doesn't seem to be improving. The power play is beyond frustrating. Of course it would be unfair to put all of the blame for these problems on Eakins, there are other coaches and the players on the ice could be better, but he isn't blameless either. For now I'm willing to chalk a lot of what I haven't liked to the mistakes of a first time NHL head coach and hope he figures these out in the very near future. But sooner or later the the results are going to have to be there or Eakins will become the fourth consecutive Oilers head coach to have a very short tenure in this city.

Speaking of results, those weren't quite what was hoped for this year either. Thanks to another lockout, hockey fans in Edmonton had to wait until January 20 before they were able to watch the Oilers play, in hindsight that might not have been such a bad thing. In the 90 games the team played in 2013 they posted an all around lousy record of 32-46-12. With 76 points for the year the Oilers managed to better the totals of only two team, the Florida Panthers (who played one less game) and the Buffalo Sabres (two less games played). After a 24th place finish last season the Oilers 2013 record was likely going to be a little ugly regardless of how improved the team was in the first half of the 2013/14 season. Unfortunately, based on their record, they haven't improved and so their yearly total is downright awful. Again.

The underlying numbers weren't that encouraging in 2013 either. Thanks to extraskater.com I was able to pull together the game data for 2013 to create a couple of charts. The first is the teams 10-game rolling Corsi%, the second the cumulative total. They're glorious in a terrible kind of way. 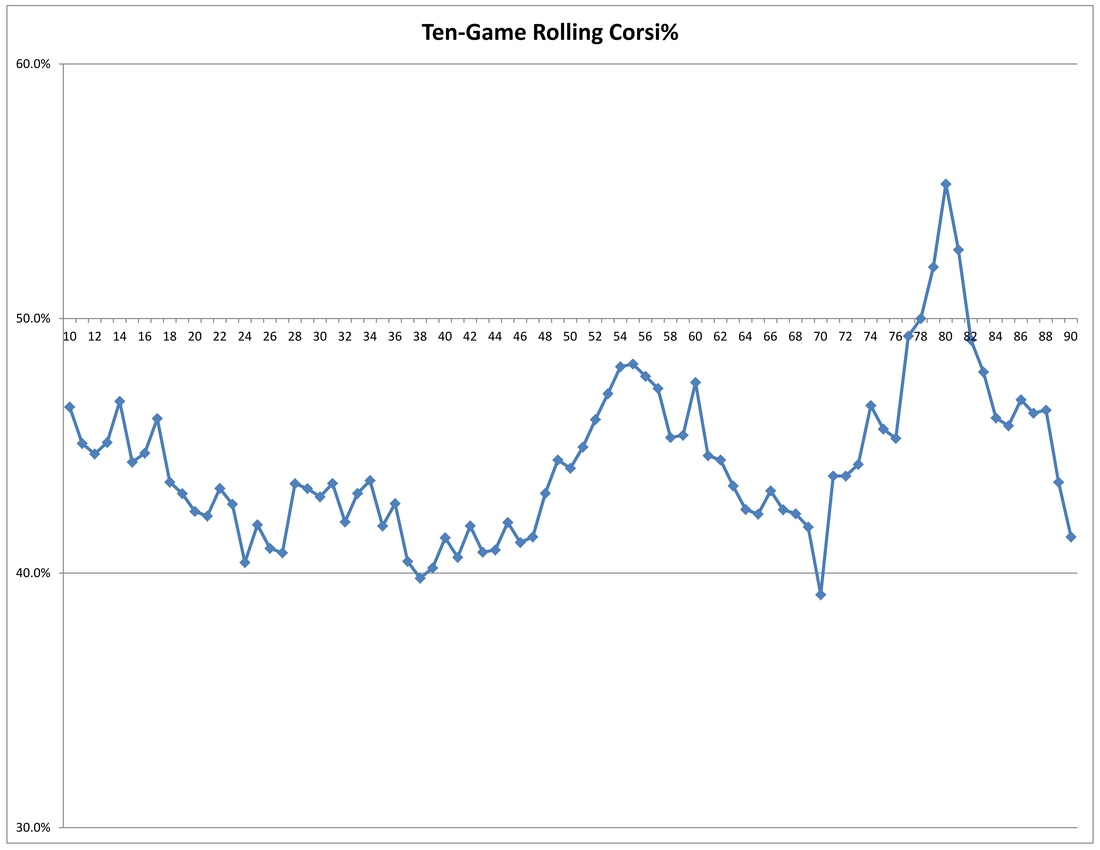 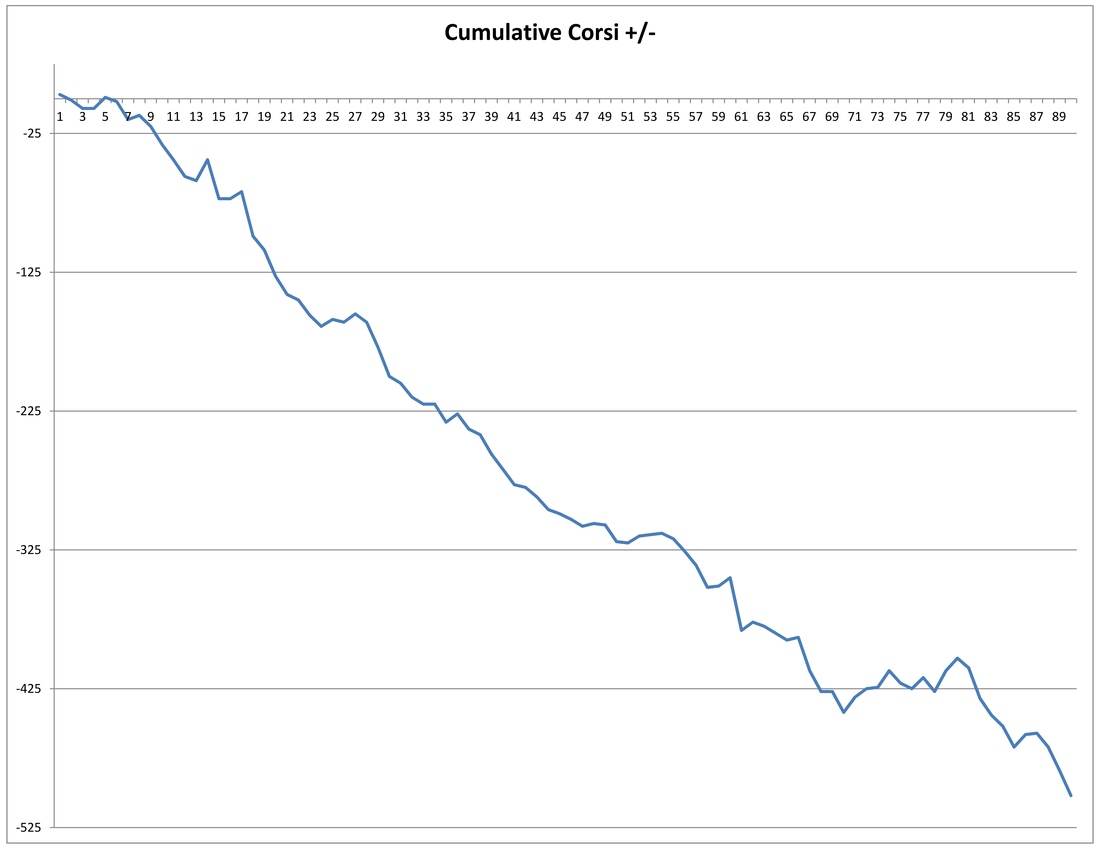 Look at the spike in the ten-game chart at game 80. That was following the Oilers win against the Hurricanes on December 10. In their previous 11 games the Oilers had posted a 7-3-1 record, and for the briefest of moments it looked like maybe they were turning things around and would be heading into 2014 on a real high. The season was long since lost but maybe, just maybe they were moving in the right direction. Then they went 2-6-2 in their next 10 the percentage went right back into the toilet.

And then there is the cumulative total. Just take a second an appreciate that line, you don't see many like that. Twice the Oilers were on the positive side of the ledge, following the first and fifth games of the year, from that point on it's been a steady decline. And thanks to the final two games of the year when the team was utterly dominated they managed to actually get their 2013 total down below -500, finishing at -502.

For so many reasons I want to forget that the Oilers even played hockey in 2013. Just wipe the memory clean and move on, starting 2014 fresh. Unfortunately that isn't possible, so I have to find a good memory to over shadow the bad. For me that's Taylor Hall. His 2013 was, to put it simply, wonderful. 37 goals and 51 assists in 80 games played, an average of 1.10 points per game, eighth best in the league over the last 365 days. There is still room for improvement in Hall's game, but I'm going to choose to remember 2013 as the year Hall took a huge step towards elite.

Or maybe I'll just watch this goal until it isn't great any more. Which will be never. Enjoy. And hopefully the Oilers have a much better 2014 ahead of them.