Part 2 of a 3 part look at fixing the Oilers without the orbital nuclear strike.

The last time you could look at an Oilers team and be happy with the roster from top to bottom was probably June of 2006 (and before that, June 1990). Since that time the team has either had significant holes at forward or on the blueline. “Holy mackerel we have a lot of defensemen” has become “Our blueline is in shambles”, while having nothing to show for that transition.

From my vantage point, the Oilers struggle with a couple of different things when it comes to attempting to fill the holes on the roster. The first is they often attempt to fill the hole with a pre-conceived notion of what that type of player should be. For instance, all of the “tough guys” they’ve auditioned at various points the last few years. Trying Will Acton as an NHL defensive centre because he had that pedigree in the AHL.

The second is they often look to another team and focus on the players who are playing that same role there. Oilers wanted some more size in the bottom 6 and they looked to teams like Chicago (Eager) and the Islanders (Joensuu). Chicago dumps guys like Eager so they can use Michael Frolik as a 4th line winger. Edmonton dumps Zach Stortini to use Darcy Hordichuk. Can you tell why one team won 2 cups recently and the other has its wheels perpetually stuck in 8 feet of mud?

The Oilers have had this strange obsession with getting big players, regardless of their actual abilities. Whether you believe size helps or not (and I agree I’d rather have the bigger player when all else is equal), I simply don’t understand how you think grabbing a guy who is 6’4” 220lbs and slapping him onto your 4th line can possibly make a line of Nail Yakupov, Mark Arcobello and Jordan Eberle magically bigger. They seem to make both kinds of mistakes when attempting to fill their perceived need of size. Jesse Joensuu is a perfect example of this. He was basically a 13/14th forward on the Islanders and the Oilers bring him in to be a 3rd/4th liner. His only real asset happens to be that he’s 6’4 and around 210lbs.

The Oilers have to scrap their current philosophy on filling holes. Don’t look for the winger who has to be a certain height or weight, get the winger who is better than what you have. You don’t need a heavy defensive defenceman to clear the crease, you need defensemen who can play within a system, who can move the puck and who don’t consistently make boneheaded mistakes. You don’t need a big winger or a big centre, you need forwards than can play well defensively and can move the puck in the right direction.

The Oilers must also do a better job at trying to fill holes by bringing guys in and moving them down than bringing guys in and moving them up. What I mean is they have to stop brining in guys who were AHLers and 4th liners on other teams and using them as 3rd and 4th liners on the Oilers. Why on earth would the Oilers think a guy like Will Acton could play in the NHL when he was a 3rd/4th liner in the AHL? When Dustin Penner was traded from the Oilers, he was basically a 1st line winger. When he got to Los Angeles they used him as mostly a 3rd line winger. Michael Frolik has been basically a 2nd line winger in both Florida and now Winnipeg, but was predominantly a 4th line winger in Chicago. Andrew Ference was a 2nd pairing defenseman in Boston and is playing 2 minutes more per game in Edmonton. It’s hard to make strides when you constantly bring in players to play roles they can’t really handle.

The Oilers look at their C depth and say “We need a 4th line C to play behind Gordon”, so they acquire Matt Hendricks who was a 4th liner in Nashville. I look at the Oilers C depth and I say “Gordon was a good acquisition and is a decent option as a 3C, but what if we could find another good C that pushes Gordon further down the lineup?”. This was part of the reason I pushed hard for Grabovski over the summer. I realize that it doesn’t happen in a vacuum and that both parties need to agree on a deal, but the Oilers history leads me to believe that they never really look to this level of player. It’s either super star or someone who fills the role of “physical player”, with very little of anything else.

The following is a list of all Oiler trades/signings/waiver pickups since the summer of 2010 (all free agent signings, except for a couple, are listed as July 1st for simplicity reasons): 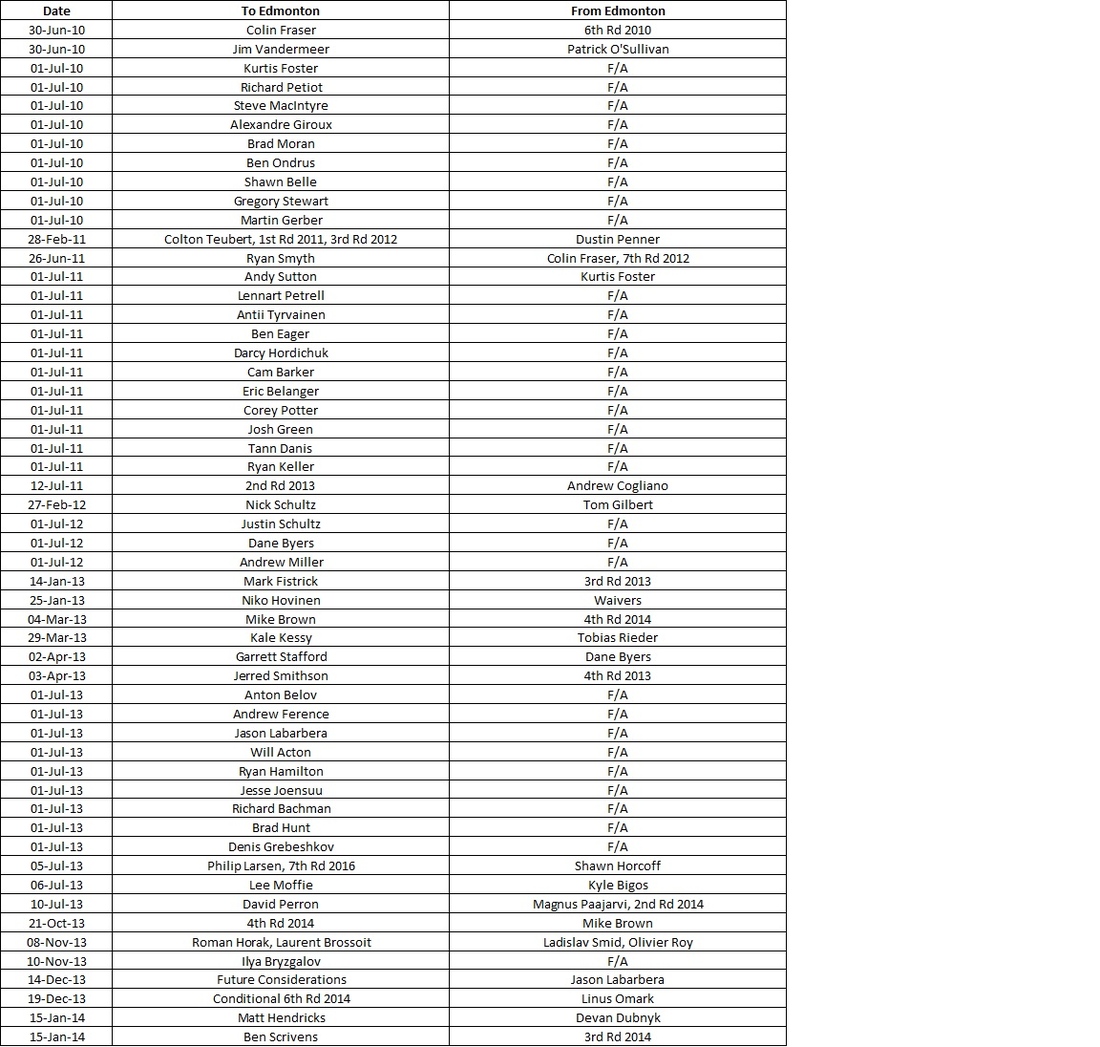 This list is horrifyingly bad, with Justin Schultz, David Perron, Ryan Smyth and Andrew Ference as the only skaters who solve any sort of issues with this team (and even at that, both Schultz and Ference are being played above where they should be and Smyth often has been). Also in that list are a few decent attempts that just didn’t work work out as well as could reasonably be expected (Eric Belanger, Anton Belov, Denis Grebeshkov). The rest is either AHLers or a dog’s breakfast of 4th liners and depth defensemen who the Oilers felt could improve the team. 52 players acquired and there are 4 you can look at that are good acquisitions (Scrivens is under assessment).

It’s very hard to improve your team with castoffs, especially when you are using size as the deciding factor over ability. It’s also hard to turn your club into a playoff team by using other team’s depth as part of your core.

Either the pro scouting can’t properly identify the types of players management needs, or management can’t identify what the Oilers actually need. This process needs to be fixed and it shouldn’t be that hard to figure out internally what’s gone wrong. If the scouts are identifying the wrong players for management, replace the scouts. If management can’t figure out how to fix the team, spend less time paying lip service to the analytic side of the game and maybe start taking some if it seriously. There’s no reason why people who get paid a lot of money to make these decisions correctly should have a worse track record at identifying good and bad moves than guys who do this sort of stuff as a hobby.