So MacTavish will take two goaltenders and set them before God. He will then roll dice to see which is to be preferred. The one the dice choose will be called on one to serve the team, while the other will be cast off into the wilderness. The first one will start game after game so that the players' future mistakes might be redeemed; the other will be sent away, clinging to his dying career, carrying the past sins of the team with him into the wilderness so that they might be forgotten.

Visiting Team Scouting Report: The Winnipeg Jets recently decided to fire their coach and hire a veteran hand in his place. The Jets aren't anywhere close to a playoff spot, but they have gone 2-0 since the coaching change. More importantly, the team's general manager isn't (just) trying to find scapegoat. He's also willing to point at the players ("we believe that we are underachieving") and take responsibility himself ("this is not without responsibility on my side"). An organization that holds everyone accountable is definitely a good first step towards improvement. 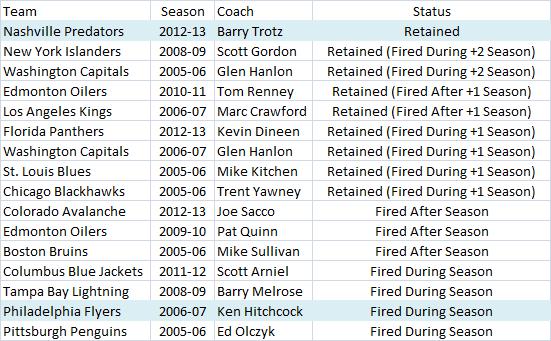