An Oiler For Life

Which Oiler will be the first to spend his entire career with the organization?

Share All sharing options for: An Oiler For Life

The Edmonton Oilers have a pretty amazing history. They started in a rival league. Five years after joining the NHL, they won the Stanley Cup. Then they won four more. They watched the best player to ever play the game during his prime, and had a supporting group that included another who unquestionably belongs in the conversation for top twenty, one of the best players ever to come out of Europe, and a couple more Hall of Famers for good measure. Yes, history is a place to look and smile after another noxious loss on the way to the lottery. But one thing the fans don't have is a player who stuck with the team through thick and thin, a player who, for an entire career, mirrored the commitment and excitement of the fans who cheer on the hometown team; they don't have an Oiler for life.

Unless you count Kevin Lowe. He was around during the glory years, came back for the it-was-glorious-in-its-own-way "Marchant-goal" playoff run, stayed as coach, and then as general manager. But he skipped the lean years of my youth and won a Stanley Cup with the Rangers in the process (an achievement he proudly displays in his office). Nothing wrong with that, of course, but it's not quite the same experience that Oiler fans endured over that period.

Then again, if you don't count Lowe, you might count Ryan Smyth. He was certainly present for the lean years that Lowe missed, and probably should have been an Oiler for life (Kevin Lowe said so himself). But when both he and Lowe got too stubborn for their own good, Lowe shipped him to the Island for three "premium" assets before leading the team into the kind of mediocrity that results in a person thinking that Steve Tambellini might do a better job. Smyth came back, of course, but the emotion on the day he was sent away definitely felt something like betrayal (Lord help me if my wife ever leaves me).

You could also count Jaroslav Pouzar, a player that Bruce wrote about many moons ago. He only ever played for the Oilers in the NHL, but at 186 regular season games played, his NHL career wasn't a long one (his hockey career, on the other hand, definitely was). Compared to the flagbearers on other clubs, Pouzar's 186 just doesn't look so good: 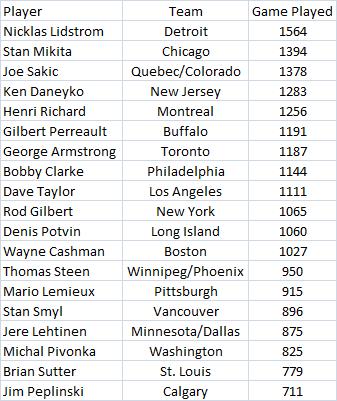 You'll notice that, of the 21 teams that existed when the Oilers entered the league, the only two missing from the list are Hartford/Carolina and the Oilers. With Shawn Horcoff being traded Ales Hemsky now officially staying (at least until the trade deadline), it's something I've been thinking about more over the summer. Is the first Oiler for life going to be Ladislav Smid or Sam Gagner. Or maybe Jordan Eberle or Taylor Hall. Or maybe that player never comes.