My first chance to cover a full NHL season for Copper and Blue begins October 1st. Sorta feels like it shouldn't have taken this long.

With the first games of the rookie camps getting under way and camps for the main roster beginning next week, I started to think a little bit about how much I'm looking forward to covering this season along with my truly amazing colleagues here at Copper and Blue. (That's not hyperbole either, I'm endlessly impressed at the calibre of writing and analysis my fellow contributors put forward on a regular basis). You may think its odd to be looking forward to another season of watching the Oilers given their (lack of) success since 2006, but then again, if you're an Oiler fan, you're probably starting to feel the anticipation too. The game of hockey is just in our blood.

It struck me though that I am particularly looking forward to having the opportunity to cover the Oilers as a writer moreso than just having the chance to watch the games as a fan. The idea that there will be consistent events on the calendar from October through April (and hopefully beyond? Maybe I'm getting ahead of myself) is exciting for me in the context of my role here at Copper and Blue because believe it or not...this will be my first chance to cover a full NHL season for this site.

I just checked my incredibly lucrative long-term contract and the date on it is April 10, 2012. The history books will show that this was three days after the end of the 2011/12 season. Using my abacus and the interwebs, I figured out that by the time the NHL season begins on October 1st, I will have been a contributor here for 538 days. During that period, I've had the opportunity to discuss, analyze, cheer, bitch, deride and celebrate about a grand total of 48 regular season NHL games and 0 playoff games. That means that less than 9% of the days since I began writing here have been game days that counted in the standings. 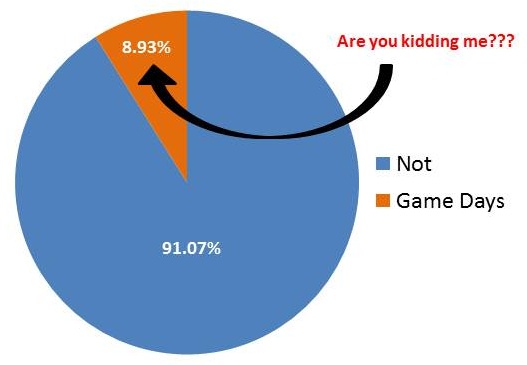 Now, part of the blame for that belongs to the Edmonton Oilers for missing the playoffs in 2011/12 and 2012/13, while the other portion of the blame rests with the NHL and NHLPA for wasting three months of last season arguing over something called "HRR". I've tried to block out the details. Sure, I was here for the duration of the bastardized season that took place last year, but with games being so condensed, the season basically consisted of game day previews, game threads and post-game summaries.

Whatever the reasons, the fact remains that my first chance to cover a full NHL season begins in a few weeks, and it is actually shaping up to be a season that carries some interesting storylines. We'll get into discussing all of them in greater detail in the days to come, but I can't wait to be discussing things like which defensemen are playing their way in or out of the line-up, which line combinations result in the best possession stats, which players are being deployed in which situations, the efficacy of the new coaches systems, and which players are wearing white skates. Well, maybe not so much that last one. Damn, White Skates.

Bottom line here folks, we are on the precipice of a new season, and putting the last 18 months of very little hockey in the past. So dust off your Oilers jerseys (if you're not still wearing them from last season), get the beer in the fridge, and for the stats nerds among us, fire up your spreadsheets, because damn it, hockey is coming!