The best of the best, narrowly edging out Blades of Steel.

When the Super Nintendo Entertainment System arrived in my household on Christmas morning in 1993, it was a truly joyous occasion. I was ten years old at the time, and my younger brother was about to turn nine that January; my older brother was twenty-one and had been living on his own in Jasper for several years, but was, as always, at home with family for Christmas. We all loved the Super Nintendo. My recollection is that we spent the entire day hard at play with a brief interlude for dinner, and though the system arrived at the same time as several other games, we spent more time with NHL '94 than any other. 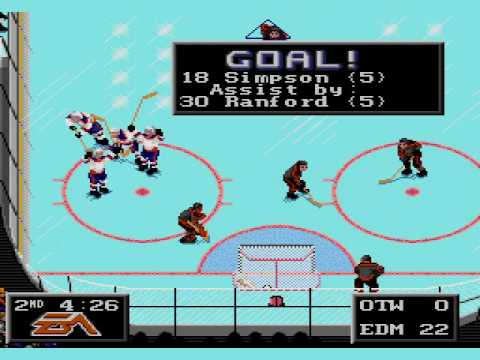 Now, my younger brother and I loved hockey. We both played on organized teams, we both collected hockey cards, we both decided that our artistic talents could be best put to use by trying to draw the logos of all twenty-whatever teams, and we both spent countless hours in the basement with friends, hockey sticks, and a tennis ball. Of those three things, only the friends were optional. There were many days when my brother would put on his foam goalie gear (at least until "real" pads showed up on a subsequent Christmas morning) and I'd be taking shots on him for hours, improvising play-by-play the whole time as we made our way through an imaginary version of the playoffs on what seemed to be a weekly basis. So when NHL '94 arrived, we were pumped.

It's important to remember that this was not a good time to be a fan of the Edmonton Oilers. Ted Green had just been fired after a 3-18-3 start (!), and though the club's record improved under Glen Sather, they were a terrible 9-23-5 at Christmas. Worse yet, the Calgary Flames sat in first place with a squad that looked like it might contend for a Stanley Cup (aside: they were eliminated in the first round). Basically, if we wanted to see he Oilers winning, it would need to happen in our imaginations. NHL '94 provided an amazing canvas, and you better believe the Oilers won a lot of Stanley Cups in our house that season.

As I got older, no other hockey game really captured my imagination like NHL '94 did, and so I kept coming back to it.

As I got older, no other hockey game really captured my imagination like NHL '94 did, and so I kept coming back to it. I'd always liked statistics, and would sometimes play an alternate version of the Oilers' season, tabulating each player's season totals as I went along (the video game version was generally a much happier version of history). When I was in junior high, my friend and I decided which one of us would have to approach our respective crush for a date based on the outcome of a best-of-seven series (we both ended up doing it, only to both be rejected). Today, I find myself chuckling at the statistics the game keeps--things like time spent in the attacking zone, and passing percentage (successful passes / total pass attempts)--which we couldn't get the NHL to track even if we begged.

As I'm sure you noticed, this was a sponsored post celebrating NHL 14's "NHL '94 Anniversary Mode" but I didn't have any hesitation writing about this particular topic. NHL '94 was a fun part of my childhood that provided hours and hours of entertainment... and if I'm being honest, it continues to bring happiness into my life as an adult. But that's not so weird, is it? I think we can all admit that the Oilers stand a much better chance of making the playoffs when I've got Doug Weight, Petr Klima, and Zdeno Ciger under my thumb.