The regular season is about to begin - has Craig MacTavish done enough to prepare the team?

As part of the SB Nation NHL preview (check here for the NFL preview) we've been asked to answer three questions facing the Oilers in the 2013-14 season.

Will Ryan Nugent-Hopkins rebound from a disappointing sophomore season?

Hopkins suffered through the 2013 season with a bad shoulder and it hindered him all over the ice. Though Steve Tambellini pulled him from the lineup far too late, thus guaranteeing that he wouldn't be ready for the start of the 2013-14 season, he will be back by November. And even though last year was a down year because of his lack of finish, he was still strong in all three zones:

For all that he handled the puck, RNH was charged with just 11 giveaways on the season, fewer than 15 other Oilers. He was also credited with 22 takeaways on the other side of the ledger for an excellent 2:1 TkA:GvA ratio. Among other Oilers with 30+ GP, only Hall (31 TkA, 29 GvA) was better than break-even.

By eye, Nugent-Hopkins is a 200-foot player who pays close attention to detail, and to process. He's an outstanding skater with exceptional edges, and puts those skills to good use whether he's supporting the puck, has it on his blade, or is in dogged pursuit of an opponent.

As long as the Oilers don't rush him back from the shoulder injury to make up for the loss of Sam Gagner, the skill will return and Hopkins will earn his new contract.

Is the Oilers forward group deep enough to support its top line? 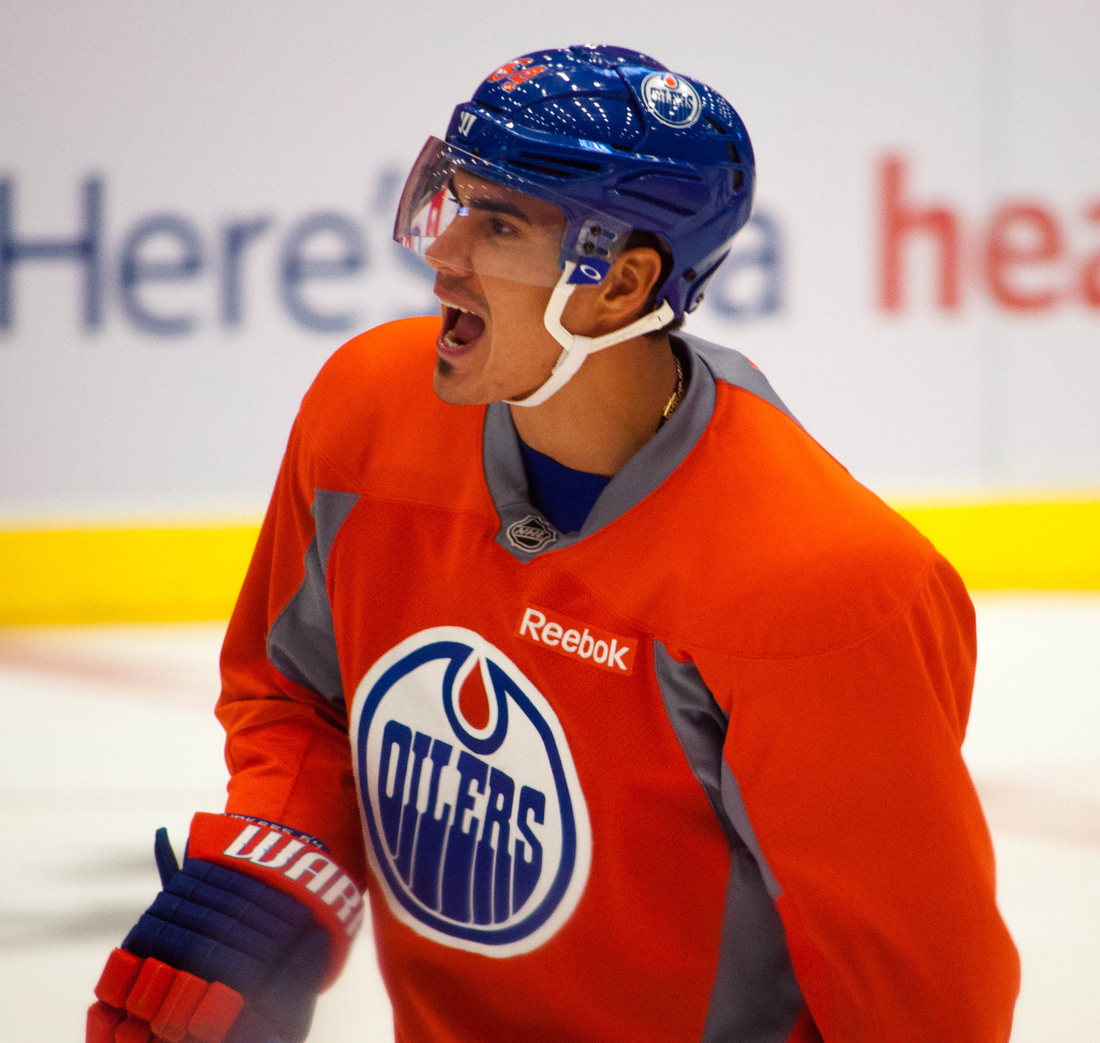 Photo by the wonderful Candace Riley, all rights reserved

Injuries have turned the top of the Oilers roster into a mishmash. Taylor Hall in the middle, Mark Arcobello getting significant minutes, Ryan Smyth with Taylor Hall, but at least that's to be expected. Dallas Eakins has to scramble to make things work. But Ales Hemsky, Taylor Hall, Nail Yakupov, Jordan Eberle, David Perron - that's a lineup of heavy hitters. They should be able to hold their own against anyone as long as Hall and Hemsky are healthy and being top competition.

But the bottom of the roster is a whole other monster. The need for "toughness" has turned the bottom of the Oilers roster into an NHL wasteland. The bottom seven forwards are: Will Acton, Mark Arcobello, Mike Brown, Ben Eager, Ryan Hamilton, Jesse Joensuu and Steve MacIntyre.

To put it succinctly:

Four AHLers and three players who punch more than they play. This is going to work out wonderfully.

Will team defense be improved from recent years?

For the first time since Pat Quinn was screaming at Lubomir Visnovsky about skating the puck out of the zone, the Oilers have some defensive depth. They still lack top-end defenders, but the days of also-rans like Jason Strudwick, Cam Barker and Ryan Whitney soaking up significant minutes are gone:

There was a time during the offseason when I thought that the Oilers might be pencilling in Oscar Klefbom for a spot on the team's bottom pairing this season. More than a few of the in the know MSM members were hinting that Klefbom had a legitimate shot at making the club out of training camp this season. My personal opinion is that this course of action would be completely nuts, and with a lot of teams I wouldn't put much stock in a story like this written during the summer when column inches are hard to fill, but the Oilers are a franchise that just loves to drop rookies into the lineup and see how things go. It seemed like a legitimate possibility.

That was before Craig MacTavish got busy adding defenceman to this team though. MacT had a busy summer and added so many that he has all but made it impossible for Klefbom to make the Oilers out of training camp. Where Klefbom once might have had a decent shot of grabing the number six, or seven spot on the Oilers' blue line, he's likely now slotted behind new comers Anton Belov, Philip Larsen, Andrew Ference, and Denis Grebeshkov who join a group that already included Jeff Petry, Ladislav Smid, Justin Schultz, Nick Schultz, and Corey Potter.