How many top players will reach unrestricted free agency?

Share All sharing options for: Next Summer's Unrestricted Free Agents

For the hockey world, summer is mostly downtime, a chance for players to train and recover from injuries, for fans to remember what it's like not to be in constant worry over one of their favorite pastimes, and for managers to take a vacation knowing that they're not likely to miss much action from around the league. The obvious exception to this is the first week of July when the league's teams spend like crazy on some of the league's most talented players in an effort to change their team's fortunes in a flash. Of course, the process would be a lot more fun if more really good players actually made it to free agency.

Almost every summer, it's the next year's crop that looks like a deeper free agent class, and this summer was no exception. There's nearly always a sense that waiting another until "next year" will provide better opportunities. The problem is that, over the course of the season, a lot of the potential unrestricted free agents end up getting signed, thus weakening the free agent pool. As a result, I decided that it would be fun to compose a list of the top 75 players scheduled to become unrestricted free agents next summer, and then check in on that list each month to see how many of them still haven't signed. My list of pending free agents (with their age on July 1, 2014 in brackets) is below: 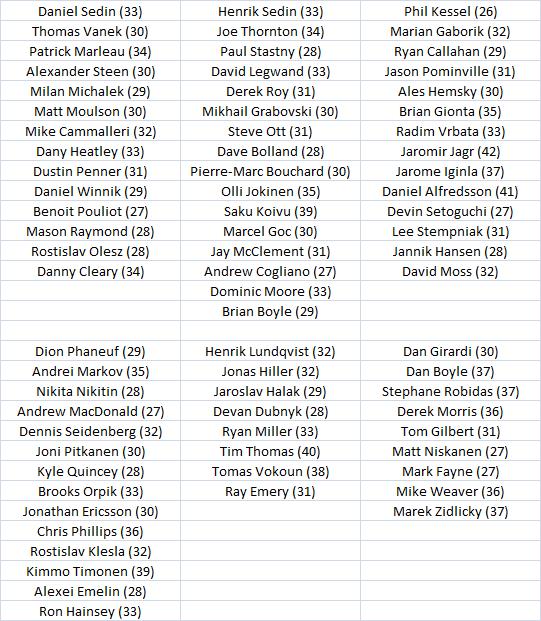 If there's a player I've missed, let me know who it is, and which of the players on this list you'd remove to fit him in. I won't change the names every month, but will probably make a couple of changes between now and the month of October. The lists are in loose order by position (Andrew Cogliano is listed at center mostly to bug Derek), but I didn't use any kind of rigorous model to decide whether Jonathan Ericsson, for example, should be right between Brooks Orpik and Chris Phillips, so feel free to criticize that too!