He's hit some peaks and valleys in his career so far. Can Eberle split the difference this season?

It's amazing how quickly the bloom can be off the rose in hockey. Before last season, people were doing crazy things like rating Jordan Eberle in front of Taylor Hall and giving him a more prominent jersey letter than Hall. This was, of course, all based on an anomalously high scoring season in 2011-12 that witnessed Ebs getting near the hallowed point per game pace (0.97 PPG), in large part because of unsustainable shooting percentages.

In the due course of last season, Eberle came back down to Earth in terms of percentages (if you can call shooting 12% "Earth"), and his PPG tumbled down to 0.77. What's curious is that this was in the face of improving underlying shot metrics, with Eberle leading the team in Corsi. So his luck went down a bit, but his ability to create positive shot differentials increased.

With the past picture painted, what's in store for him this season? To answer this, I created a sample of forwards who had a rookie season of greater than 30 games at the age of 20 or 21 after 1998-99, then had a 2nd season in the NHL at the age of 21 or 22, etc, all the way to a 4th season at the age of 23 or 24. This exercise resulted in a sample of 57 such players, including superstars like Alex Ovechkin or Evgeni Malkin and normal rubes like Matt Cooke and Oleg Kvasha.

How does the average player in this sample size improve over time?

The sample group's average PPG increased every year between their 1st and 4th, but the rate of growth changed quite substantially, with it speeding up quickly in the 2nd year at +18%, slowing down to a crawl at +3% in the 3rd year, only to recover somewhere in between at 10% in the 4th. Unlike the smooth downward acceleration of Taylor Hall's cohort, this one seems to be a bit more erratic.

And if we're going to talk about erratic movements in data, just have a look at Eberle's first 3 seasons. He's been up 56% and then down 21% the very next season. The only player I can find with similar undulations and levels of production was Alex Tanguay (who had a 4th season somewhere in between his hot 2nd and cold 3rd, a pattern Eberle would probably like to reproduce).

To try to estimate Eberle's 4th season production, I'll create a regression model to try to explain my sample's 4th season PPG level by using PPG levels from previous seasons and changes in their time on ice. The first step is to test the model out using various combinations of variables. Does the model need each single previous season's PPG? Or does it only need one or two to maximize it's predictive power, and throw out the rest? It turns out that for this model, it didn't care at all about the players' first year point production, focusing only on 2nd and 3rd year PPG levels, along with changes in time on ice in the 4th. So that's what I used for the model, leaving 1st year point production out entirely. 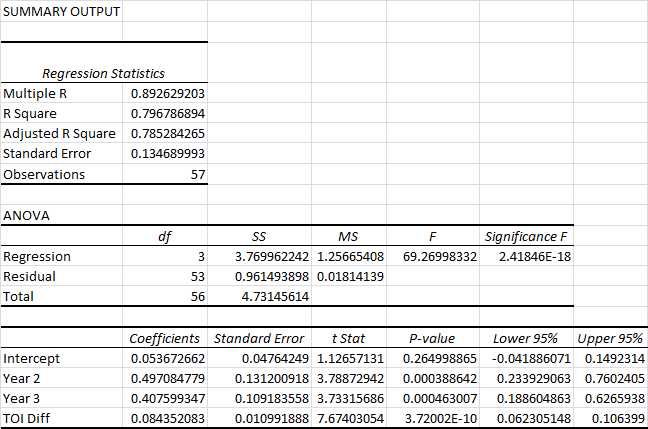 Our r-squared correlation is 0.797, meaning that our model can explain almost 80% of the variance in the observed 4th year point production in our sample. The remaining variables all have very strong explanatory power, easily passing a 95% level of significance test. Using the coefficients above, our formula will look like this:

Now we just have to provide an estimate for how Eberle's time on ice will change in his 4th year. We have a new coach, so certain players' ice time may be in flux. I think Eberle may be a prime candidate to see his ice time stagnate a bit this year. He's already been put on the 2nd power play unit, meaning he may see his 5x4 power play time decrease by up to 30 seconds per game compared to the average of his 2nd and 3rd seasons. He's also starting the season on the ostensible 3rd line at even strength, likely running shotgun to Arcobello and Joensuu. I've already provided an opinion about how Yakupov's icetime is likely to increase substantially this year, and I'd bet on Hemsky's icetime recovering substantially from the 15.5 he saw last year (since we finally have a coach that seems to love him again). This will really have a dampening effect on Eberle's time on ice. His TOI in his 2nd and 3rd seasons was 17.6 and 19.0 minutes, resulting in a 2-year average of 18.3 minutes. I'll estimate that his TOI will change 0.4 minutes above his 2-year average to 18.7 minutes, or 0.3 minutes below his 3rd season's total.

This results in a formula for Eberle of:

Over an 82 game schedule, this would result in a season of about 72 points. If we apply Eberle's historical goals to assists ratio, we'll get a predicted scoring line looking something like:

Obviously, if he misses any games those numbers would decrease commensurately. I also think there's a lot of downside risk to this forecast, seeing as he'll be starting the season with Arcobello as his Centre instead of Ryan Nugent-Hopkins. But I think there's a decent shot of RNH missing less than 12 games this season, which would reload Eberle's offensive potential in a hurry.