He's reached elite status: where does he go from here?

Entering his fourth season in the NHL, there are very high expectations of Hall for the upcoming campaign. He was the first first overall pick to emerge from the womb, and he has improved rapidly as each season progresses. Can he continue his trend upwards? Let's have a deeper look and try to predict what his points output will be this season

To begin, we need a representative group of NHL players to get a sense of what we should expect from Hall, who were similar in age and experience to him every step of their careers. Therefore, I looked for forwards who played in at least 30 games in a rookie season at the age of 18 or 19, who then proceeded to play 30 games in each successive season through a 4th season in the NHL at the age of 21 or 22. I found 32 such players since 1999, including 8 other first overall forwards. Generally, these kids are very good NHL players, with only a few rushed failures lining the gutter.

So, how did this sample progress over their first 4 years? Here's a table that shows how this sample's points per game average progressed from season to season:

Ahh, but what about those 8 first overall selections? They must have an ability to continue their progressions well into their 4th years in the NHL. Right? Well.... 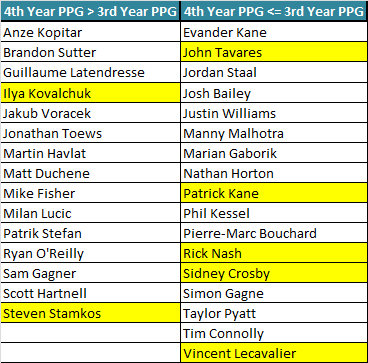 We see that 15 players improved, while 17 players declined or stayed the same. It's not like the players fell off the face of the Earth -- it's just that they seemed to maximize their potential quite early on.

However, as I found in coming up with Nail Yakupov's projection, ice time does have a major impact on that 4th year production. If a player's 4th year's ice time is substantially above or below their last 2 years' average ice time, you're very likely to see their PPG follow.

I ran a regression using each of their first 3 years' PPG rate and the change in icetime in their 4th year compared to the average of their previous 2 seasons. Here's the output: 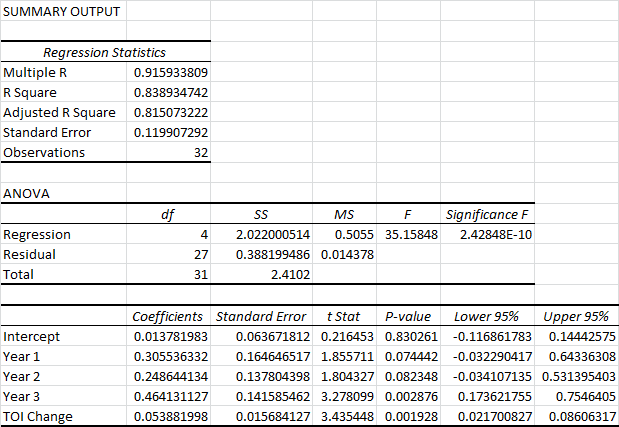 The important numbers here are the R-Square correlation, which at 83.9% suggests that our independent variables can describe 83.9% of the variance in our sample set. This is good.

The coefficients suggest a formula as follows:

Also, it seems like the model is putting most emphasis on the third year scoring rate, but considers the 1st year scoring to be more important than the 2nd year scoring. Perhaps this is a reflection of the importance of "pedigreed" rookies who come in to the league with a bang.

Now, to use this formula to predict Taylor Hall's 4th year PPG, we'll need to estimate his time on ice for the upcoming season. His time on ice has progressed as follows in his first 3 seasons: 18.2 mins, 18.2 mins, 18.6 mins. So, rather consistent. His average icetime over years 2 & 3 is 18.4 minutes. How much more than this will he log this season?

If you just look at the 1st overall selections in this sample, they logged an average of 20.4 minutes in their 4th seasons (which was also what they averaged in their 3rd seasons). It seems like Hall has some catching up to do to match the average ice time of his elite peers. With the recent injuries, it also looks like Coach Eakins will need to especially rely heavily on Hall, moreso than his coaches of years past. Eakins has been quoted in the press about increasing Hall's icetime. I think it's safe to assume that he'll play noticeably more. Let's assume his TOI will increase about 2 mins from his most recent 2 seasons' average, from 18.4 minutes to 20.4 minutes.

Therefore his formula would be:

Over an 82-game schedule, this rate of scoring would translate into 86 points. 1.05 PPG is obviously a decline from the 1.11 PPG he posted a year earlier. But looking at how top players have progressed, this is simply reflecting how others have progressed in the past. Some have done better in their 4th years (Kovalchuk), while some have done much worse (Nash). Hall could end up almost anywhere, but he has the highest shot of just falling short of how he did last year.

Translated into goals and assists, I'll estimate his scoring line to be something like:

Obviously, if he misses any amount of time, these numbers would decrease.

When was the last time the Oilers had two 30 goal scorers? That would be 1996-97, when Ryan Smyth and Andrei Kovalenko had 39 and 32, respectively. My projections for Taylor Hall and Nail Yakupov are forecasting exactly that.