An wonderful juxtaposition from 27 years ago shows how pervasive the "toughness" mentality can be, and how simple it is to refute.

As I combed through the Google news archives while researching a story, I stumbled onto a wonderfully asymmetrical moment in time. It was April 12, 1986, and the Edmonton Oilers just wrapped up a three-game sweep of the Vancouver Canucks by beating them 5-1 at the Pacific Coliseum. The Oilers were at the height of their powers - they won the cup in '84 and '85. The team won 56 games in the regular season and amassed 119 points. They scored 426 goals, 72 more than the second-highest scoring team in the league.

The Canucks were a bad team - they finished with 59 points for the second season in a row and their 23 wins were the fewest of any playoff team. The series was brutal - Edmonton outscored Vancouver 17-5 in three games and Grant Fuhr said of the 5-1 score in the third game: "The score flattered them. Without Brodeur playing so well, maybe we would have won 10-1."

How did a very bad team, think they should solve their problems? Below is a screencap from the Google archives of an article written by Jim Matheson about the post-series fallout: 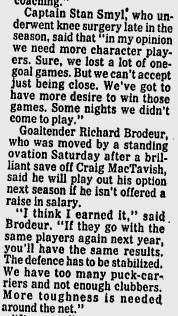 Captain Stan Smyl, who underwent knee surgery late in the season, said that "in my opinion we need more character players. Sure, we lost a lot of one-goal games. But we can't accept just being close. We've got to have more desire to win those games. Some nights we didn't come to play."

Goaltender Richard Brodeur...
..."If they go with the same players again next year, you'll have the same results. The defence has to be stabilized. We have too many puck-carriers and not enough clubbers. More toughness is needed around the net."

Clubbers and toughness were the difference. It's worth noting that through 80 regular season games, the Oilers served 1900 penalty minutes, or 23.75 per game. The Canucks took 1791 minutes worth of penalties, or 22.38 per game. The Oilers fought 90 times that season. The Canucks fought 92 times.

Contrast the Canucks' reaction with that of Dr. Randy Gregg, the Oilers' stay-at-home defenseman and possessor of the tape-to-tape zone exit, in the same article:

Dr. Randy Gregg, the spoft spoken red-haired defenceman, anticipates the Calgary series will have it's share of extra curricular activities. "Fights will occur but they won't be crucial. Maybe the will dictate the momentum for awhile but the games will be decided by the skill of the players. Fights don't score goals."

It's a familiar tune: the really bad team thinks things like toughness, character and "clubbers" will turn the team around. The really good team already knows - the game is decided by skill.

More: Edmonton's Greatest Hockey Hero The Value Of An NHL Goon The Oilers Are "Harder To Play Against"