The Edmonton Oilers have been an NHL franchise since 1979 and about once per decade they try to honour that heritage with some sort of commemorative jersey. In reality, the franchise's roots date back to the early 70s. In 1972 the WHA started as a competing league to the NHL and the Oilers, originally the Alberta Oilers, were one of the founding teams of that league:

In 1973 they changed their name to the Edmonton Oilers and the rest is history.

The blue and orange jersey is an icon of the Oilers dynasty years if the 80s. The copper and blue (no offence) was the icon of the crappy 90's and early 2000's. In 2001 the Oilers introduced one of the best third jerseys in the NHL and as of 2010 have gone back to the blue and orange. Although the blue and orange have been the relative main stay of the Oilers organization they have never really paid tribute to their WHA years, in fact, they flat out ignore the WHA years. 2013 will be the 40th year that the Edmonton Oilers have existed as a franchise (I turn a blind eye to the Alberta Oilers for this article) and as such the franchise should pay tribute to their WHA roots.

It's time that the Oilers bring back their orange and blue jerseys. I am aware that these were the team's away jerseys in the WHA but its still a great way to pay tribute to those WHA years. The Oilers at the time also had 2 different team crests, one similar to the traditional crest we know today and the other similar to the image shown below:

Now, I'll be the first to admit that this crest is fugly, and not very nice for the camera but it does have a historical appeal to it. But I digress, the crest isn't the focus of my suggestion, but I thought it interesting enough to point out. A couple of years ago, the Oilers began assigning their defencemen orange practice jerseys and I've come to appreciate them - they're quite nice. The colour is a bit bright but can be toned down to a less eye-bleeding colour. I think that the concept of the practice jersey can be transformed into a third jersey and really pay tribute to the WHA.

The practice jersey is the basis of a very nice design courtesy of Justin Wiltron. Below is Justin's concept jersey that closely aligns to my idea of paying tribute to the Oilers of the WHA. 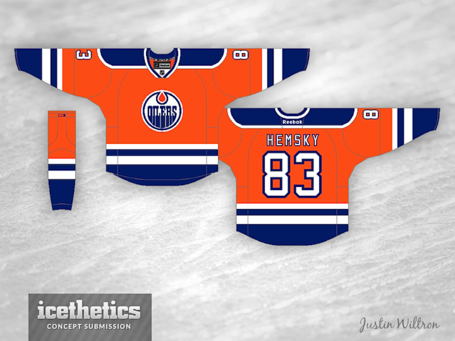 Justin and others have come up with some great jersey designs, available here, that would work really well in the vein. Using this concept as a template I came up with a quick design and although not fantastic it serves the purpose for this post. 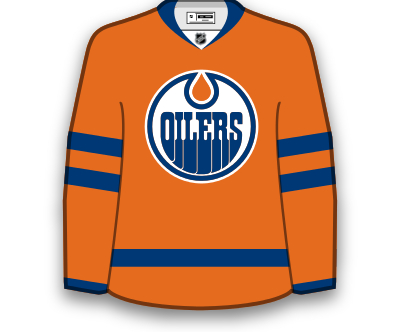 I think an orange and blue jersey would be the perfect tribute to the 40 years of Edmonton Oilers Hockey what do you think?

Download a blank design template, and submit your entries here in the comments or as your own FanPost.

Should the Oilers have an orange third jersey?