He's proven he can swing a sack of door knobs. The question now is: how many more knobs can we fit in the sack?

As the new season approaches, we'll probably see quite a few predictions about how certain players will perform, scoring-wise. Last season, I wrote articles about how I'd predict certain players' scoring levels, and I'd like to reprise that series over the next 2 weeks. I won't write about everyone, because I sincerely doubt I have the energy to feign interest in how Ryan Jones will score this coming season. But I'll try to hit some of the more interesting names on the roster that have the highest uncertainty.

There's not a player on the Oilers roster that I'm more interested in this year than Nail Yakupov.

There's not a player on the Oilers roster that I'm more interested in this year than Nail Yakupov. He was recently ranked #2 in our Top 25 Under 25 series, and I'd say there's a non-trivial shot that he ends up ranked #1 a year from now. Aspects of his game remind us of great players, but he's building a reputation of his own, combining every necessary offensive ability in large doses. And after a mid-season dirge, he ended last year on a tear, putting up 15 points in his last 15 games. What can we expect from him?

Well, it's complicated. Last season I had some fun trying to pin down RNH's potential 2nd year scoring output, simply because having only one season of data makes predictions incredibly difficult. It's hard to be sure whether that rookie scoring output was abnormally high or low, as some players progress in their 2nd years while others falter.

I found the PPG scoring rate in both seasons for each player, and then calculated their average time on ice per game (that I'll refer to as TOI). I ran a regression to find a formula that used a player's Year 1 PPG and the difference in TOI between their 1st and 2nd seasons to predict their 2nd year PPG.

My new formula for predicted a 2nd year teenage player's performance is as follows:

I realize that having a negative intercept here is illogical, but it's close enough to zero that forcing a zero-intercept would provide little value.

What this formula is telling us is that if you received the same average ice times between your first and second years, your scoring rate would only increase negligibly. This is an interesting observation, as many people would assume that scoring increases in teenagers would mostly be due to maturation, experience, etc, yet this suggests any substantial increase in PPG scoring can largely be attributed to increases in ice-time. There's a bit of chicken and egg here, as I'm sure you'd only be getting those added minutes if you were a better player, but there it is.

The formula suggests that playing an extra minute of ice time per game will result in a PPG scoring increase of about 0.06 -- so a player who scored 0.50 PPG as a rookie, who sees his icetime increase by one minute in his 2nd season, will score at about 0.56 PPG.

It's no coincidence that the largest jumps in rookie-to-sophomore scoring were accompanied by gargantuan increases in ice time. 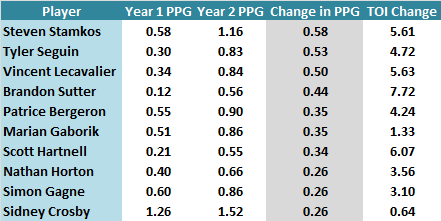 This shows the top 10 increases in 2nd year scoring in forwards since 1998. The classic supernova scenario is Stamkos, who went from a middling 0.58 PPG in his rookie year to 1.16 PPG in his 2nd season -- people don't really talk about the extra 5.5+ minutes in ice time he got in that second year. The only player to really accomplish a hefty gain here without a whole lot of extra time on ice was Crosby.

That's not to say it's not possible. Taylor Hall would be a classic exception to the rule. He scored 0.65 PPG in his rookie year, and had the exact same average TOI in his 2nd year, yet increased his PPG to 0.87. The model tells us the odds of that happening were about 3% -- or, if 100 teenage rookies put up 0.65 PPG and had identical TOI their next seasons, about 3 of them would score as much as Taylor Hall did.

As an aside, this model would have predicted a PPG for RNH this past season of 0.92 based on his moderate TOI increase and his 0.84 PPG as a rookie, yet he ended with 0.6 PPG. There was about a 2% chance of this happening (the lower bound on his 95% confidence interval was 0.63 PPG). I'd bet a month's salary that his PPG will rise substantially this season.

Anyways, how does this all suggest Yakupov will fare? First, we have to establish what we think his 2nd year TOI will be. In his rookie season, Yakupov played about 11.9 minutes at even 5 on 5 and about 2.4 minutes on the 5x4powerplay -- all part of what added up to his 14.6 minutes of ice time. Of course, we don't know what his 2nd year TOI is yet, but I think we can make some pretty logical deductions about what it will be.

Over recent history, Oiler players seem to max out at 3 mins of 5 on 4 power play time per game, so I'll estimate Yakupov will see his 2.4 minutes rise to about 2.9 minutes. His 11.9 mins of 5 on 5 time last year were very low, good for 7th on the team or 3rd line minutes. First-line Oilers received about 15 minutes of icetime. With the way the lines are shaping up (a bit of a mish-mash of the true depth chart), I'd bet we'd see a more even doling up of icetime between the 1st, 2nd, and 3rd lines than we did in the past. This will help Yakupov's case, no matter which centre he lines up with. I'll suggest that he'll see a 2 minute jump in even strength ice time, up to about 13.9 minutes per game. Add that to the 30 seconds extra on the powerplay, and we get an estimated additional ice time of 2.5 minutes, moving from 14.6 mins per game to 17.1 mins per game, matching my impression of Yakupov this year as almost a 1b-type winger (but obviously not the club's only really good option).

Let's put this all into the formula:

We can also say that we have 95% confidence that his PPG rate will be between 0.52 and 1.07. Of course, if his TOI does not stack up to my projections, that confidence interval would change.

Applied over an 82 game schedule, 0.8 PPG translates to about 66 points. Using his goal to assist ratio from last year as guidance, I'd estimate his 2013-2014 stat line to be something like:

So there's a 50% chance he scores above that rate, and a 50% chance he scores below that rate. I would personally be very surprised if he goes Stamkos-style interstellar this year and hits 1.1 PPG+. Firstly, there are two other quality right wings in Yakupov's line of sight, in Jordan Eberle and Ales Hemsky. This has to be the best roster of right wings in the entire league. Secondly, he's not going to all-of-a-sudden be playing with an established Hall of Famer (as in Martin St. Louis). He is likely to see time with Ryan Jones, Boyd Gordon, and David Perron, and not just riding shotgun with Taylor Hall or Ryan Nugent-Hopkins.

That being said, an increase from 0.65 to 0.80 would be very encouraging for him and the organization. If we have two right wingers at or above that mark by season's end, there's a very good chance the Oilers will have been a competitive team in 2013-2014.

Here's the entire list of forwards in my 52 player sample: